Readers here might remember Linda’s extraordinary writing journey. I’m honored to play a part in welcoming her debut novel into the world.

It’s Mississippi in the summer of 1955, and thirteen-year-old Rose Lee Carter can’t wait to move north. But for now, she’s living with her sharecropper grandparents on a white man’s cotton plantation.

Then, one town over, a fourteen-year-old African American boy, Emmett Till, is killed for allegedly whistling at a white woman. When Till’s murderers are unjustly acquitted, Rose realizes that the South needs a change . . . and that she should be part of the movement.

Linda Jackson’s moving debut seamlessly blends a fictional portrait of an African American family and factual events from a famous trial that provoked change in race relations in the United States.

Typically, a story idea comes first. But with this book, my first stab at historical fiction, it was an era. I knew I wanted to write a story that included the Emmett Till murder. Hence, 1955.

Next came the character. Many African Americans were migrating to the North before and during this time, and some of them were mothers who, for various reasons, left their children in the South to be raised by grandparents. My main character, thirteen-year-old Rose Lee Carter, happens to be one of those children.

Finally, the story idea came to me. Besides the Emmett Till murder being woven into the story, what would be the premise? I couldn’t think of one until I read the book Vernon Can Read!

by Civil Rights activist Vernon Jordan. In his book he stated that his family was not concerned, one way or the other, about the Civil Rights Movement or what white people did or did not allow black people to do. They set out to enjoy their lives despite their circumstances in the South. I thought, “How interesting! Not every black person was concerned about equal rights.” This also explained quite a bit about my own Mississippi Delta family. I often wondered why no one in my family was ever involved in the Civil Rights Movement, or even spoke about it, for that matter. And from that concept I found my premise: A young girl who longs for something more than the cotton fields of Mississippi, yet she is being raised by grandparents who are content with their segregated Southern existence and even resistant to the quickly approaching Civil Rights Movement.

Most of my research was done via the Internet. I read many online articles about the Emmett Till case, plus I was able to find the entire FBI transcript of the case online. I also read books—both fiction and nonfiction—either about the case or simply with a 1955 Mississippi setting. Additionally, in order to get a good grasp on the time period, I read other works of historical fiction set in that time period, regardless of the plot/characters.

Since I was born and raised in the Mississippi Delta, and spent most of my childhood in sharecropper shacks that were not nearly as nice as the one in which I have placed Rose and her family, some of the scenes in the novel are based on actual events that occurred during my own childhood. What I found, while reading other works set in 1950’s Mississippi, was that conditions had not improved much between 1955, when Rose was coming of age, and 1975, when I was coming of age.

I feel comfortable beginning a draft when I know I have a strong enough premise to complete a novel. I need to have a starting point (date/timeframe) and an ending point. With this novel, my starting date is two days before Emmett Till’s 14th birthday, which was July 25, 1955. The novel ends a week and two days after his murderers are acquitted, which was October 2, 1955. My original starting date was Emmett Till’s actual birthday (July 25) and the end date was sometime in January. But after I began drafting, the structure changed as I found more material and story to fill the timeslot between July and October than I had anticipated.

I continue my research through the Internet and any print material that comes my way. Oh, and I will purchase books if I’m not able to find the material online or at the library. Many of the books I’ve purchased for research are good books to have in my personal library anyway. Plus, they’re tax-deductible.


Too much discovery! I could spend all day reading and might not ever get to the actual writing!

Turning fact into fiction! I absolutely love that—gathering all these facts then weaving them into a setting with dialogue and narrative. I love the challenge of providing information to the reader while putting them inside the story at the same time.

Making sure you get those facts right! If you don’t, the people who are familiar with that time, place, people, or events, will have no mercy when it comes to criticism. Of course, no one is perfect, and even memory isn’t perfect. So there might still be a fact or two that we don’t get right. And all we can do in that case is pray our readers have mercy and remember we did our best to get all the facts straight.

Well, I actually learned two things that sort of blew my mind during the research. One, my mom said she “thought” she knew of someone who was involved in the Emmett Till murder. But during my research, I found someone that I did know who was involved. Can you imagine my shock when the name turned up in the research? And two, I found out that the place where the murderers originally planned to take Emmett Till in order to “scare” him was in my hometown. So the story became even more real to me as a result of these two discoveries. I felt a personal connection to the story.

Has your research ever affected the overall trust of your book? How so?

Yes! There was so much conflicting data regarding the Emmett Till case that I basically had to pick the sources I thought would be the most reliable. Then there were other facts that I simply had to leave out of the story due to so much contradictory data on the case.

In order to make the Emmett Till case relevant to my main character, I had to somehow make a connection between her family and the family of Mose Wright, the great-uncle that Emmett Till was visiting in Money, Mississippi, when he was murdered. Since I didn’t want to go overboard with tying real historical figures to fictional characters, I tried to get away with only one line stating that Rose’s grandfather and Mose Wright went “way back.” But my editor (Elizabeth Bewley) said I needed to make the connection stronger. And, of course, she was right. So I had to carefully weave in a few more connections without going overboard. I know this isn’t necessarily changing history, but it involved the trickiness of marrying fact and fiction.

For me, this book in particular was important because I needed to understand my own past. My mother didn’t register to vote until she was in her 50’s, and that was because for the first time, an African American was running for mayor in our small town. Furthermore, I don’t think she would have registered then if someone hadn’t come to our house, picked her up, and actually taken her down to the courthouse to register. Writing this book helped me understand that. My mother, and many other African American people in the South, hadn’t registered to vote because they could have been killed for doing so. Killed! Just for registering to vote. I knew this in a shallow kind of way. But writing the story helped me understand it. It helped me feel the fear. And I hope my readers will, too.

Also, regarding Emmett Till, I often asked myself, “Why would his great-uncle Mose Wright allow Roy Bryant and J.W. Milam to take him away from the house in the middle of the night when he knew his life was in danger? Why would he suggest they just ‘whup the boy’ and let it be?” Again, writing this book helped me understand Mose Wright’s predicament, which was quite heartbreaking.

Writing the book, I set out to answer the question, “Why didn’t more people stand up for their rights?” But my editor has stated that the book will make young readers ask the question, “What would I have done?”

Caroline, THANK YOU, for allowing me to be a part of your blog today and to introduce readers to Midnight without a Moon. I am excited to give them a first look at the cover, which was illustrated by Sarah J. Coleman, who illustrated the covers for Sharon Draper’s Stella by Starlight

, and the 50th anniversary edition of Harper Lee’s To Kill a Mockingbird

Giveaway: Houghton Mifflin Harcourt is kindly offering one ARC of Midnight without a Moon. The contest closes Monday, February 1. US residents only, please. 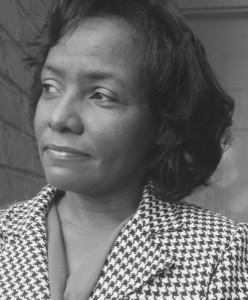 Born and raised in the Mississippi Delta in the teeny-tiny town of Rosedale, Linda Williams Jackson likes to spin stories about everyday people in small-town settings. Though she has lived in a few other states (Alabama, Missouri, and Kansas), Linda currently makes her home in a not-so-small city in Mississippi with her husband and three children.

While a degree in Math and Computer Science from the University of Alabama allowed her to enjoy careers in Information Technology, Linda now prefers manipulating words rather than numbers and symbols. Besides her forthcoming debut middle-grade novel Midnight without a Moon

from HMH Books for Young Readers (January 3, 2017), Linda is published in multiple Chicken Soup for the Soul titles and has written reading assessment passages for various educational publishers. Find her online at www.jacksonbooks.com.