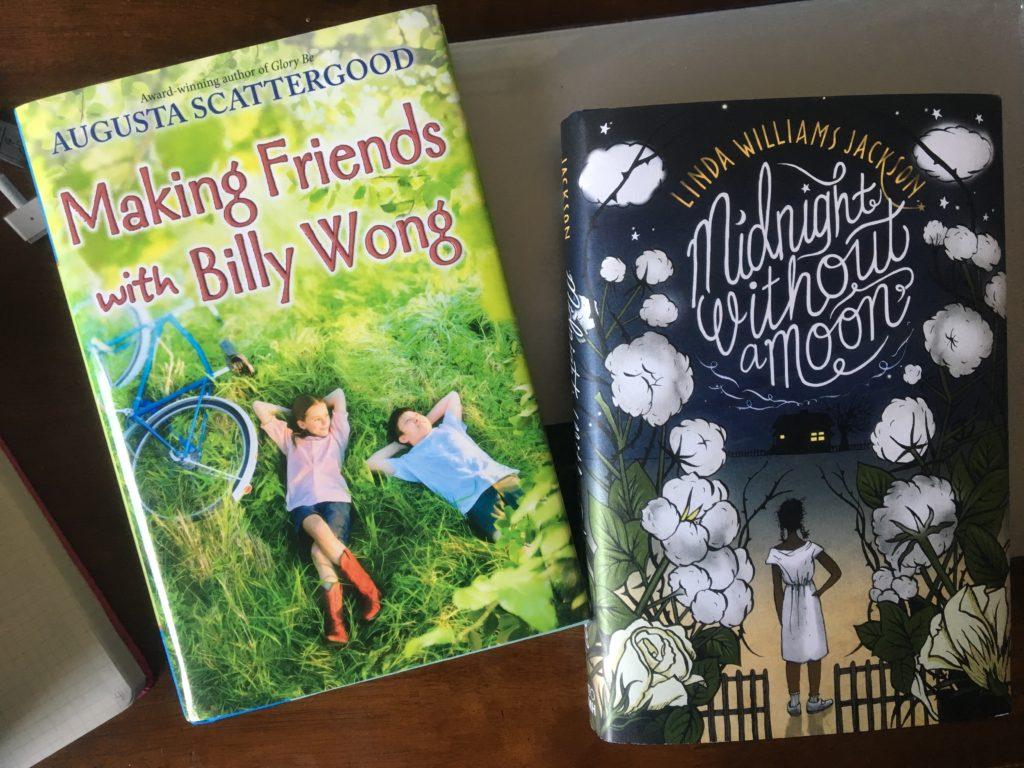 So many good books have recently published or are about to be released! These six will soon be featured / have already been featured on the blog. Here’s a brief description of each and when you can expect to read more about them. (All descriptions are taken from Amazon.)

Azalea is not happy about being dropped off to look after Grandmother Clark. Even if she didn’t care that much about meeting the new sixth graders in her Texas hometown, those strangers seem much preferable to the ones in Paris Junction. Talk about troubled Willis DeLoach or gossipy Melinda Bowman. Who needs friends like these!

And then there’s Billy Wong, a Chinese-American boy who shows up to help in her grandmother’s garden. Billy’s great-aunt and uncle own the Lucky Foods grocery store, where days are long and some folks aren’t friendly. For Azalea, whose family and experiences seem different from most everybody she knows, friendship has never been easy. Maybe this time, it will be.

Inspired by the true accounts of Chinese immigrants who lived in the American South during the civil rights era, these side by side stories–one in Azalea’s prose, the other in Billy’s poetic narrative–create a poignant novel and reminds us that friends can come to us in the most unexpected ways.

It’s Mississippi in the summer of 1955, and Rose Lee Carter can’t wait to move north. But for now, she’s living with her sharecropper grandparents on a white man’s cotton plantation.

Then, one town over, an African American boy, Emmett Till, is killed for allegedly whistling at a white woman. When Till’s murderers are unjustly acquitted, Rose realizes that the South needs a change . . . and that she should be part of the movement.
Linda Jackson’s moving debut seamlessly blends a fictional portrait of an African American family and factual events from a famous trial that provoked change in race relations in the United States. 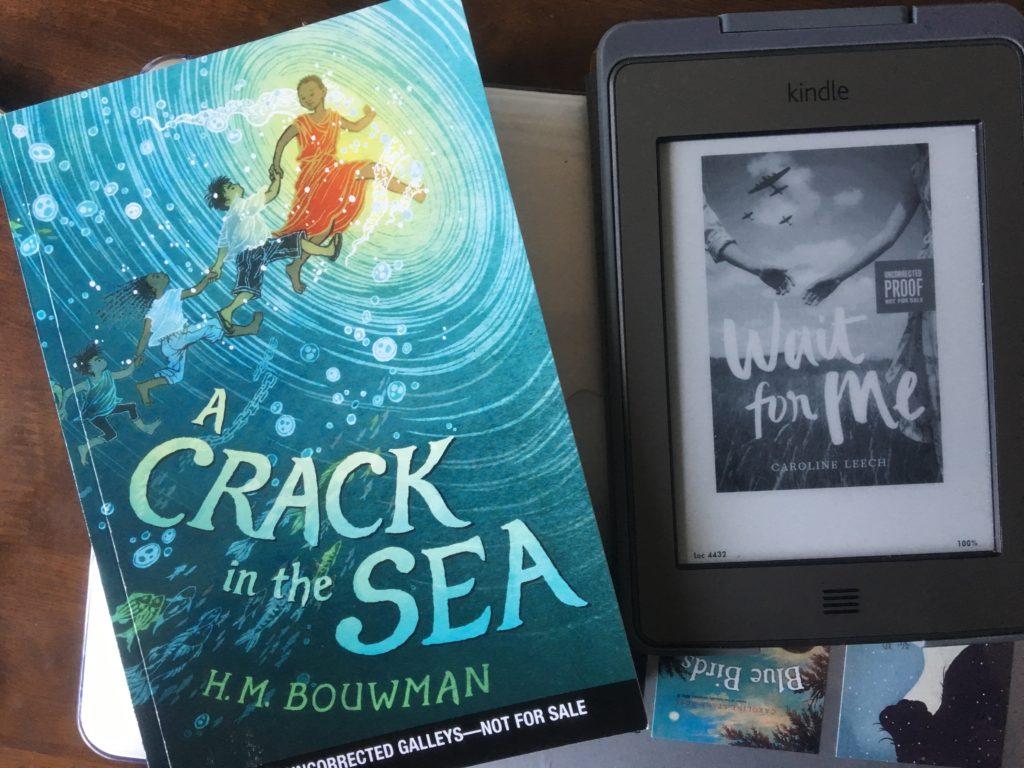 No one comes to the Second World on purpose. The doorway between worlds opens only when least expected. The Raft King is desperate to change that by finding the doorway that will finally take him and the people of Raftworld back home. To do it, he needs Pip, a young boy with an incredible gift—he can speak to fish; and the Raft King is not above kidnapping to get what he wants. Pip’s sister Kinchen, though, is determined to rescue her brother and foil the Raft King’s plans.

This is but the first of three extraordinary stories that collide on the high seas of the Second World. The second story takes us back to the beginning: Venus and Swimmer are twins captured aboard a slave ship bound for Jamaica in 1781. They save themselves and others from a life of enslavement with a risky, magical plan—one that leads them from the shark-infested waters of the first world to the second. Pip and Kinchen will hear all about them before their own story is said and done. So will Thanh and his sister Sang, who we meet in 1978 on a small boat as they try to escape post-war Vietnam. But after a storm and a pirate attack, they’re not sure they’ll ever see shore again. What brings these three sets of siblings together on an adventure of a lifetime is a little magic, helpful sea monsters and that very special portal, A Crack in the Sea.

It’s 1945, and Lorna Anderson’s life on her father’s farm in Scotland consists of endless chores and rationing, knitting Red Cross scarves, and praying for an Allied victory. So when Paul Vogel, a German prisoner of war, is assigned as the new farmhand, Lorna is appalled. How can she possibly work alongside the enemy when her own brothers are risking their lives for their country?

But as Lorna reluctantly spends time with Paul, she feels herself changing. The more she learns about him—from his time in the war to his life back home in Germany—the more she sees the boy behind the soldier. Soon Lorna is battling her own warring heart. Loving Paul could mean losing her family and the life she’s always known. With tensions rising all around them, Lorna must decide how much she’s willing to sacrifice before the end of the war determines their fate. 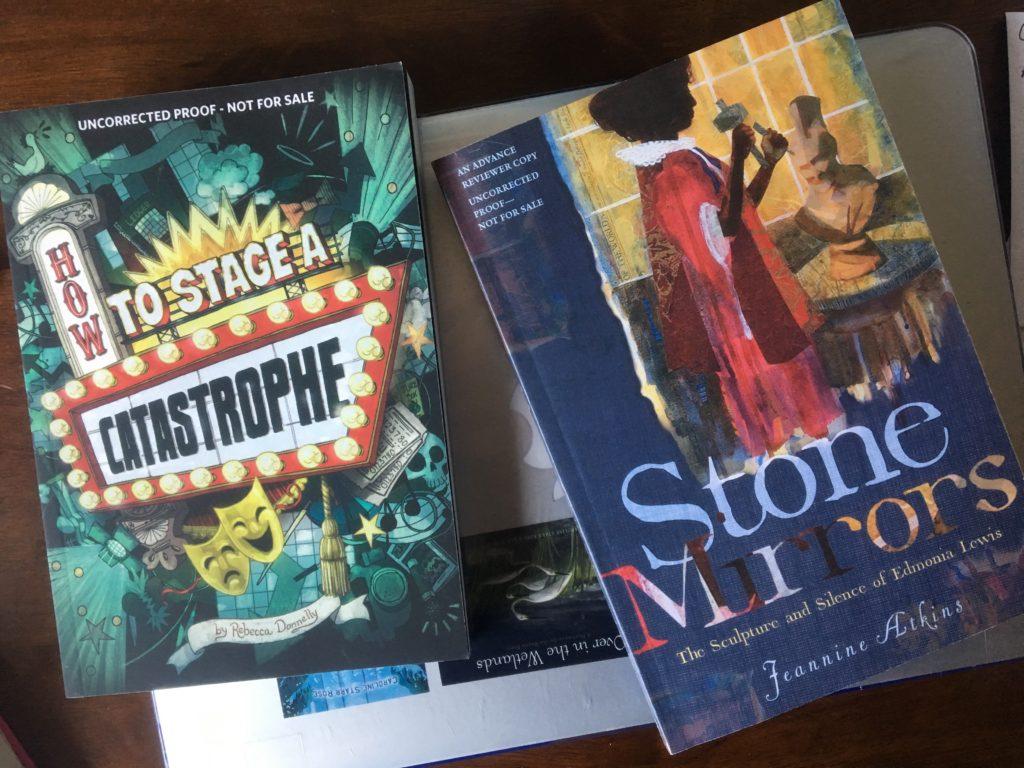 ACT 1: The Juicebox Theater is about ready for the recycling bin.
ACT 2: Sidney and Folly consider a crime. [You have to read it to see if we commit a crime, that’s called suspense.]
ACT 3: Sidney and Folly save the Juicebox Children’s Theater! [It’s not giving anything away to tell you that. We don’t want you to worry.]

Sidney Camazzola plans to be the director of the Juicebox Theater when he grows up. But the theater is in danger of closing, and he and his friends know they need a plan to save it – and fast. Hilarious and heartwarming, the mission to save a failing community theater unites a riotous cast of characters in this offbeat middle-grade novel.

A sculptor of historical figures starts with givens but creates her own vision. Edmonia Lewis was just such a sculptor, but she never spoke or wrote much about her past, and the stories that have come down through time are often vague or contradictory. Some facts are known: Edmonia was the daughter of an Ojibwe woman and an African-Haitian man. She had the rare opportunity to study art at Oberlin, one of the first schools to admit women and people of color, but lost her place after being accused of poisoning and theft, despite being acquitted of both. She moved to Boston and eventually Italy, where she became a successful sculptor.

But the historical record is very thin. The open questions about Edmonia’s life seem ideally suited to verse, a form that is comfortable with mysteries. Inspired by both the facts and the gaps in history, author Jeannine Atkins imagines her way into a vision of what might have been.