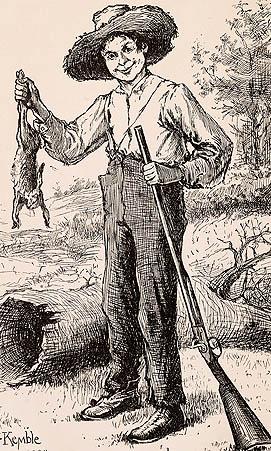 I knew two things about Jasper as I started writing his story back in 2013: His mama had taught him “to scrub like a regular girl” and he’d be based on Mark Twain’s beloved Huckleberry Finn.

It didn’t take much to work a washboard into Jasper’s story, but modeling my boy after America’s most well-known character was a little different. I spent time with Huck, re-reading his Adventures, and pored over Steve Bramucci’s Master of Fine Arts thesis, Huck’s Legacy: The Complex Nature of the Humorous First-Person Storyteller. Steve writes that “Huckster” characters (those who share traits with Twain’s iconic Huck) usually hold these characteristics in common:

This list became my framework as I wrote Jasper’s story. If I’ve done my job right, you’ll find these elements in Jasper’s character. And if I’ve done my job especially well, he’ll feel as familiar as Huck and entirely like his own self — that washboard-using fellow, Jasper Johnson.

I’ve written more about Jasper’s connection to Huck (and my love for Twain’s character) over at the Nerdy Book Club. I’d love to have you join me there!