Classroom Connections is a series meant to introduce teachers to new books.

A Voice for Kanzas – Debra McArthur 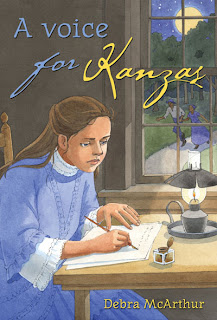 “Authenticity supported by her previous juvenile nonfiction works, McArthur has created a believable and fast-paced tale of life in the Kansas Territory.” – Kirkus Reviews

“Although the book is intended for young readers, it’s not hard to imagine folks of all ages will enjoy the thrilling yet accurate historical events told in ‘A Voice for Kanzas'” – The Landmark Newpaper

Please tell us about your book.
A VOICE FOR KANZAS tells the story of Lucy Catherine Thomkins, a thirteen-year-old poet from Pennsylvania whose father takes the family to Kansas Territory in 1855. Although her father is driven by his desire to vote in the territorial elections and make Kansas a free state, Lucy doesn’t understand the importance of that, and she is miserable in her new home, where they are constantly threatened by Border Ruffians from Missouri who want to ensure that Kansas will become another slave state. When Lucy learns that her best friend’s family is secretly helping slaves escape, she makes a decision that could have dangerous consequences for herself and her family. She struggles to find her place—and her voice—in Kansas.

What inspired you to write this story?
I learned a little about Kansas history and the struggle for statehood when I taught high school in Leavenworth, Kansas. I found the story fascinating, and I thought about how difficult daily life must have been for the early settlers. In 2001, I wrote a nonfiction book about territorial Kansas, and my research rekindled my interest in the era. A few years later, I began to imagine the story from a young girl’s viewpoint, and I decided to use 1855 Lawrence as the setting for a novel.

Could you share with readers how you conducted your research or share a few interesting tidbits you learned while researching?
I knew most of the important events of the period from my previous research on the nonfiction book, but I really needed to know more about the daily life of the people in Lawrence. Through the Kansas State Historical Society I obtained the weekly newspapers from Lawrence in 1855. I found articles about neighbors, church dinners, weddings, funerals, band concerts, and all the wonderful tidbits of small-town life that really bring a place to life. That really helped me build a whole world for Lucy.

One day I ran across the 1855 brochure Information for Kanzas Immigrants published by the New England Emigrant Aid Company. The description of “Kanzas” in the brochure was intended to draw Easterners to the territory, and made it sound much more settled and civilized than it actually was. Many settlers were pretty unhappy when they arrived in the territory and found that it was not at all as it had been advertised. That document led me to the real meaning of the story.

What are some special challenges associated with using a historical setting?
I thought I had a really good handle on the historical details until I began writing. Every day I had new things to learn: What kind of pen would Lucy use? What kind of shoes would she wear? What kinds of things would be in her father’s store? How much would they cost? Each detail I learned led to three more I needed to investigate. I had to do some kind of research every single day as I wrote the first draft.

What topics does your book touch upon that would make it a perfect fit for the classroom?
The Civil War is a major topic of study in schools, but many people don’t know much about the years leading up to the war. In 1855, a newspaper writer predicted “Kansas will probably be the first field of bloody struggle with the slave power,” and he was correct. Few people outside the state know the story of “Bleeding Kansas.” The book gives readers some idea of the working of pre-Civil War politics, the Underground Railroad, early feminism, and the power of the newspaper to influence events. All of these are topics students may wish to explore more through their own study.

Thank you, Debra, for joining us today! You can learn more about Debra and A VOICE FOR KANZAS at her website and blog.