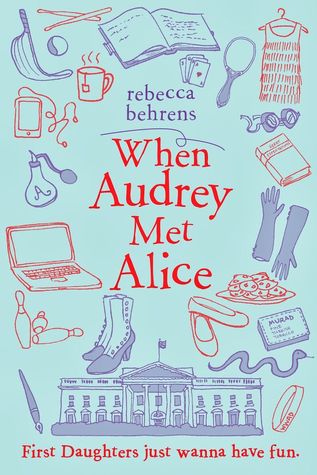 WHEN AUDREY MET ALICE is about what happens when Audrey, a somewhat lonely thirteen-year-old First Daughter, finds Alice Roosevelt’s long-lost diary hidden under the floorboards of a White House closet. After reading about Alice’s wild antics—carrying around a pet snake to parties, going for joyrides in her red runabout, traveling to Cuba, and throwing a huge White House debut—Audrey is inspired to find her own ways to “eat up the world.” But trying to live like Alice threatens to get Audrey into more trouble than she can handle—and may even affect her mother’s political career.

WHEN AUDREY MET ALICE features fictional diary entries from Alice’s point of view, along with an author’s note, bibliography, and many ancillary resources available on the publisher’s website (such as an Educator’s Discussion Guide, Women’s History Month lesson plan, and ALICE FOR REAL, an annotated version of the diary entries).

Growing up, I was fascinated by children living in the White House. I’m still interested today in what private life is like for presidential families. Particularly when President Obama was elected in 2008, I wondered how the lives of his daughters would change as they headed to Washington. I imagined that there would be a lot of wonderful and exciting opportunities for them in the coming years—and probably some hardships, too. The idea of a “First Daughter” feeling a little isolated and constrained stuck with me and soon developed into Audrey’s character.

I also had long wanted to write fiction about Alice Roosevelt’s wild life. Interest in Theodore Roosevelt runs in my family—my great-grandfather was present at the famous speech TR gave in Milwaukee, Wisconsin, after TR had been shot in an assassination attempt. My father is a history buff and told me many stories about the Roosevelt family, and I found Alice particularly fascinating.

Then one day I was walking near 62nd and Madison in New York, and suddenly I had the initial spark to combine those two story ideas into one. Interestingly enough, while researching I found out that Alice’s aunt had lived at that very intersection, and that was a place where Alice had spent time as a young person. Weird!

Much of my research was done the old-fashioned way: heading to the public library and checking out lots and lots of books on Alice Roosevelt and White House life. I also used many online resources, including official White House websites, the White House Historical Association, National Parks Service sites, and unofficial pages that detail White House history.

I also was fortunate enough to be selected to attend a private White House Social garden tour. With about twenty other attendees, I got to tour the grounds and meet with White House employees. It was so helpful to get to see this particular setting in person, and to experience things like the security process for visitors.

While I was writing the first draft, a good friend happened to work in the West Wing. It was great to be able to send someone there an email asking, “What would happen if someone ordered a pizza to Pennsylvania Avenue?” Some of my friend’s responses made me interested in aspects of White House life I wouldn’t have thought of myself, such as food security at the White House.

For me, it was challenging to balance the occasionally competing demands of factual accuracy and good fiction. Especially because I had so much information about Alice’s real life, I felt a bit of a responsibility to respect the facts while writing her diary entries. Sometimes, though, it felt more true for my Alice’s story to stray from what really happened, either because it fit the character I’d created or because it tied the two girls’ stories together more neatly.

Ultimately, I decided that I wanted to write the best piece of fiction possible, so I would have to side with that. Within reason, of course—I worked hard to make my Alice character as believable and true to her time period as possible.

I also think it can be tricky to get period writing for contemporary readers right. I hope Alice’s voice is believable as that of a seventeen-year-old in the early 1900s. I’m sure I’ve included a few anachronistic words here and there, even though I did rely heavily on the online etymology dictionary and other resources to see when terms came into use! But I also wanted her words to flow nicely and stay accessible for young readers today.

Be sure to visit Rebecca Behrens at her website.