** Pre-order giveaway for Jasper and the Riddle of Riley’s Mine! Now through February 6. Click through to learn more. ** 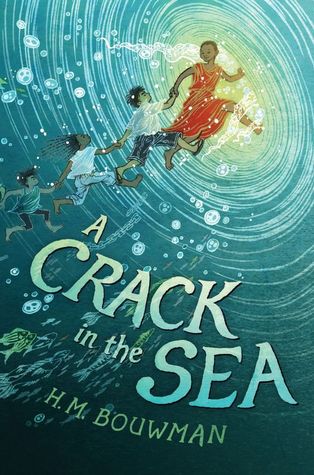 ★ “Through the captivating interwoven tales of these three sibling pairs—and with assistance from Shimizu’s powerful ink illustrations—Bouwman crafts a moving narrative about family, magic, morality, the power of storytelling, and the cyclical nature of history.”—Publishers Weekly, starred review

“This novel touches on sensitive and tragic moments in history and gives them fantastical remediation for a provocative, immersive read.”—Kirkus Reviews

“Fans of Grace Lin will love this wholly original book that reads like a fairy tale. A moving and thought-provoking choice for library collections.”—School Library Journal

When 12-year-old Kinchen and her new friend Caesar decide to uncover the Raft King’s nefarious plan and save Kinchen’s brother, they set in motion a chain of events that will put them in contact with another world and pull in stories from far-away times. A Crack in the Sea follows the fates of twin siblings on a slave ship in 1781; a 12-year-old boy escaping from Vietnam in 1978 shortly after the fall of Saigon; a giant overcrowded Raftworld whose people need to find a land of their own; and sea monsters in love.
Combining real history and deep fantasy, A Crack in the Sea is about how sometimes you have to leave your home–even though you don’t want to–and how you might find or build a new place to call home.

A couple of different things happened at almost the same time. One was that I imagined a giant raftworld, and I wanted to write something with that setting. The other was that I read about the Zong slave ship (a real and horrifying story) and its weight pressed on me. More images and stories and real world events influenced the writing as the manuscript progressed, but I think the book really started with the image of the giant raft and the story of the Zong. And it started with the idea that these two opposite things—one an image of how a people might survive and even thrive, and the other a story of genocide—might somehow inform each other in a novel.

Because there were three different historical periods/events I was researching (the Zong slave ship; the Vietnam war and its aftermath for those who tried to escape; and a third, smaller thing that I won’t go into because it would spoil a surprise in the book), the research progressed differently for all three.

For the Zong, I was limited to scholarly research on the Zong specifically and the Middle Passage more generally, as well as historical documents and (historical) first-person accounts. There wasn’t anyone I could interview, obviously, about their experience on the Zong.

But with the story of Thanh and his family leaving Vietnam, I not only read books and first-person accounts but also interviewed people who had left Vietnam in the late 1970’s, and I asked a couple of expert readers to read my manuscript and give me feedback on Thanh’s story. As an early Americanist, I’m used to book research and digging into scholarly archives; but interviewing and working with living memory is new to me. I was amazed at what a sharp learning curve that was, and I know I still have much more to learn about this kind of research.

With the last historical piece—and I am being really vague here to avoid spoiling a surprise for those who haven’t read the book yet—I gave myself more leeway to consider odd theories and unproven hypotheses, as with this historical event there isn’t full consensus/proof about what happened—at least not as I’m writing this interview. (That may change, as there have been developments in the research in past few years.) I was simply trying to make my version of the story fit with what might be plausible in the real world.

What are some special challenges associated with fictionalizing a true story?

I was (and still am) concerned about the book seeming to make actual, terrible events more “palatable” for readers. There’s a real danger that when we write historical fiction about characters who miraculously escape from the terrible events of the past, we belittle the real and terrible things that happened—we turn those terrible events into a kind of fictional fodder for the amazing life of our protagonist, who has overcome such astounding obstacles.

But at the same time, I think one of the great strengths of fiction—and especially of fantasy—is that it offers readers the opportunity to imagine a world that might be different from what it is now, or a history that might have gone differently than it really did. And I think that potential benefit from fantasy is worth exploring. What if people in power had made different choices? What if things could turn out differently? What kind of world might we as a people create if we choose not to relive our history?

The book includes some discussion of slavery and the Middle Passage; and some discussion of the aftermath of the Vietnam War. More importantly, I think, the story focuses on kids who are forced by various circumstances to leave their original homes and find or create new homes, and it asks readers to think about what it means to be a refugee or a forced immigrant of any kind.

I don’t want to make the book sound too heavy—it’s also a fantasy, and there are a lot of magical elements: flying, walking under water, talking to fish, and so on. And of course, there are sea monsters in love. ☺