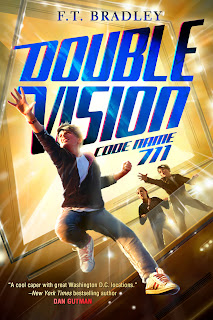 Lincoln Baker is an awesome main character: savvy, funny, and like a young James Bond, he can’t resist the chance to start some trouble. Give him a mystery to solve, stick him in Paris, arm him with gadgets, and watch stuff go boom.
— Jack D. Ferraiolo, Edgar-Award winning author of The Quick Fix

A great voice, with a good heart, some self-awareness, and a funny style.
— The Horn Book

“The story moves quickly with witty prose and enjoyable characters. Linc’s persistence and ability to cause chaos win the day.”
— School Library Journal

Please tell us about your book.
Double Vision: Code Name 711 is the second book in a middle-grade spy trilogy I wrote with reluctant (boy) readers in mind. Main character Linc Baker is a regular kid (and a bit of a troublemaker), but he’s called in for another spy mission.
Super-secret organization Pandora wants Linc to go to Washington, D.C. to protect the first daughter and find George Washington’s legendary coat, rumored to make its wearer invincible. Pandora needs to find it before a deadly CIA mole uses it in a plot against the president.
But Linc’s lookalike agent nemesis Ben is already on the case. With the first daughter’s help, Linc will have to dig into the history of America’s first spies—the Culper Ring—to beat Ben at his own game and stop the mole before it’s too late.
Code Name 711 is all about high-stakes espionage and real American spy history dating back to the Revolutionary War. I’m so excited about this book.
What inspired you to write this story?
For Code Name 711, I started with the Washington D.C. location, which is the center of the spy world—Linc just had to have an adventure there given that this is a kid spy trilogy. Next, I began researching George Washington, since Linc would be on the hunt for a mysterious double of Washington’s coat.
Once I found out George Washington was a spy, the pieces just fell into place. The history of Washington having the code name 711 in the Culper Ring during the Revolutionary War is just so awesome, it fueled Double Vision: Code Name 711from there. You could say that the research kind of drove the story. 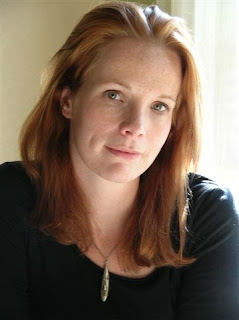 Could you share with readers how you conducted your research or share a few interesting tidbits you learned while researching?
To be honest with you, I wasn’t terribly inspired when I first started researching George Washington. He’s America’s first president, and most of what I knew about him made it hard for me to find something kids could get excited about, or connect to on a more personal level.
But then I found out about the Culper Ring, and how George Washington was the driving force behind this super-secret group of spies. That’s such an exciting bit of history—plus, it made it easy for me to relate George Washington to Linc: they both had to take serious risks, not knowing what the outcome would be. Connecting history to today in a way that is easy to understand for kids is what I love most about writing the Double Vision series.
What are some special challenges associated with writing about a real historical figure?
There’s a certain amount of responsibility that comes with writing about a real-life historical figure like George Washington or Leonardo da Vinci (in the first book). It’s important to get the facts right.
I spent a lot of time researching history, and the setting—Washington, D.C. is almost a character in itself in the book, since Linc visits many important landmarks on his quest. I researched the White House, since Linc visits several times on his mission, I studied presidential history, Mount Vernon…
Only about one percent of all my research makes it into the book. It’s time-consuming but important. And I love getting lost in research… It’s a good thing I have deadlines, or I’d probably spend all day at the library.
What topics does your book touch upon that would make it a perfect fit for the classroom?
The Double Vision series is great for reluctant readers, so it’ll keep even struggling readers engaged. I hope this other, top-secret side of George Washington brings new excitement to Revolutionary War curriculum when a class reads Code Name 711.
There’s also opportunity for class discussion when it comes to Linc’s choices in the book. Although he gets into trouble a lot and does things that may not be the best idea, he always does the right thing, even when that’s not the easy choice. Looking at George Washington’s bravery, especially as a Culper Ring spy, he often had to make decisions following his moral compass, just like Linc.
Connecting history to today this way—that’s inspiring to me. I hope it does the same for kids and teachers.
I’m available for Skype visits through Skype in the Classroom, and would be more than happy to talk to kids about the book, the history behind George Washington, and how I write.
Giveaway: 2 books!
Harper Children’s is offering a copy of Double Vision and Code Name 711 to give away. To enter, leave a comment below, mentioning something you learned from this interview. The winner will be randomly selected October 31. US residents only, please.

Update: Congrats to Jill and Faith, our winners!