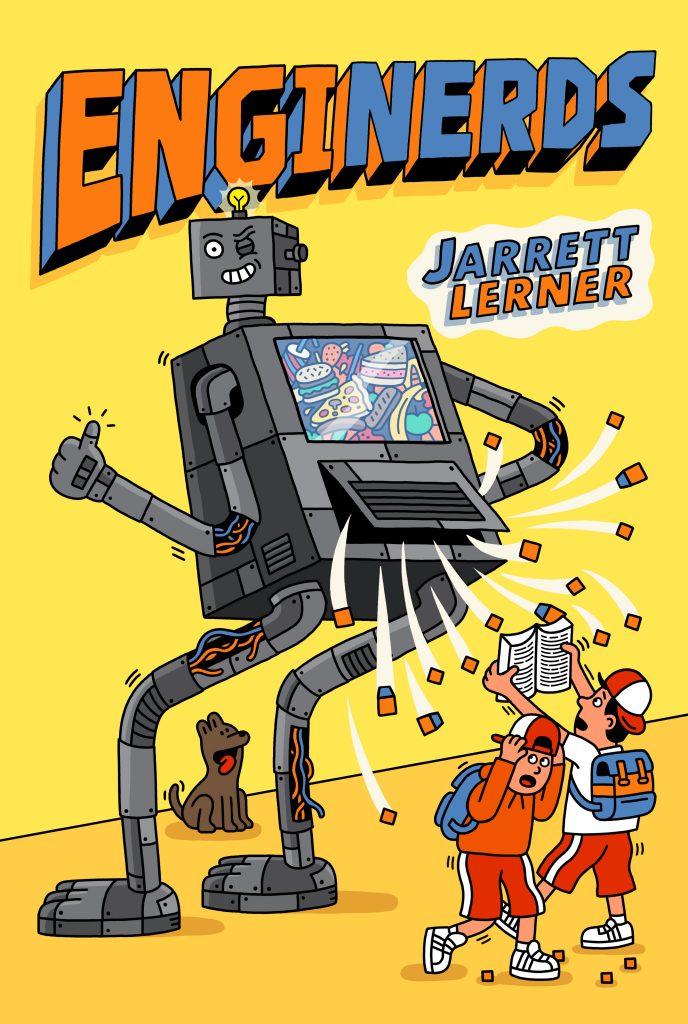 [A] strong entry into the growing genre of STEM adventures hits some of the hallmarks — like robots and DIY problem-solving skills — but adds a welcome dose of emotional authenticity . . . Readers may be drawn in by rogue robots and plentiful potty humor, but they’ll stay for the well-developed story and perceptive portrayal of kids whose passions aren’t always understood, even by their closest friends. — Common Sense Media (5-star review)

EngiNerds is about a group of crafty, clever, creative kids – tinkerers, as I like to call them – who have to save their town (and quite possibly their state, and maybe even a large chunk of their country) from a horde of endlessly hungry, dangerously flatulent robots. As you can no doubt tell, it’s a rather solemn and gloomy tale.

But seriously: in addition to entertaining kids, I hope the book inspires them to be curious about the world around them and the objects that make it up, to be creative problem solvers, and to be the kind of people that everyone would want standing alongside them should they have to battle a horde of endlessly hungry, dangerously flatulent robots.

One of my missions as an author is to reach the so-called “striving” or “undiscovered” reader – the kid who hasn’t yet experienced the thrill of an awesome book. EngiNerds came from a desire to write the sort of fast, fun, and funny novel that might just hook that kid, that might help them take a step toward becoming an active, avid reader. When doing such writing, I often consult the 10-year-old Jarrett still living inside me. He’s great at keeping me on track.

Did you do any research before writing or while working on the book?

I did ZERO research before writing this book (unless you count all the reading of humorous Middle Grade adventure stories I was doing at the time). Interestingly, though, I’ve done a lot of research since the book came out. Most of that research has been about robots and robotics.

For instance: the robots in my book are capable of building themselves. I made this the case because I wanted the bots to be both cool and creepy at the same time. But I also thought the idea of robot building itself was super far-fetched. WRONG. It turns out there are robots who are not only capable of building themselves, but are capable of rebuilding themselves should they sustain damage (talk about creepy…). Such bots are considered extremely cutting edge, and much of the work being done in this “subfield” of robotics is happening in Cambridge and Boston – which is where I live (also kinda creepy…).

After getting loads of robot-related questions during school visits and events, I decided to educate myself as much as I could so that I could actually give kids some decent answers!

What are some special challenges associated with writing humor?

The biggest challenge, I think, is voice. So much work goes into getting a voice “right,” but two of the most important considerations for me are word choice and rhythm. Sometimes, the addition or removal a single syllable can make or break a sentence, and determine whether or not a joke “lands.” And, of course, some words are just funnier than others. Finagle, for instance. The word alone makes me giggle.

A lot of educators have used the book as a tie-in to STEAM curriculum. The EngiNerds, as I said before, are tinkerers. They use chopsticks and rubber bands to build catapults that end up saving their town (and quite possibly their state, and maybe even a large chunk of their country). I often show up to school visits with a bag full of random objects gathered from my recycling bin and junk drawer. I invite kids to repurpose the objects and see what they can make, and challenge them to use the same set of materials to create several different “inventions.”

The book also raises a number of questions that make for good classroom discussion – and not just “What would you do if walking, talking, butt-blasting bots overran your town?” Many of these questions relate to friendship, and the particularly tricky dynamics of large friend groups. For instance: “Is it possible to have multiple best friends?” “What should you do if your friend befriends someone you dislike?” “To what extent, if any, are you responsible for your friends’ problems?” I think the silliness of the book’s plot can actually help certain kids feel more comfortable discussing such topics and sharing their thoughts in a classroom setting. It can be easier, sometimes, to discuss tough issues when they’re framed with humor.

EngiNerds can also be used as a launch pad for all sorts of creative, hands-on activities, from building catapults to designing your very own robots. I’ve got some suggested discussion questions and activities at my website, here.