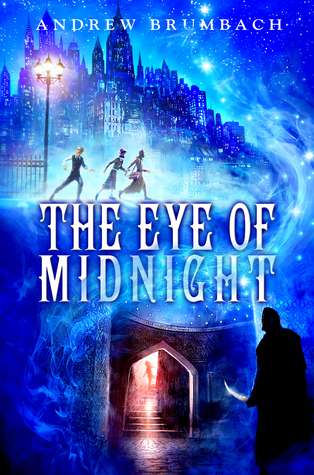 Combining a 1920s New York setting with ancient Turkish and Arabian folklore and history, this novel reads like a young Indiana Jones adventure. . . . As smart as it is action-packed.
—The Bulletin of the Center for Children’s Books

The Eye of Midnight is an adventure story in the vein of books like Treasure Island, King Solomon’s Mines, and The Lost World.  To my way of thinking, classic adventure stories like these usually have a few things in common.  The good guys are daring and true and the bad guys need to twirl their moustaches a little bit.  There’s always plenty of action and mystery, along with exotic characters and locales outside the reader’s normal experience, and the style often has a pleasantly stuffy, British ring to it.  My aim with The Eye of Midnight was to capture the essence and appeal of the genre, but also to present it in a way that would be interesting to modern readers.

As far as the particulars, The Eye of Midnight  is the story of a pair of young cousins who meet for the first time in the summer of 1929 at their grandfather’s mansion on the New Jersey shore.  William and Maxine have never had much connection with Grandpa Battersea before, and the more they learn about the retired colonel’s mysterious past, the more curious they find him.  When a cryptic telegram arrives at the mansion, Grandpa whisks the cousins off on a midnight mission to collect a package somewhere in New York City.  But on the way, the old man is kidnapped and Maxine and William find themselves all alone on dark streets haunted by gangsters, and swindlers, and a desperate cult of ruthless assassins who seem to have leapt straight from the pages of The Arabian Nights.  Their only hope of rescuing Grandpa and escaping the city alive lies with a young Turkish girl named Nura and the package that was stolen from her, which contains an ancient relic called the Eye of Midnight.

Several years ago I read an article about the Hashashin, a cult of desert assassins in the service of a charismatic and cold-blooded leader who went by the title of The Old Man of the Mountain.  This group really existed about a thousand years ago, hiding out in a secret fortress somewhere in the Turkish desert.  When I read the legends of the Hashashin, I immediately had the urge to transplant these exotic characters into the more modern, urban context of 1920’s New York City.

One thing I’ve learned is that researching a novel can be addictive.  You pull on one thread and several more unravel, and you end up following them too.  With this book I found myself delving into the details of the roaring twenties, and the exploits of several old-time adventurers, and the architecture of New York’s Old Penn Station.  And of course I spent some long hours sifting through the history of the Hashashin, which is so littered with fabrications and exaggerations that at times it seemed impossible to separate the fact from the fiction.

For starters, some elements of the source material weren’t all that kid-appropriate, so I had to think carefully about how to present them.  There was always the challenge of making the cult of the Hashashin menacing and horrible but in a PG sort of a way.  Beyond that, I had great fun painting a picture of 1920s New York City, but I had to wrestle with how to capture the spirit and texture of that time without bogging the story down in a glut of details.  Hopefully, the energy of the new century and the glamor of metropolis come through clearly on the page without distracting from William and Maxine’s adventures.

The Eye of Midnight should appeal to bright middle grade readers.  It brings a literary quality and an evocative vocabulary, and the story touches on several important human themes like courage, cultural differences, family, and regret.  On a more academic level, the book is set against the historical backdrop of the 1920s, creating an opportunity for further discussion about an interesting chapter of the American narrative.  The publisher has included a glossary at the back which kids will find helpful and kind of fun, and there’s an author’s note which addresses the historical and cultural contexts of the story.  My hope is that The Eye of Midnight will prove to be a gateway hug for young readers to some great works within the canon of classic adventure literature.