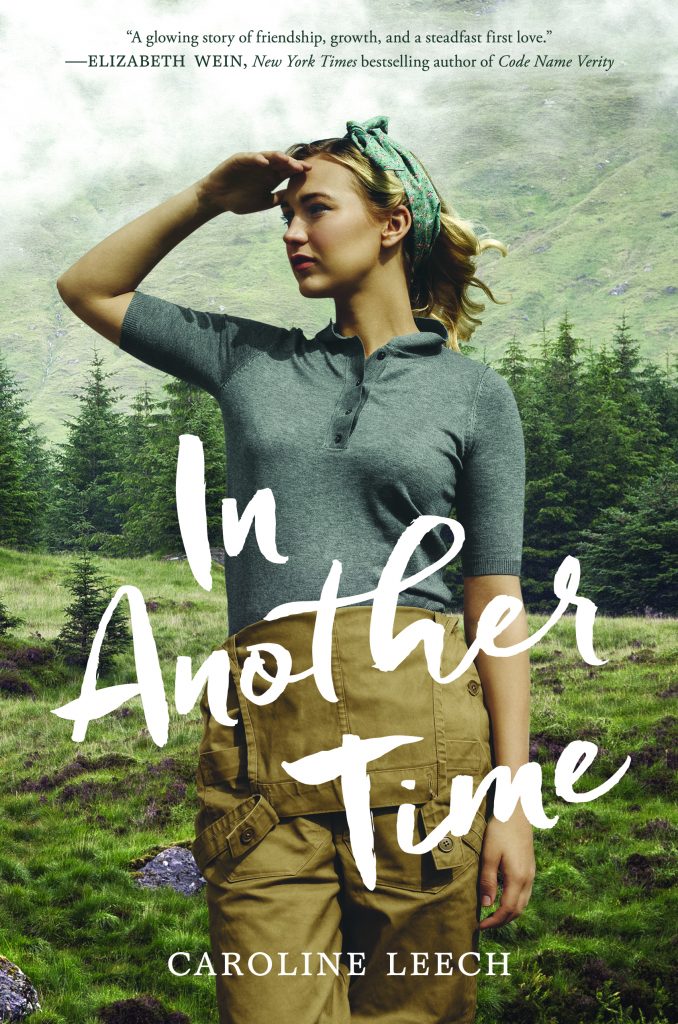 A glowing story of friendship, growth, and a steadfast first love, as teenage Maisie negotiates the forests of the heart and of World War II Scotland with equal determination. An inspiring tribute to thousands of ordinary women who became extraordinary heroes.
– Elizabeth Wein, New York Times bestselling author of Code Name Verity

Caroline Leech brings to vivid life the green Scottish Highlands in this touching wartime historical romance. In Another Time enthralls with strong and compassionate characters. Maisie McCall is the heroine we all need!
– Jessica Brockmole, internationally bestselling author of Letters from Skye

Caroline Leech’s story shines a beautifully written light on the precarious nature of love and war and asks its readers to believe, even when the hero doesn’t, that love can prevail. This is a book that makes you want to curl up with a cuppa and read straight through till the morning.
— Kathi Appelt, National Book Award Finalist and Newbery Honor Winner

IN ANOTHER TIME is set in Scotland during World War Two, just like my debut novel, WAIT FOR ME. It follows a girl who is breaking away from her family to find her independence and discover her place in a world at war. Maisie McCall is 17 and joins the Women’s Timber Corps. Known as lumberjills, these women took over the demanding work of producing timber from the ancient forests of Scotland after the men were called up to fight. The lumberjills were extraordinarily courageous, many of them coming from city jobs as secretaries and shop girls—or in Maisie’s case, straight from school—to take on heavy physical work in the woods with axes, saws and chains. They worked with carthorses to drag huge tree trunks off the hills, drove logging trucks to nearby rail depots, and “manned” the machinery in the sawmills. They often endured dreadful weather conditions—this was Scotland, after all—and they slept in rudimentary log huts, where in winter they sometimes woke up to find a blanket of ice covering their beds. Even though the work was tough and the conditions hard, however, the lumberjills kept each other going, and their contribution to the war effort should not be underestimated.

Many of the friendships which developed between lumberjills lasted for the rest of their lives, and I could easily have written a whole book just about the them. But since I write love stories, my story tingles really began when my research turned up that the many of the lumberjills in the Scottish Highlands worked alongside lumberjacks from Newfoundland and that many marriages resulted. That was when my characters started to talk to me. John Lindsay is the lumberjack Maisie gets to know best, but no matter how close she gets to him, she’s sure that there’s even more that he’s hiding from her. While Maisie tries to find out more about John, she discovers more about herself than she could ever have imagined.

I’d had no idea that the lumberjills of Women’s Timber Corps existed until I was looking for ideas for my second book and an author friend sent me a link to a newspaper article about them. It was as if she had handed me my second heroine on a plate, because once I googled ‘WW2 lumberjills’, Maisie almost jumped out of my screen fully-formed, in her heavy leather boots and carrying her 6lb axe on her shoulder.

I also knew that I wanted to write something quite different from my debut novel, WAIT FOR ME, though still setting it in the same country and time period. That book was about a teenage girl, waiting safely at home for her brothers to come back from war, when a German prisoner arrives at her farm to work. Suddenly, her comfortable life feels suffocating, and she has to fight against the judgment of the neighborhood to make it feel like home again. IN ANOTHER TIME, however, is very different. This one is about a girl who knows her happiness depends on her getting out into the world, away from her family, to show herself that she is capable of so much more than they think she is. She must push to the extremes of her courage and resilience by taking on every challenge which comes her way, fueled by her determination to prove herself in the face of the doubts of other people.

I was very lucky with my research on several counts. Firstly, a childhood friend of mine has been a forester in the Scottish mountains for a long time, so I knew that I had a reliable source of sensible answers to stupid questions.

Secondly, I found two books which chronicled the lumberjills’ experiences. One was Timber!, an anthology of memories collected from dozens of Scottish lumberjills by the late Affleck Gray, who had been in charge of the Women’s Timber Corps’ work in the Speyside area of the Highlands. Their stories were full of the most delightful tidbits of the lumberjills’ daily life, from the lack of toilets, the lack of heating, the lack of entertainment and well, the lack of everything, except for a seemingly endless supply of cups of strong tea. The other book I studied was Voices of the Forests, a newly-published history of forestry in Scotland by an academic, Mairi Stewart, which not only included great information about both the Women’s Timber Corps and the Newfoundland Overseas Forestry Unit, but set it within the wider context of timber production and the wider countryside industries in the 20th century.

Finally, I was so honored to meet a real-life lumberjill. Christina Edgar joined the WTC in 1942, just like Maisie, leaving her comfortable home and her work as an office clerk in Glasgow. Christina is now 95, but still full of memories of her life as a lumberjill. She and I spent a long time chatting over the obligatory cup of tea, and we even sat together at the feet of the Women’s Timber Corps memorial statue which overlooks the forested hillsides near Aberfoyle. The lumberjill memorial was finally erected in 2007, following a long campaign to honor the contribution to the Allied war effort made by these courageous and hard-working women. I’ll admit, being able to sit at the bronze lumberjill’s feet with Christina brought me to tears. Within only a few years, we will lose our chance to talk to, and learn from, those to fought and served in World War Two, and so I hope IN ANOTHER TIME will serve to let the living lumberjills like Christina know that their amazing contribution has not been forgotten.

What are some special challenges associated with fictionalizing a true story

I was lucky to be able to access so many detailed WTC memories because they had already been collected and published. But sometimes it felt that I almost had too much. Early on I decided that I would try to pull all the most interesting bits from lots of girls, rather than follow the story of one of them. But bringing all those stories together to become part of a fictional character’s life does have its challenges, not least because I had to make sure that whatever she did, and whatever emotional reaction she had, felt real to Maisie. Maisie was braver and hardier than some of the real lumberjills I read about, but she was also less foolhardy and reckless than others, and I think that perhaps in the first draft, Maisie was in maelstrom of emotions for most of the book. But by the time I was on my fourth round of revisions, I had really got to know her much better—and John Lindsay too—and I felt sure that I knew the paths they each chose to take were truthful to the people they were, rather than being a jumble of stories borrowed from real life memoirs.

Above all, I wanted to tell an exciting and romantic story, and to pay tribute to the lumberjills of the Women’s Timber Corps, and also to the men of the Newfoundland Overseas Forestry Unit. I hope I have managed to do that in IN ANOTHER TIME.

In my view, one of the most important things which historical fiction can do is tell the stories behind the history text books—the dry names and dates force-fed to students by the curriculum planners—particularly since novels are very often the only places you can find the story of the women. So much of the formal history of our world focuses on wars and governments, a history that is almost exclusively about the men. Frustratingly, telling the stories of the contributions made by women is often left to fiction writers like me. Even though my book doesn’t tell the ‘true story’ of a real lumberjill, it is still true. All the places in my book were part of the real lumberjills’ history, all my dates are accurate (I hope!), and I distilled all my real-life research into this story which celebrates the power and courage of women, of their independence and of their contribution to the war effort. Those are the historical stories that can stay with you for years, when you’ve long forgotten the names and dates which vanished from your mind as soon as the pop quiz was over.