Last summer at SCBWI‘s national conference, I struck up a conversation with another attendee while standing in a winding sandwich line. It was absolutely my pleasure to befriend a fellow former teacher turned author, someone who also writes historical fiction and picture books and has even tried her hand at verse. That night I bought a copy of Glenda Armand’s Love Twelve Miles Long This poignant story, based on Frederick Douglass’s childhood, tells how his mother, a slave, would walk twelve miles at night for a brief visit with her son. Soothing text describes how she overcomes the monotony and loneliness through songs (joyful and sad), the solace of prayer, and love. Emotional paintings capture moods, especially the joy of reunion that wipes away weariness. — Horn Book

Starting with the boy’s elemental question, “Mama, why can’t I live with you?,” the words and pictures tell the family separation story in all its heartbreak and hope. — Booklist

Share this with young readers as a series of homilies on dreams and a family love strong enough to overcome any adversity. — Kirkus Reviews 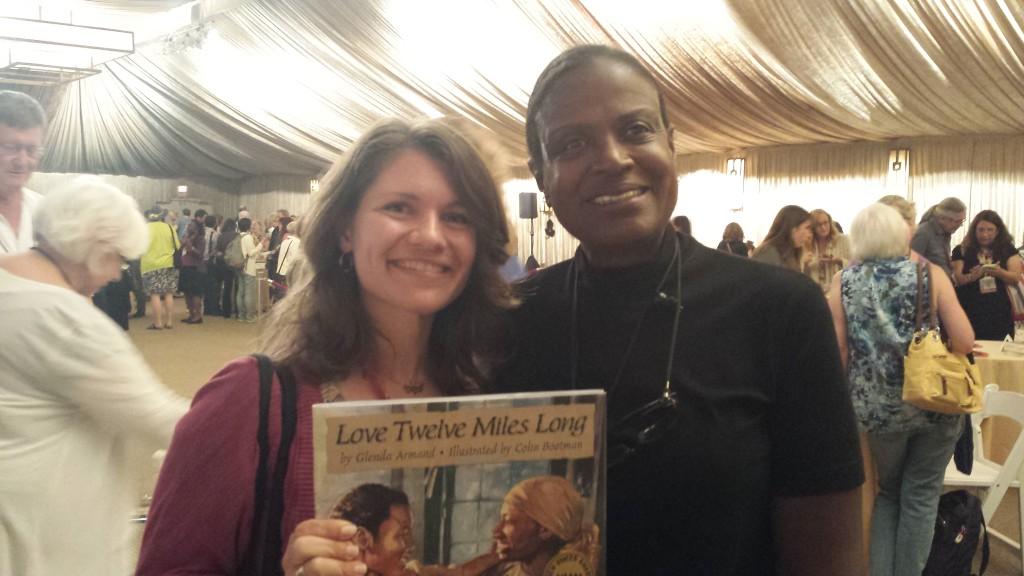 Frederick Douglass was born a slave, escaped and went on to become a great orator and writer who championed the cause of freedom for his fellow African Americans. In his autobiography, Douglass showed the cruelty of slavery from his unique perspective as a former slave. It is a testament to Douglass’s remarkable life that President Abraham Lincoln called this former slave, “my friend Douglass.”

Love Twelve Miles Long takes place long before Frederick Douglass has become famous and successful. The setting is a farmhouse kitchen on a Maryland farm. It is evening and 5-year-old Frederick’s mother, Harriet, a slave who lives on different farm on their master’s plantation, has come to visit. The story allows the reader to peak in on mother and son as they share a few precious moments.

When I read his autobiography, I was struck by Frederick Douglass’s strong feelings for his mother despite his having spent so little time with her. In fact, he only remembered seeing his mother at night on the few occasions that she was able to walk the twelve miles to spend time with her son. I believed that there was a story in those visits that spoke to the universal bond between mother and child.

I read Frederick Douglass’s autobiography while preparing to teach eighth grade US history after many years of teaching in the elementary grades. The passage in which Douglass mentions his mother’s night time visits touched my heart. I could just imagine the love it took for her to walk twelve miles (one way!) to spend time with her son, who lived with the cook who served as babysitter for the slave children who were too young to work.

After reading his other autobiography written later in life, I came up with the way I would tell the story of Frederick and his mother.

I decided to envision Harriet and Frederick in their master’s kitchen, the place where the visits occurred. Then, with pen in hand (literally), I “listened” in on their conversation. There were times when I felt that Harriet was guiding my pen as I wrote. For instance, at one point Frederick asks, “Why did God make us slaves?” After writing the question, I crossed it out because I really didn’t have an answer. But then I heard Harriet’ voice saying, “Let him ask the question.” So I did.

I love the challenge of writing historical fiction. I like taking events that I know happened to real people (like the visits Harriet paid to Frederick) and imagining things that could have happened (their conversation) and mixing them together to make a story. To me, this makes historical figures interesting, accessible and human.

My books are introductions to real events and people that I hope invite the reader to find out more about the subjects.

Love Twelve Miles Long lends itself to many classroom discussions/topics: