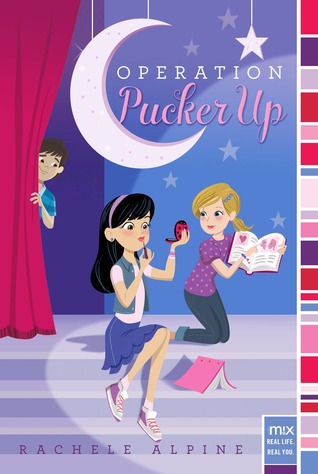 Operation Pucker Up is about a girl named Grace Shaw who is thrilled when she’s cast as Snow White in her middle school play. That is, until she realizes she’ll have to kiss Prince Charming. And not only is Prince Charming—a.k.a James Lowe—the most popular boy in school, but Grace has never, ever been kissed.  To help, Grace’s two best friends create Operation Pucker Up—a plan for Grace to score a kiss before opening night so she doesn’t make a total fool of herself in front of a live audience. If that weren’t enough to think about, Grace’s father, who left six months ago, suddenly walks back into her life. Grace, her mom and sister have bonded as the “Terrific Three” – and while two of the “Three” welcome Dad back with open arms, Grace isn’t sure she can forgive and forget. As Operation Pucker Up begins to spin out of control, and opening night is approaching, the question is whether Grace will manage to get her happily ever after—both on-stage and off.

I did theater and dance classes at a place called The Beck Center for the Arts when I was young all the way into high school.  I called it my home away from home, because sometimes I was there more than I was at my real house!  I was in a lot of shows while I was there, including Cinderella, where I had to dance with a boy.  I remember being so nervous about it because I had never held hands with a boy before. I couldn’t imagine ever having to kiss someone on stage!  I began to brainstorm about that idea and what would happen if that kiss was your first kiss.  Operation Pucker Up was born from that!

Could you share with readers some behind-the-scenes glimpses into your book?

When I was writing this book, I wanted it to be a sort of homage to The Beck Center for the Arts.  Almost ever character is named after someone I acted with (either their first or last name). There are many local places mentioned in the story and one of the main character is even named Beck!  I wanted readers from Cleveland who knew the theater to pick up the book and feel connected to the story through the setting.  The coolest part was that they hosted my launch party in their studio theater!  We filled all 98 seats and had almost fifty more people standing and sitting in the aisles.  Some of my old friends came and acted out a scene from the book and a few of my old directors/teachers were there.  It was so amazing to celebrate my book in the location that inspired it.

What are some special challenges associated with writing middle grade?

I wanted to write a book that was both light hearted and serious, because I think that’s what life for a middle-schooler is like. They are trying to find where they fit within the world, their friends, and family, some of which is in their control and some of which they have no say in. I wanted to find a good balance between the two and make it sound authentic. Grace is trying to handle having her first kiss on stage and the return of her father after her parents’ separation.  Both of these events would be a big deal to a middle-schooler, so I wanted to make sure I treated both as such.

The book includes a lot of topics for discussion such as being yourself vs. trying to be someone you aren’t, forgiveness, bullying, feeling like you don’t belong, the power of friendship, telling the truth instead of keeping your feelings inside, and what family means.