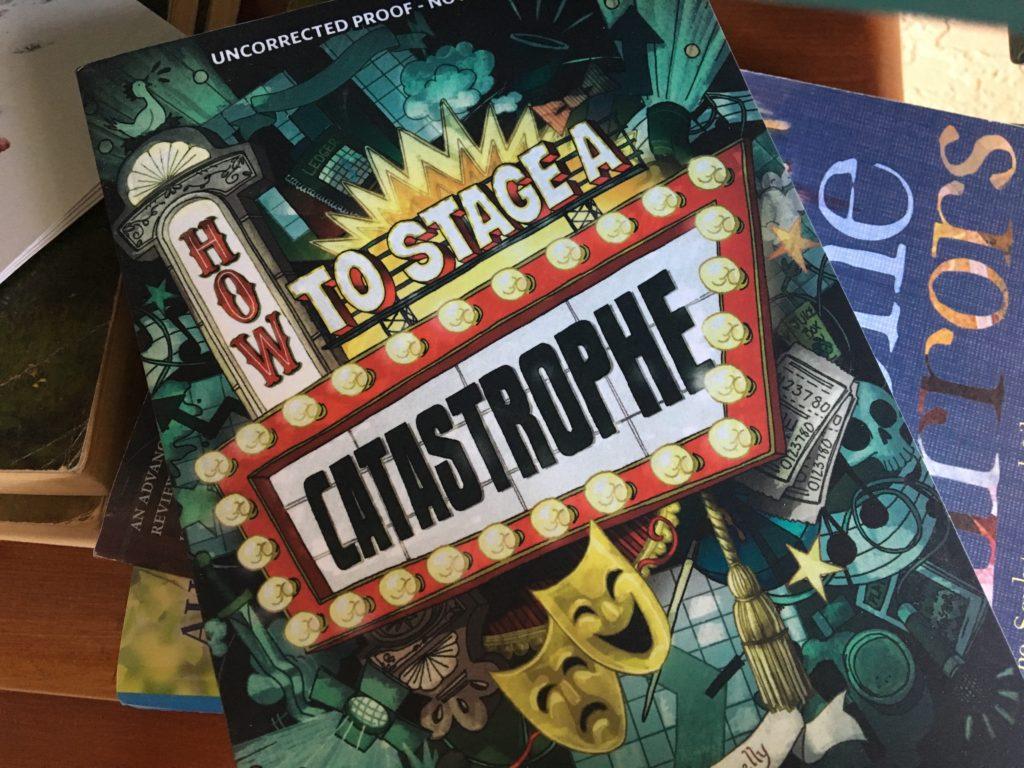 Praise for How to Stage a Catastrophe

HOW TO STAGE A CATASTROPHE is a contemporary middle grade story narrated by Sid (Sidney Horatio Camazzola, when he’s feeling professional). Sid’s greatest love is the theater, but he doesn’t want to act: he’s born to direct. The Juicebox Theater–Hatahatchee, Florida’s one and only home for theatrical kids–is going to run out of money soon if he and the other Juiceboxers can’t come up with enough money to keep the lights on. When their Variety Show and Amateur Night don’t go as planned, the group has to come up with another idea. Luckily for them, Sid and his best friend Folly have discovered a secret about someone close to the theater that might just help the cause, if they can set the stage so everything goes off perfectly. Everyone has something to contribute to the final act—and it’s not a spoiler to say they do save the theater. Sid tells you that right away, in fact, because he doesn’t want anyone to worry.

I wasn’t a big drama geek in school. I set this story in a children’s community theater because that was my one and only theatrical home in middle school. I did a few plays and really enjoyed it, but more than being on stage, I think I loved the feeling of being part of a group whose entire goal was to tell a story to a bunch of strangers. So I wanted to write about a kid who loves a community theater, not a fancy place, just a small, low-budget theater that he and his friends fill with their imaginations. I’m also a huge fan of stories where kids come up with complicated schemes that they’re able to pull off (like the Jackson Greene books by Varian Johnson). One of my other inspirations was watching the movie THE STING for the first time when I was starting this book, around 2011.

I knew this book wasn’t going to get into much of the technical stuff about the theater (and true theater folks out there might be agreeing with me that it doesn’t!), but I couldn’t coast along on what I remembered about the theater from sixth grade. So I looked up some technical things about lighting and theater games to play with kids and that sort of thing. My favorite part, though, was some in-person research I did in your lovely city of Albuquerque when I was living there.

Our lovely city! You’ll always have an Albuquerque connection.

One of the characters, Jelly Baby, comes to spend the summer with her cousin, Ruben, the Juicebox’s director. At home in Miami, she’s a puppeteer, and she’s quite talented. But her signature puppet isn’t a marionette or a hand puppet or any of the typical things you think of when you think of puppetry. It’s a life-sized puppet she wears over her head and controls from the inside with a series of rods. I got the idea after visiting Loren Kahn and Isabelle Kessler of the Loren Kahn Puppet and Object Theater in Albuquerque. They were kind enough to feed me tea and show me their amazing warehouse and some old books of puppetry. In one of those books was an illustration of a guy wearing an animal puppet over his head, and the image really stuck with me. I thought, what if a girl was operating this type of puppet, but instead being a rough-looking animal, it was an older woman, a storyteller? In the world of puppetry, puppets take on a life of their own, and that’s something I wanted to explore a little.

What are some special challenges associated with telling a story in prose when the narrator so clearly wishes he were directing a play instead?

Although the book is about the theater, I didn’t want to write the whole thing as a script. A lot of the energy in the story comes from Sid’s narrative voice, which addresses the reader directly sometimes, almost as if he were describing how would direct this, if it were a play. There are a few times when it gets a little closer to an actual play, including one short melodrama in which all the theater’s problems are solved with wishful thinking, and a lot of moments when Sid says something like, “If I was directing this play…”

It was my editor’s idea (thanks, Eliza Leahy!) to split the story into Part One and Part Two, where Part Two has Sid starting all over again with counting his acts and scenes as the kids prepare for the final act where they’ll confront their stage villain and make him pay up. Originally, the split was less clear. Also, it was a lot of fun to throw little things in there like the cast list, an intermission, and a couple of lighting cues. Any time you’re using a conceit like that, though, you have to be careful not to let your fun overwhelm the narrative. You don’t want to be clever at the expense of the story.

This would be a fun book to use in a discussion of different types of writing and storytelling, since there is a short section in script format, and it lends itself to projects about the theater. Capstone is developing an activity kit that will include a template for a paper theater and some finger puppets!

The plot to save the theater from financial ruin also makes a fun jumping-off point for projects about fundraising, small businesses, local economics, and that sort of thing. I would love to see a class doing projects on fundraising ideas for worthy causes.

Rebecca is offering one advance reader copy of How to Stage a Catastrophe. Enter below! US residents only.