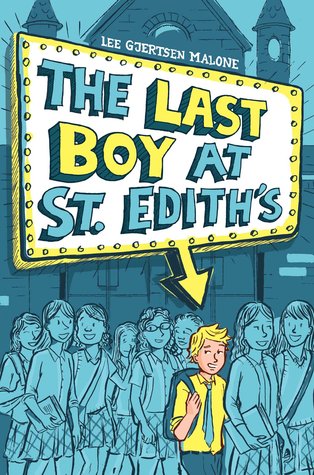 The Last Boy at St. Edith’s

This is a funny, emotional book that will quickly become a favorite to many a reader, regardless of age. Sweet, funny, exciting—a spectacular debut. — Kirkus, starred review

Malone’s debut is a sweet, candid novel about fitting in, messing up, and making amends. — Publisher’s Weekly

It’s the story of a boy named Jeremy who goes to an all girl’s school that tried to go coed but failed. He ends up being the very last boy left at the school, because his mother works there and won’t let him transfer, so he hatches a plan with his best friend to pull some epic pranks in an effort to get himself expelled.

It began with a conversation with my husband. He went to an all-boy’s school that went coed a few years after he graduated, and we got a fundraising newsletter from his alma mater. As a graduate of public schools, I was fascinated with the whole idea – why a previously single gender school would decide to go coed, and, because this is where my mind goes, how would they know it would work? And what would happen if it didn’t work, and instead of there being more and more kids of your gender each year, there were fewer and fewer?

And the same time I was also thinking I wanted to write a book about a strong boy-girl friendship that was tested by growing up, and the combination of those two ideas got me started writing this book.

I love doing research, even if it’s not obvious in the finished book. I love it almost too much. For this book I researched a lot of things – saint names, the economic development of western Massachusetts, and how doorknobs are put together. Oh, and pranks. Lots and lots of pranks.

What are some special challenges associated with writing middle grade?

First, I think that while it’s true that in any novel every scene has to have a purpose, in middle grade I think it’s even more important – because of the space constraints, every scene needs to do double and triple duty. There’s also the tricky issue of the middle grade voice. It’s not easy to find that balance where your kids sound like kids and the story feels like something they would be interested in without becoming a parody of the way kids talk.

Secondly, Jeremy, the main character, is a lot of ways a cultural norm in our society. He’s white, male, middle class. He wouldn’t stand out at all in a lot of places. But he definitely does stand out at St. Edith’s. Which leads to the question, what makes something a norm anyway? How can you decide what’s normal without considering the context?

And finally, the main characters make some really bad decisions in the book that seem like good ideas at first. They never intend to hurt anyone with their pranks but they end up causing a lot more trouble than they expected. I think it’s interesting to think about what you should do when something you never intended to cause people trouble backfires.

What do you think of the blog? I’d love to hear from you.
Click through to sign up for my quarterly newsletter and you’ll receive a free printable from my novel, Blue Birds. Enjoy!