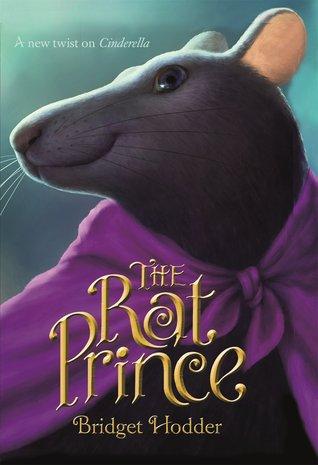 THE RAT PRINCE is a re-imagining of the tale of Cinderella.

Prince Char, the Prince of the Rats of the Northern Realm, is dashing, cunning, and loyal to a fault. He and his rat-subjects help keep Cinderella alive when her stepmother would gladly see the girl starve. But then Char gives Cinderella an ancient ring that his rat-ancestors stole from her noble family long ago…setting off a series of unexpected magical events! On the night of the big ball, the fairy goddess turns Char into Cinderella’s coachman. Now he and Cinderella have one fateful night to save both her family and the kingdom…and to find a most unexpected happy ending!

I was never satisfied with the traditional tale of Cinderella. It’s billed as a romance but it isn’t romantic. It features an unheroic heroine who’s strangely passive and sad. And in general, it simply doesn’t make much sense! Why did Cinderella’s father allow her to be treated so horribly by his new wife? Why did a handsome prince need a ball with every lady in the land in attendance to find a wife? Who on earth was the Fairy Godmother, and how did Cinderella get one? (And where can the rest of us get one?)  These questions, and more, sparked my creativity.

I had a lot of fun researching the world of rats! I used to fear them, but now I respect and admire them. (I guess I still wouldn’t want to meet them in a dark alley, though.)

Among the cool things I learned (or maybe it’s unsettling, depending on your point of view) is that big rats can squeeze into a tiny opening that’s only the size of a quarter. So you might want to check your basement.

In addition, I had to learn more about olde-time sewers and plumbing than you might think, in order to get the rats in the story from place to place. In 18th-century Europe, there were (rarely) some hollowed-out tree trunks used as waste pipes, so I used these to connect Lancastyr Manor with the sewers that led to the royal palace in my story.

What are some special challenges associated with fairy tale retellings?

When you take on a fairy tale, you’re tinkering with something people have loved for centuries. So you have to be very careful to make every change a rational one within the fairytale world you create.

I chose to respect the framework of the Cinderella story in general, and tell it in a way that finally made sense and felt right to me, rather than simply turning it upside down in a haphazard manner, just for the shock effect.

But even when you’ve made the new version of the tale consistent (as well as exciting and satisfying), there are readers who simply can’t accept alterations of their beloved original story. Once, at an author appearance, I encountered an older reader of my book who was very distraught at a change I made in the role of the human prince. I could not console her!

One of the original taglines for my book was “Heroes come in many guises.” This referred to the Rat Prince and to Cinderella, as well as the characters of Jessamyn the stepsister, Truffle the rat, Pye the scullery boy, and others. Often, the ideas and actions that save the day in a crisis come from folks who think differently from others; who might not conform to the prevailing sense of what is typical; who may be even be marginalized and pre-judged. THE RAT PRINCE is a great springboard for class discussions about how we shouldn’t pre-judge others on the basis of their appearance, background, social class, gender, and many other factors. It should also inspire us to find our own voices and value what we each bring to the table.

Empowerment of young women, choices and consent are also themes I wove throughout the story, hoping to spark conversations that are long overdue when it comes to the Cinderella mythos.

Not every lesson needs to feel like one. Sometimes it’s better to pick up incidental truths as we experience the fun of a rousing, immersive read, rather than have them spelled out for us as “quotable quotes” in the text. That way, classroom discussions can become voyages of discovery, as you search for the deeper meanings that authors carefully left for you find in a story that might seem at first glance to be pure entertainment. I worked hard to make THE RAT PRINCE that kind of book. I hope teachers and readers will let me know if they think I succeeded.

Thank you so very, very much for hosting me!

It’s been my pleasure.