Classroom Connections is a series meant to introduce teachers to new books.

THE WICKED AND THE JUST – J. Anderson Coats 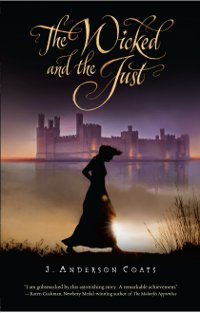 age range: 12 and up
setting: thirteenth-century Wales
discussion guide
Brilliant: a vision of history before the victors wrote it.
—Kirkus, starred review

I am gobsmacked by this astonishing story. This is a remarkable achievement, full of truth and compassion.
—Karen Cushman, Newbery Medal-winning author of The Midwife’s Apprentice

[An] unusually honest portrait of the effects of power…[Coats] offers us a potent historical novel.
—Horn Book, starred review

Please tell us about your book.
THE WICKED AND THE JUST takes place in 1293-1294 in north Wales, ten years into English rule.  Cecily is an unwilling transplant to the English walled town of Caernarvon, and she’d like nothing better than to go home.  Gwenhwyfar, a Welsh servant in Cecily’s new house, would like nothing better than to see all the English go home.  The ruling English impose harsh restrictions and taxation on the Welsh, and conditions in the countryside are growing desperate.  The rumors of rebellion might be Gwenhwyfar’s only salvation – and the last thing Cecily ever hears.
What inspired you to write this story?
The story grew out of a teenage research interest: Why didn’t Wales have a tradition of resistance against English dominance like Ireland or Scotland?  By the time I realized that the question wasn’t really valid, I’d discovered a little-known event in early colonial Wales – the rebellion of 1294-95, a response to aspects of English rule following the fall of native Welsh government in 1282-83.
The rebellion itself was fascinating, but the conditions that sparked it were more compelling still.  I wanted to explore the lived experiences of that first generation following the fall of native government – settler English and native Welsh alike – during a dynamic period in Welsh history.
Could you share with readers how you conducted your research or share a few interesting tidbits you learned while researching?
Medieval people were really pretty raunchy.  A lot of people in the modern era have this impression that medieval people were straight-laced and humorless, either because their lives were hard or because religion played a central role in their world.  This really isn’t true.  Medieval people had a deep and abiding love of poop and fart jokes, and they adored what we would call slapstick humor.  If people were getting hurt, they thought it was hilarious.  Medieval people were also fans of wordplay, especially the double-entendre.  They could make dirty puns like you wouldn’t believe.
How did you approach introducing a setting your audience might be unfamiliar with?
There’s a famous quote by L.P. Hartley that runs, “The past is a foreign country: they do things differently there.”  At its heart this is true, but deceptively simplistic.
Medieval people believed some weird stuff and their worldviews were shaped by the circumstances in which they lived, but not to the point that it altered their humanity.  Not to the point where the nuts and bolts of their everyday lives – love and work and worry – placed them beyond our understanding as people, even if their actions were at times bewildering.
When considering an era in which people believed that women were property and kings were divinely appointed by God to rule, it’s easy to focus on the differences between them and us.  It’s more useful to consider the fact that medieval people have a lot in common with us.  They had good friends, loved their pets, and got along with their parents (or didn’t).  They could be jealous and bored and spiteful, and at the same time more than capable of courtesy and benevolence.  And they looked toward the future with a mix of anticipation and anxiety.
The best historical fiction challenges readers’ assumptions about what “history” is, and how we in the present relate to people who lived the past.  It doesn’t judge the past based on our modern standards, but it renders the past – where violence solved any problem and animal cruelty was funny – normal and familiar.
In other words, one of my primary aims in THE WICKED AND THE JUST was to help readers view medieval people in a more familiar, companionable way, and to understand the historical context they inhabited by shining some light on a few misunderstood aspects of medieval culture.
What topics does your book touch upon that would make it a perfect fit for the classroom?