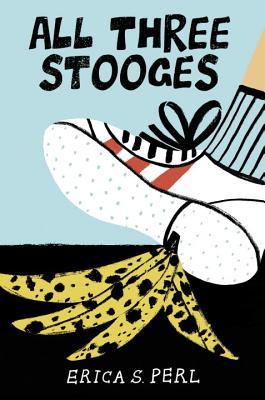 Perl has created a moving coming-of-age journey steeped in Jewish traditions and comedic history, elegantly balancing humor with an honest look at the impact of suicide. Noah’s genuine voice and tricky situation will have readers pulling for him.
–Publishers Weekly

This novel is excellent on multiple fronts. A satisfying story that will appeal to all middle grade readers.
–School Library Journal

Watching Noah repeatedly sliding on a banana peel (even, once, literally) gives readers plenty of occasions to wince, to chortle, and ultimately, to applaud.
–Booklist

Well, first, let me tell you what it is NOT about: The Three Stooges. It’s actually about Noah and Dash, two seventh graders who are best friends and comedy junkies. That is, they were best friends, until Dash’s father dies suddenly and Dash shuts Noah out. Noah is sad and frustrated and jealous (because he seems to be the only friend Dash has abruptly rejected). So, instead of accepting the end of their friendship, Noah risks losing everything – even his sense of humor – to prove that gone doesn’t have to mean gone for good.

My younger daughter’s best friend’s father, who was a friend of mine, died by suicide. And two adult friends of mine lost parents as a result of suicide when they were children. But, in all honesty, this book isn’t “about” suicide per se, though it does address the way depression and other mental illnesses can hide in plain sight. What I wanted to explore was the ripple effect of a tragedy. That’s why I chose to write from Noah’s perspective. He admired and adored Dash’s dad, so he feels the loss, too. But he is one step removed, so it is different for him than it is for Dash. And that makes it difficult for him to understand what Dash is feeling and why he is behaving differently than Noah might expect.

I interviewed teenagers and adults who had lost parents to suicide, and I read a lot of books. But the most important piece of my research was volunteering at a grief camp run by the Wendt Center for Loss and Healing. All the kids at camp had lost family members (though not all to suicide), and many of the campers I worked with were Dash and Noah’s age. By watching them work through their pain – and explore the freedom to separate from it – I came to a heightened understanding of the incredible range of ways kids process grief and loss. I tried as much as possible to capture and honor their lived experiences in ALL THREE STOOGES.

What are some special challenges associated with writing a “funny” book that explores a subject as serious as parental suicide?

It was really important to me to walk a careful line so no one – especially no one grieving – felt I was being casual or irreverent about loss. At the same time, I wanted to show how comedy and laughter can be a profound basis for human connection. And I wanted to show the way that humor can come from a place of pain while also helping people to heal.

The book explores several topics that would make it a perfect fit for the classroom. These include:

Erica has graciously offered to giveaway a signed copy of All Three Stooges. To enter, simply leave a comment below sharing why you’d like to read this book. The contest closes Tuesday, February 27. US residents only, please.