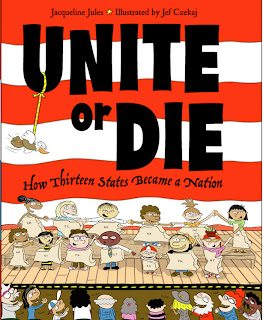 “A lively way to kick off discussions of how the Constitution works and why it’s still a living document . . . .” — Kirkus Reviews
“The vividly colored spreads will hold the interest of even middle school students and would be useful to introduce how our form of government was created. Students will enjoy presenting this book as reader’s theater.” — School Library Journal
“An original presentation of a pivotal point in U.S. history.” — Booklist
“[This book] reminds me a bit of Schoolhouse Rock. It takes important historical information about the United States, and conveys it in a fun, fresh format…. This is a must-have title for schools and libraries.” — Jen Robinson’s Book Page
What drew you to this topic? 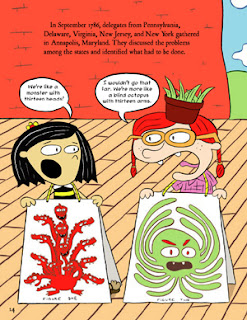 It was 2005, the year Public Law 108-477 went into effect, requiring public schools to provide an educational program on the U.S. Constitution on September 17th. At the time, I was working as a library media specialist in an elementary school. The classroom teachers at my school were swamped, and administration asked the specialists (librarian, art, and music) to take over the responsibility. My assignment was for the upper grades, 4-6. I wanted to do something the students would not only learn from but enjoy. So I wrote a four-page skit, briefly describing the bickering between the thirteen colonies after the revolutionary war, the need for a more unified government, and the crisis which almost caused the Constitutional Convention to fail. The characters were the thirteen original colonies who each spoke on behalf of their state.
We presented it on our in-house television show on September 17th. The kids had such a fabulous time rehearsing and performing it, I gave the script to a teacher friend at a nearby school. She said her students also had a blast with it. This gave me the itch to do something more with the material. But what? There is almost no market for student plays. A writing group friend suggested that I rewrite the skit with speech bubbles and try to sell it in comic book format. Originally, I thought it would be an easy endeavor. But I ended up re-writing the skit we performed entirely. I think there are only one or two lines from the original in the final book. I became engrossed in the subject matter, adding more and more information to my manuscript. The final product provides a hearty overview of why we needed a constitution and how our founding fathers ultimately created a document capable of meeting the needs of a growing country.
What were some interesting things you learned while conducting your research? 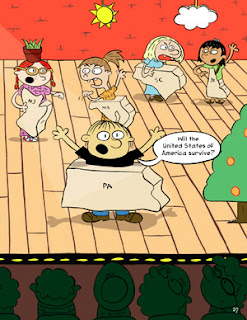 Governmental history is often thought of as a topic guaranteed to make you yawn. But the story of America’s constitutional government is filled with caffeine. The thirteen colonies behaved like squabbling children—fighting over borders and water rights. They refused to take each other’s money, making interstate business difficult and when Massachusetts had an insurgency problem, the other states saw no reason to help.  It really was Unite or Die in 1787. But the founding fathers haggled, more devoted to the autonomy of the individual state than the need to work together. Over the July 4th weekend, George Washington, president of the convention, was said to have looked as haggard as he did during the darkest days of Valley Forge. Many representatives thought the Constitutional Convention would disband and the United States of America along with it.
Then Roger Sherman came up with the Connecticut Compromise. When I began researching, I had no idea how close the thirteen original states came to dissolving. The pivotal compromise that preserved our union provided a natural arc for my narrative. It taught me that nonfiction writing should build to a climax, just like fiction. Unite or Die: How Thirteen States Became a Nation has supplemental notes at the end with all kinds of other fascinating facts. Did you know that the founding fathers devised an election system that gave the vice-presidency to the runner-up in the national election? What were they thinking! This period of American history captured my attention and I hope young readers will share my fascination when they read Unite or Die: How Thirteen States Became a Nation.
To whet student appetite for the subject, a downloadable  reader’s theater  is available for free on my website. I also have a song to share about that momentous summer called “In 1787.”
Happy Constitution Day!