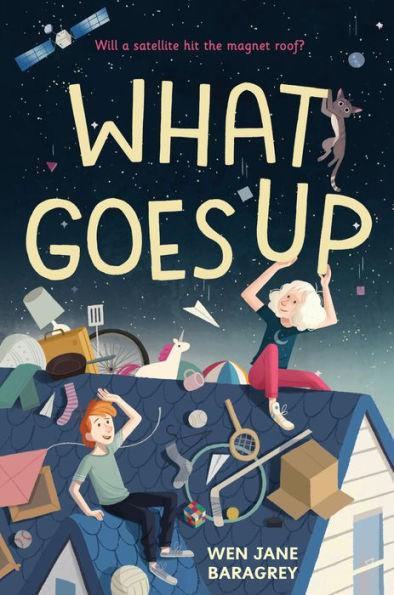 A quirky, heartwarming story of family and friendship. –Kirkus Reviews

With warmth and whimsy, What Goes Up explores the security of friendship, the permanence of family, and the comfort that comes from learning the place you belong. –Caroline Starr Rose, author of May B.

What Goes Up is about Robyn Tinkerbell Goodfellow, a girl who is surrounded by some very eccentric people in the quirky small town of Calliope. When she learns that a satellite has failed and will be crashing back down to earth soon, she believes that it will land on her house, with good reason. Everything from trees and kites to toys and sky divers has landed on her roof, earning it the nickname the Magnet Roof. Before the satellite squashes her and her home, Robyn needs to find her long-lost father so that he can either save her, or rename her so people won’t laugh when they hear she’s been tragically squashed.

Robyn is the sort of heroine with a can-do attitude, even when “can-don’t” might be a better idea. Her adventures lead her to meet some interesting people in some unexpected places. But will they lead her to the truth?

I hope that What Goes Up will provide both laughter and some thoughtful moments for its readers.

What Goes Up came from thinking about things that frightened me when I was Robyn’s age. The most memorable for me was when the Skylab satellite fell back to earth. From the moment I heard about it, I just knew it was going to land on my house. I wrote a will and even gave some of my things to my friends so they might remember me after my tragic demise. I’m not sure I got much of it back, come to think of it! But at that age, things like statistics and logic didn’t matter much to me. My world was getting bigger, and that made me feel smaller and more vulnerable. That felt like a very middle grade sort of thing to write about.

Wen, you aren’t going to believe this, but I just Googled Skylab and realized it’s the exact same satellite I worried about falling on me when I was a girl in Saudi Arabia! I wonder how many kids around the world felt the same?

Oh, Caroline isn’t that awesome?! I bet there were a LOT of us! It was so scary, and when you’re a kid it feels like the whole world is centered on YOU, so how could a falling satellite possibly land anywhere else? 🙂 It sure left an impression on me.

Most of my research, other than the details about falling satellites, involved learning more about albinism. I have a few visually impaired friends and acquaintances with albinism who were a great help, especially one who did a sensitivity reading for me. As someone with a disability myself, I wanted to write Robyn as a person who happens to have albinism, rather than the other way around.

What are some special challenges associated with writing a setting you’re not familiar with?

The biggest challenge I had when it came to the setting was making sure it felt American enough, since I’m a New Zealander. While I might write “rubbish” instead of “trash”, “torch” instead of flashlight, and “jandals” instead of “flip-flops”, it turns out that small towns, eccentric folks, and people in general are the same wherever you go. I made up the town of Calliope and the idea of it being a small town trying to hold on to its individuality when surrounded by a big city. It surprised me to discover that there are a few places in the world in the same position!

I think one of the themes in What Goes Up that means a lot to me is acceptance. The people of Calliope are an eccentric bunch, with Robyn’s own family and even her home being a good example of that. That doesn’t mean Robyn hasn’t faced down her own set of challenges when it comes to being accepted, but she deals with those in humorous and creative ways. Robyn is the sort of girl who accepts others and herself in equal measure, and I think some of her difficulties pose some good discussion points.

Through her adventures, for better or worse, Robyn learns what it means to be a good friend, that facing down your difficulties is a lot easier if you have someone beside you, and that family isn’t just who you’re related to, but who is there for you, too.

Thank you for having me, Caroline, and for your wonderful blurb for What Goes Up!

It was my pleasure. Your readers are in for a treat.