1.  There is no yesterday; there is no tomorrow. There is only you, scratching me under my chin right now.

The best haiku emerge from a right-this-instant experience – or from a memory of that experience.  Always use present tense to heighten immediacy and authenticity in your poems.

2.  When poised at a hole, remain still – and use your ears, eyes, nose, whiskers and mouth to detect a lurking gopher.

Observation is crucial to haiku. One must quiet the mind and use all five (or more!) senses to absorb, appreciate, and anchor the moment.

3.  Be patient. Then, when least expected – pounce!

Haiku captures a moment in time, revealing a surprise or evoking a response of a-ha! or ahhh. This pounce helps the reader awaken and experience the ordinary in an extraordinary way. 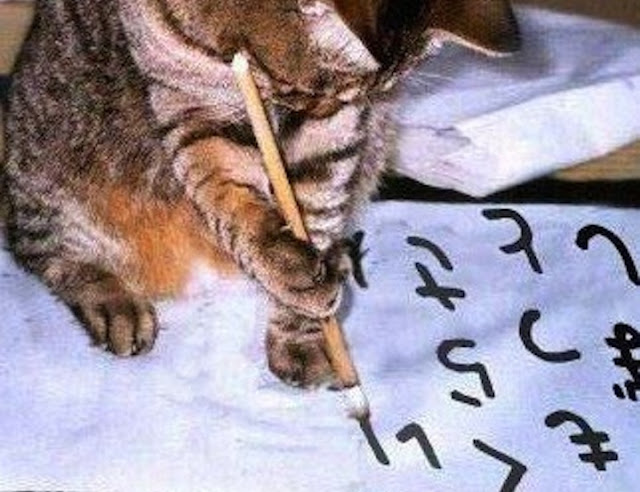 Japanese haiku feature a total of seventeen beats or sound units: five in the first line, seven in the second, five again in the third. This 5-7-5 form doesn’t apply to American haiku, however, because of differences in English phonics, vocabulary, grammar and syntax. Forcing an unnecessary adjective or adverb into a haiku simply to meet the 17-beats rule can ruin the flow, brevity and meaning of your poem. So feel free to experiment with any pattern you prefer (ie; 2-3-2, 5-6-4, 4-7-3) – provided the structure remains two short lines separated by a longer one. Remember: what’s most important here is not syllables but the essence of a chosen moment.

Traditional haiku focus on themes of nature, and always include a kigo or ‘season’ word. This doesn’t mean you must be explicit about the weather or time of year. A sensorial hint (ie; a green leaf versus one that is russet-colored) is all that’s needed.

6.  What part of meow don’t you understand?

Tease a cat and it won’t bother to holler – it will bite and scratch. It shows its annoyance rather than tells.  Good haiku follows suit. Instead of explaining, haiku illustrates a meaning or emotion through vivid imagery. Your poems should create a mental picture that captures the resulting feeling it evokes.

7.  If you refuse to play with me, I will snooze on your keyboard, flick pens off your desk, and gleefully shed into your printer.

Yes, haiku has ‘rules’, but remember to play! Use words as toys, and frolic with them in new ways to portray images, emotions, themes, conflicts and character.

8.  When in doubt, nap.
Good writing comes from revising. Set aside your poems and allow them to ‘nap’ for a few days. Then revise them with rested eyes, alert ears and a fresh mind.  And if too much rewriting causes the weary, bleary blues, well, there’s always that comfy looking couch…

Lee Wardlaw is generously offering a signed copy of her picture book WON TON — A CAT TALE TOLD IN HAIKU  (winner of the 2012 Lee Bennett Hopkins Children’s Poetry Award and the 2012 Myra Cohn Livingston Poetry Award) for one reader. Leave a comment below to enter. The contest closes Monday, 8 April. US residents only, please.

Lee Wardlaw claims that her first spoken word was ‘kitty’. Since then, she’s shared her life with 30 cats (not all at the same time!), and published close to 30 award-winning books for young readers.  Her picture book WON TON – A CAT TALE TOLD IN HAIKU won the 2012 Lee Bennett Hopkins Children’s Poetry Award and the 2012 Myra Cohn Livingston Poetry Award. A companion title, WON TON AND CHOPSTICK, will be published by Holt in 2015.