guest post by author Carolee Dean. Carolee and I are talking about verse novels at Alamosa Books (Albuquerque, NM) tomorrow at 2:00. We’d love to see you there! 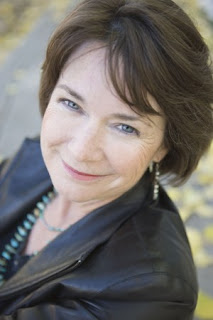 Novels in verse have become very popular with teens over the past few years and are a great way to engage students, including the sometimes hard to reach struggling reader.

Even so, these stories don’t come across as “easy readers.” Literary devices such as simile, metaphor, and personification abound. SBA tests frequently explore literary devices, yet these concepts and definitions are often abstract to students. They need numerous examples to recognize them, and verse novels often provide more examples of literary devices per page than other genres.

Internal Rhyme, Slant Rhyme, and Hip Hop
Poetry written for young children is filled with rhymes that can be used to explore word families and word endings. Using rhymes with older students is more challenging. Although most contemporary poetry for teens is written in free verse, these verses often contain internal rhyme and slant or half-rhyme (cat, bad). When asking a teen to produce a rhyming word, if they give a near rhyme, as poor readers often do because they don’t hear the distinctions between sounds, they can be given an example of an exact rhyme and then be instructed that what they gave was a good example of a “slant rhyme” instead of being told they are wrong. Rap and Hip Hop lyrics are filled with slant rhymes and words changed just enough in their pronunciation to sound like they rhyme. You could even ask students to bring in examples of slant rhyme from song lyrics.

Syllable Structure and the Use of Haiku
Writing haiku can be a great way to explore syllable structure for older kids who still find this a daunting task. In my work as a high school speech-language pathologist, I often pick a topic and then help kids brainstorm words related to the topic based on syllable count. We create a chart of one, two, three, four, and five syllable words and phrases related to the topic. I then type up the chart so that students who are poor spellers have a “word wall” of sorts to use as they write. I prefer this typed version of a word wall that students can use at their desks because many kids have difficulty copying from the board, which requires holding the word in visual memory.

Reading haiku can be a little trickier. Be aware that if you share published haiku with your students that it does not always follow the 5-7-5 syllable count. This is partly because Japanese syllables are shorter than many English syllables and translations are concerned with content rather than syllable count.

Books in the Classroom

One verse novel I frequently explore in the classroom is HOME OF THE BRAVE by Katherine Applegate. We use it at the high school where I work because it integrates with the ninth grade study of African culture. It’s the story of a boy named Kek who comes to America from a refugee camp after his father is killed. I have created a 17 page study guide for this novel that includes a “Literary Devices Treasure Hunt” and SBA type test questions. It’s available in the Teacher Resource section of my blog.

Another fabulous verse novel is MAY B. by former middle school teacher, Caroline Starr Rose and author of this blog. Check it out. It’s terrific, and I’m not just saying that because Caroline is awesome, even though she is. Mavis Elizabeth Betterly is a twelve year old girl who finds herself spending the winter alone in a sod house on the 19th century Kansas prairie. Reminiscent of Laura Ingalls Wilder, May has to struggle for her very survival, but her isolation is compounded by the fact that she cannot read. Struggling readers find inspiration in stories about other struggling readers overcoming great obstacles.

I hold a special place in my heart for struggling readers since so many of my students fall into this category. In TAKE ME THERE I explore the story of a young man who can’t read or write but dreams of being a poet. My verse novel, FORGET ME NOT will be released in October of this year. It is the story of a high school filled with ghosts and a fifteen-year-old girl’s desperate attempt to fit with the in-crowd, even if it costs her life.

If you’ve never heard of this fun and exciting genre, go to the library and check one out. They are usually fast and easy reads, but don’t be fooled, they contain a goldmine of learning opportunities.