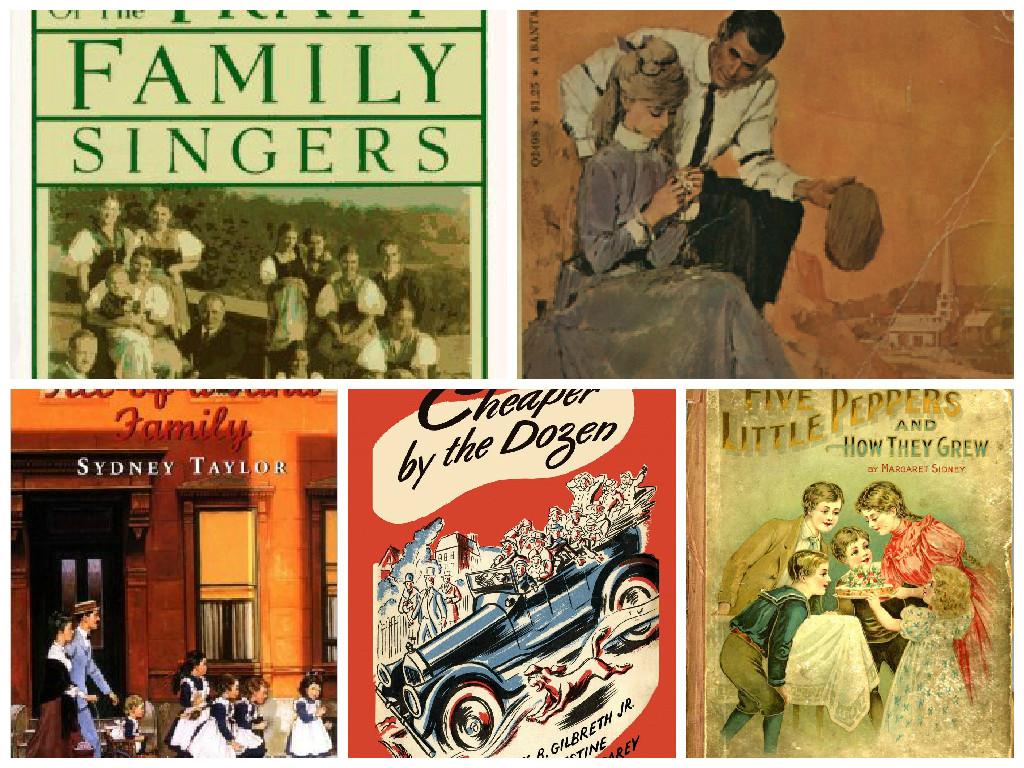 As a semi-only child (my half siblings are ten and twelve years older than I am), I’ve always been enthralled with books about families with lots of kids. Here are a few favorites:

Based on the author’s childhood, Papa’s Wife is about a Swedish pastor who marries his maid, raises a large family, and immigrates to the United States. Though I’ve only read Papa’s Wife, two more books follow: Papa’s Daughter and Mama’s Way.

The Story of the Trapp Family Singers

In a very similar vein, The Story of the Trapp Family Singers focuses on Austrian widower Captain Von Trapp, who marries his children’s nanny and immigrates to America. The Sound of Music, celebrating its fifth anniversary this year, is based on this book.

Five Little Peppers and How They Grew

Times are tough for the five children raised by their widowed mother, but their stories are always hopeful, sweet, and downright cosy. Oh, how I loved the Peppers when I was in fifth grade. Who wouldn’t want a baby sister named Phronsie?

Cheaper by the Dozen

; Belles on Their Toes

And two more based on a real family, the Gilbreths of Montclair, New Jersey. Mr. Gilbreth, an efficiency expert, and Mrs. Gibreth, a psychologist and engineer, use scientific methods to raise their kids. An especially fun thing for me to learn was that one of the younger Gilbreth boys — Dan, I think — ended up being my grandfather’s college roommate!

Ella, Henny, Sarah, Charlotte, and Gertie — I wanted to be the sixth sister in this series about a family living in New York at the turn of the twentieth century. Readers might recognize Sydney Taylor’s name from The Sydney Taylor Book Award, which is “presented annually to outstanding books for children and teens that authentically portray the Jewish experience.”

What books about large families would you recommend?