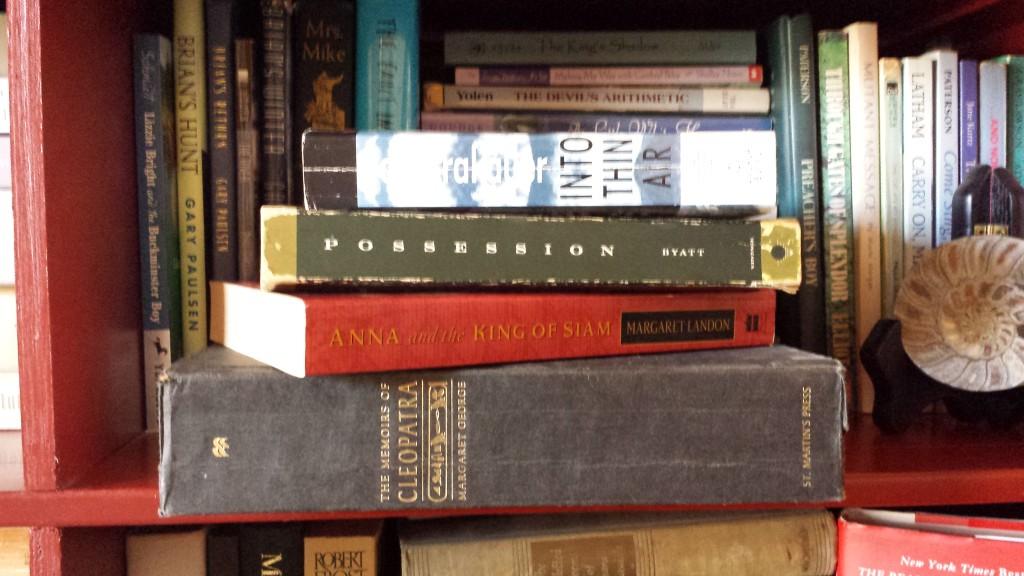 It feels like forever since I’ve run a Fast Five post! So long, perhaps I need to explain myself again. Fast Fives are books thematically grouped together. Here are some that still get plenty of views:

Today’s Fast Five books are ones I devoured with infants at home. Those early days, I wasn’t good for much other than baby care and reading (how perfect is it that feeding a baby fits so nicely with cruising through a book?). My boys are middle schoolers now, but these five books continue to be favorites:

Into Thin Air: A Personal Account of the Mt. Everest Disaster —

I’d seen the IMAX movie about the 1996 climb where eight people had lost their lives and was fascinated. Survival stories have long been a favorite (I wonder if this read subconsciously influenced that little survival story I later wrote?), and I was GLUED to this book. I’ve gone on to read Krakauer’s Into the Wild

and Under the Banner of Heaven

. He could write about anything, and I’d be hooked.

The first time I saw this book I was a freshman in college, but didn’t read it until years later when I found it in a used bookstore. Possession now ties for first place (with The Count of Monte Cristo

) as my favorite book of all time. There’s poetry! Romance! Mystery! History! Dual story lines that weave in and out of one another! A ticking clock! And overall there is spectacular, spectacular writing.

The Name of the Rose

My freshman year at Hendrix College, my History of Christianity professor showed us the movie version of The Name of the Rose. This is the only Eco novel I’ve ever read (something I must remedy someday). It’s monks, middle-ages, and mystery — super engrossing. A great read.

Anna and the King of Siam

This is the book The King and I musical was based on. I’ve had a life-long crush on Yul Brynner (don’t laugh) and had recently seen Anna and the King, a 1999 movie based on the same true story of British school teacher Anna Leonowens‘s experiences teaching in the court of Siamese King Mongkut. While the book has been criticized for some cultural inaccuracies, the story is a true adventure.

The Memoirs of Cleopatra — Margaret George:

Margaret George is a master. As a historical novelist, I’ve learned it’s vital to make sense of a character’s actions and motivations as they unfold alongside true history. Margaret George has this down pat. One of the things that continues to stick out for me is George’s ability to make the Egyptian / Roman battles come alive. And then there’s the Julius Caesar and Mark Antony romances. Goodness all around.