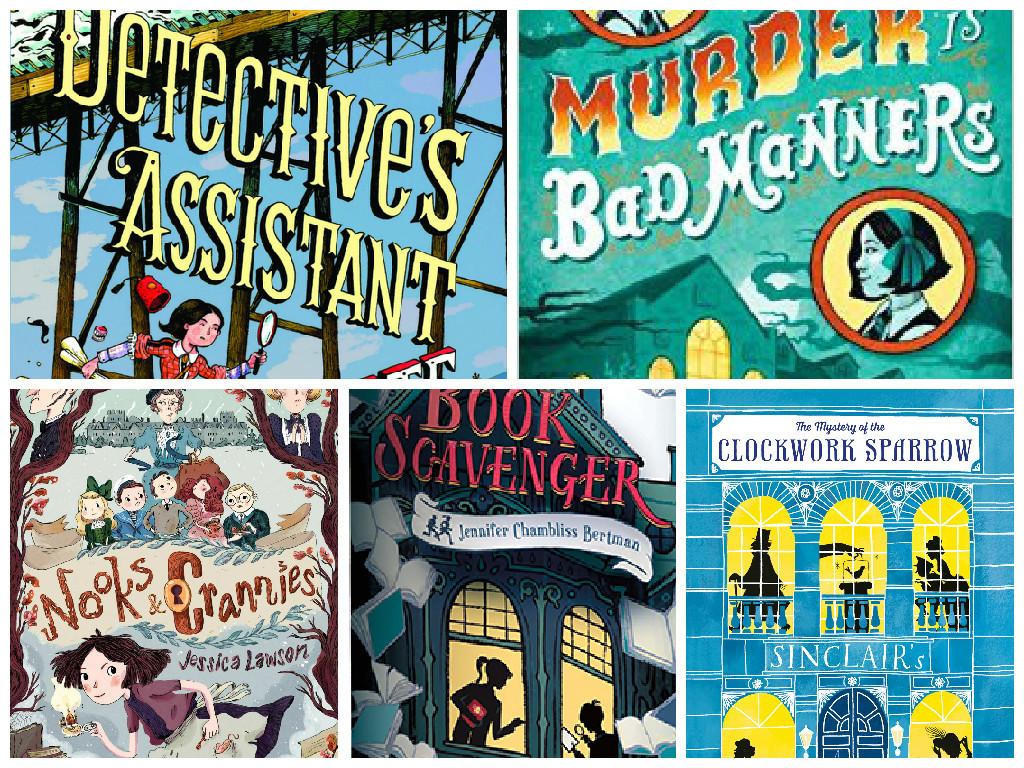 I’ve noticed a variety of new books aimed at young readers with girl detectives as the lead. Yes, please! Here are a few that came out this year. All descriptions come from Amazon.

Charlie and the Chocolate Factory meets Clue when six children navigate a mansion full of secrets—and maybe money—in this humorous mystery with heart.

Sweet, shy Tabitha Crum, the neglected only child of two parents straight out of a Roald Dahl book, doesn’t have a friend in the world—except for her pet mouse, Pemberley, whom she loves dearly. But on the day she receives one of six invitations to the country estate of wealthy Countess Camilla DeMoss, her life changes forever.

Upon the children’s arrival at the sprawling, possibly haunted mansion, it turns out the countess has a very big secret—one that will change their lives forever.

Then the children beginning disappearing, one by one. So Tabitha takes a cue from her favorite detective novels and, with Pemberley by her side, attempts to solve the case and rescue the other children…who just might be her first real friends.

Based on the extraordinary true story of America’s first-ever female detective, this fast-paced adventure recounts feats of daring and danger…including saving the life of Abraham Lincoln!

Eleven-year-old Nell Warne arrives on her aunt’s doorstep lugging a heavy sack of sorrows. If her Aunt Kate rejects her, it’s the miserable Home for the Friendless.
Luckily, canny Nell makes herself indispensable to Aunt Kate…and not just by helping out with household chores. For Kate Warne is the first-ever female detective employed by the legendary Pinkerton Detective Agency. And Nell has a knack for the kind of close listening and bold action that made Pinkerton detectives famous in Civil War-era America. With huge, nation-changing events simmering in the background, Nell uses skills new and old to uncover truths about her past and solve mysteries in the present.
The Mystery of the Clockwork Sparrow — Katherine Woodfine ****
You are cordially invited to attend the Grand Opening of Sinclair’s department store! Enter a world of bonbons, hats, perfumes and Mysteries around every corner. Wonder at the daring theft of the priceless Clockwork Sparrow! Tremble as the most Dastardly criminals in London enact their wicked plans! GASP as our bold heroines, Miss Sophie Taylor and Miss Lilian Rose, Crack Codes, Devour Iced Buns and vow to bring the villians to justice…The Mystery of the Clockwork Sparrow is the first book in a sumptuous mystery-adventure series for 9+ readers, full of vivid Edwardian period detail. Perfect for fans of Chris Riddell, Enid Blyton, Robin Stevens Murder Most Unladylike and Nancy Drew.
Book Scavenger — Jennifer Chambliss Bertman **

For twelve-year-old Emily, the best thing about moving to San Francisco is that it’s the home city of her literary idol: Garrison Griswold, book publisher and creator of the online sensation Book Scavenger (a game where books are hidden in cities all over the country and clues to find them are revealed through puzzles). Upon her arrival, however, Emily learns that Griswold has been attacked and is now in a coma, and no one knows anything about the epic new game he had been poised to launch. Then Emily and her new friend James discover an odd book, which they come to believe is from Griswold himself, and might contain the only copy of his mysterious new game.

Racing against time, Emily and James rush from clue to clue, desperate to figure out the secret at the heart of Griswold’s new game–before those who attacked Griswold come after them too.

Murder is Bad Manners — Robin Stevens *, ***
Two friends form a detective agency—and must solve their first murder case—in this “sharp-witted debut” (Publishers Weekly, starred review) that is the first adventure in a brand-new middle grade mystery series set at a 1930s boarding school.Daisy Wells and Hazel Wong are best friends at Deepdean School for Girls, and they both have a penchant for solving mysteries. In fact, outspoken Daisy is a self-described Sherlock Holmes, and she appoints wallflower Hazel as her own personal Watson when they form their own (secret!) detective agency. The only problem? They have nothing to investigate.
*    Have wanted to read this book since it first sold
**   Read and enjoyed
***  On my library request list
**** Boo, my library doesn’t have it yet