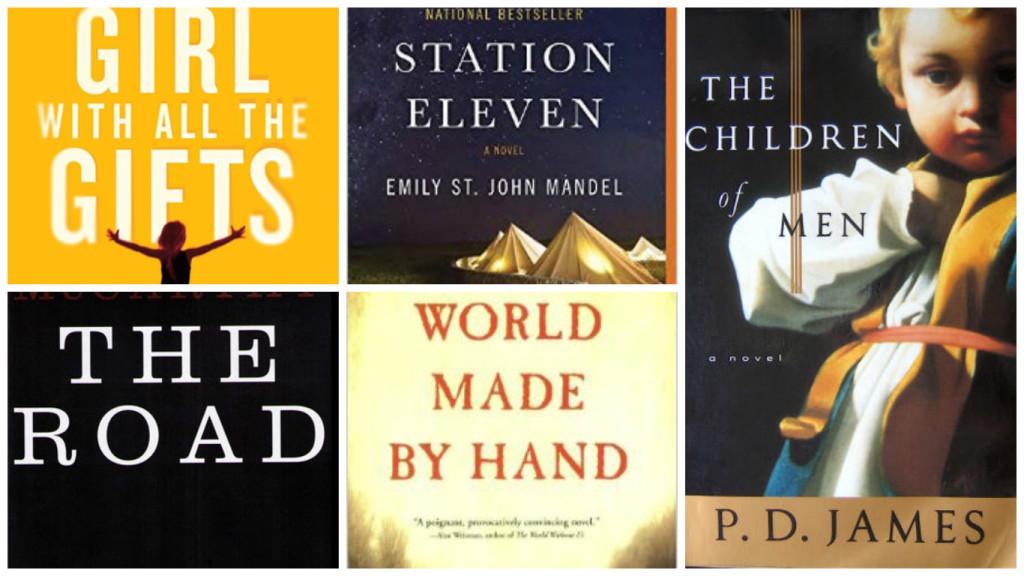 There are a slew of young adult post-apocalyptic novels out here but not as many (that I’m aware of) for grown ups.* I find these books interesting on two counts — the commentary on society as we know it and the theories about what in the human spirit and society in general would endure catastrophe and what might morph and change. Here are a handful I’ve enjoyed with their jacket flap descriptions as well as a few thoughts of my own.

The Children of Men

Told with P. D. James’s trademark suspense, insightful characterization, and riveting storytelling, The Children of Men is a story of a world with no children and no future. The human race has become infertile, and the last generation to be born is now adult. Civilization itself is crumbling as suicide and despair become commonplace. Oxford historian Theodore Faron, apathetic toward a future without a future, spends most of his time reminiscing.

Then he is approached by Julian, a bright, attractive woman who wants him to help get her an audience with his cousin, the powerful Warden of England. She and her band of unlikely revolutionaries may just awaken his desire to live . . . and they may also hold the key to survival for the human race.

I adore P. D. James’s mysteries, so when I found this book at my Michigan library almost ten years ago, I quickly picked it up. The description mentions both a “world with no children” and a woman and her band who “may…hold the key to the survival for the human race.” It’s not too hard to determine perhaps not everything is as first expected. One scene that especially stayed with me had to do with the elderly and death. Chilling and thought-provoking.

A father and his son walk alone through burned America. Nothing moves in the ravaged landscape save the ash on the wind. It is cold enough to crack stones, and when the snow falls it is gray. The sky is dark. Their destination is the coast, although they don’t know what, if anything, awaits them there. They have nothing; just a pistol to defend themselves against the lawless bands that stalk the road, the clothes they are wearing, a cart of scavenged food—and each other.

The Road is the profoundly moving story of a journey. It boldly imagines a future in which no hope remains, but in which the father and his son, “each the other’s world entire,” are sustained by love. Awesome in the totality of its vision, it is an unflinching meditation on the worst and the best that we are capable of: ultimate destructiveness, desperate tenacity, and the tenderness that keeps two people alive in the face of total devastation.

Probably the bleakest book of the five. The Road does end on a note of hope, but it’s a whisper-y, frail sort of note. The writing isn’t the lush McCarthy you’re probably familiar with but reflects the story exactly as it should. Not recommended as middle-of-the-night when you can’t sleep, in case you’re wondering!

The Girl With All the Gifts

Melanie is a very special girl. Dr Caldwell calls her “our little genius.”

Every morning, Melanie waits in her cell to be collected for class. When they come for her, Sergeant keeps his gun pointing at her while two of his people strap her into the wheelchair. She thinks they don’t like her. She jokes that she won’t bite, but they don’t laugh.

The Girl With All the Gifts is a groundbreaking thriller, emotionally charged and gripping from beginning to end.
This is a book you really shouldn’t know anything about before going in. It’s probably my favorite on the list. Weird and fun and crazy and wild. I devoured it** while on a family road trip.

An audacious, darkly glittering novel set in the eerie days of civilization’s collapse, Station Eleven tells the spellbinding story of a Hollywood star, his would-be savior, and a nomadic group of actors roaming the scattered outposts of the Great Lakes region, risking everything for art and humanity.

One snowy night Arthur Leander, a famous actor, has a heart attack onstage during a production of King Lear. Jeevan Chaudhary, a paparazzo-turned-EMT, is in the audience and leaps to his aid. A child actress named Kirsten Raymonde watches in horror as Jeevan performs CPR, pumping Arthur’s chest as the curtain drops, but Arthur is dead. That same night, as Jeevan walks home from the theater, a terrible flu begins to spread. Hospitals are flooded and Jeevan and his brother barricade themselves inside an apartment, watching out the window as cars clog the highways, gunshots ring out, and life disintegrates around them.

Fifteen years later, Kirsten is an actress with the Traveling Symphony. Together, this small troupe moves between the settlements of an altered world, performing Shakespeare and music for scattered communities of survivors. Written on their caravan, and tattooed on Kirsten’s arm is a line from Star Trek: “Because survival is insufficient.” But when they arrive in St. Deborah by the Water, they encounter a violent prophet who digs graves for anyone who dares to leave.

Spanning decades, moving back and forth in time, and vividly depicting life before and after the pandemic, this suspenseful, elegiac novel is rife with beauty. As Arthur falls in and out of love, as Jeevan watches the newscasters say their final good-byes, and as Kirsten finds herself caught in the crosshairs of the prophet, we see the strange twists of fate that connect them all. A novel of art, memory, and ambition, Station Eleven tells a story about the relationships that sustain us, the ephemeral nature of fame, and the beauty of the world as we know it.

Fabulous. You can read my earlier thoughts here. There are some strong parallels with World Made by Hand.

World Made by Hand

In The Long Emergency celebrated social commentator James Howard Kunstler explored how the terminal decline of oil production, combined with climate change, had the potential to put industrial civilization out of business. In World Made by Hand, an astonishing work of speculative fiction, Kunstler brings to life what America might be, a few decades hence, after these catastrophes converge.

For the townspeople of Union Grove, New York, the future is nothing like they thought it would be. Transportation is slow and dangerous, so food is grown locally at great expense of time and energy, and the outside world is largely unknown. There may be a president, and he may be in Minneapolis now, but people aren’t sure. Their challenges play out in a dazzling, fully realized world of abandoned highways and empty houses, horses working the fields and rivers, no longer polluted, and replenished with fish. With the cost of oil skyrocketing—and with it the price of food—Kunstler’s extraordinary book, full of love and loss, violence and power, sex and drugs, depression and desperation, but also plenty of hope, is more relevant than ever.

Like Station Eleven, this book reminded me of the show Revolution. I found the exploration of faith in both books interesting and disturbing, but utterly realistic. So much to think about on how communities might re-start after cataclysmic change.

*I’m not saying in anyway that readers can’t or shouldn’t read books outside their age classification (A good book is a good book for anyone. Those of us who write for children probably preach this most of all.), I’m simply sharing the way these books were classified by their publishers.

**humorous attempt at a teeny-weeny spoiler