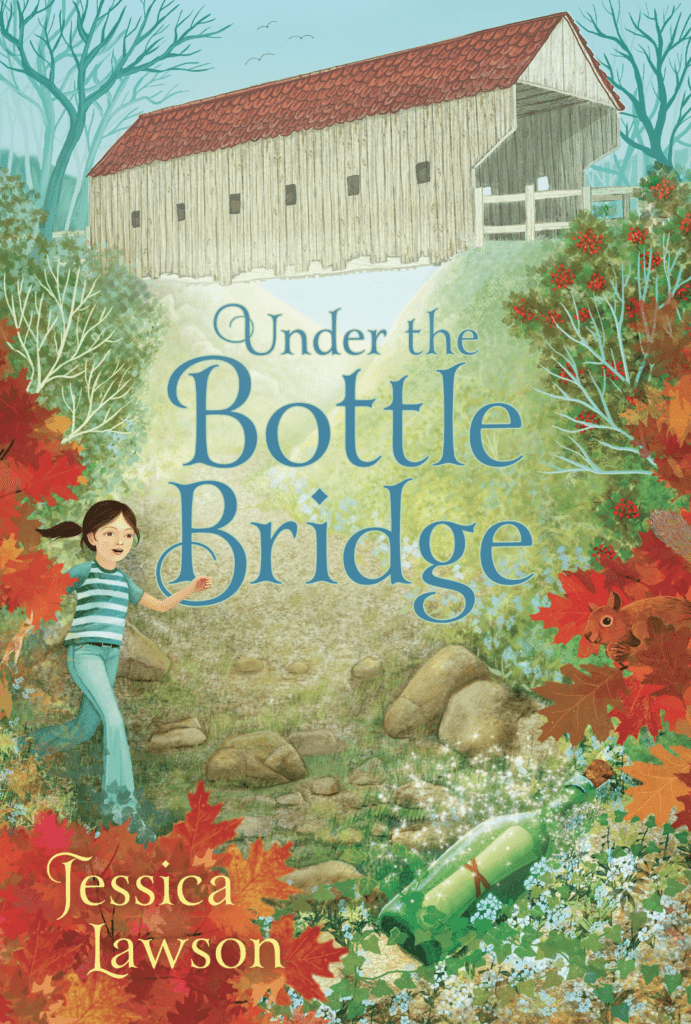 In the weeks leading up to Gilbreth, New York’s annual AutumnFest, twelve-year-old woodcraft legacy Minna Treat is struggling with looming deadlines, an uncle trying to hide Very Bad News, and a secret personal quest. When she discovers mysterious bottle messages under one of the village’s 300-year-old bridges, she can’t help but wonder who’s leaving them, what they mean, and, most importantly…could the messages be for her?

Along with best friend Crash and a mystery-loving newcomer full of suspicious theories, Minna is determined to discover whether the bottles are miraculously leading her toward long-lost answers she’s been looking for, or drawing her into a disaster of historic proportions.

Thank you so much, Caroline, for having me on your blog! My book Under the Bottle Bridge

comes out next week, and I’m excited to share Minna Treat and her modern-day artisan village with the world. The village of Gilbreth is filled with weavers, glassblowers, blacksmiths, and chandlers (candlemakers). Minna is a woodcraft legacy—her family helped found the village of Gilbreth 300 years ago, and she’s about to create a craft project that will be judged at the annual AutumnFest. Her goal is to win and the stakes are high, both for family pride and for a prize that might help her avoid moving to a new town.

My own interest in traditional arts can be traced directly to a shoebox diorama. In 6th grade, my social studies teacher Mr. Bayles announced a unit on medieval Europe. Castles & knights? Yes, please! Everyone was super excited; we all thought we’d spend a good deal of time jousting in the gym. Instead, we studied the economics of feudalism.

Feudalism had its engaging learning moments, but it had nothing on what we studied next—craft guilds. Guilds were associations of artisans and merchants who oversaw certain crafts and services in towns/villages. Guilds provided a way for skills to be passed down to the next generation. I learned that the kids my age didn’t go to school. They became apprentices—a magical word to me.

The apprentice would work for 5-9 years, then become a Journeyman, who could be paid for his work. The Journeyman would sometimes create a “Masterpiece” and present it to the Guild in hopes of gaining the title of “Master.” Minna’s project, she feels certain, has to be a Masterpiece. Nothing less will be worthy of her family history.

Mr. Bayles had all of us in the palm of his teaching hand as he described the guilds as part trade union, part mobster societies that protected their own. Blacksmiths, potters, masons, painters, tanners, cloth makers, cobblers, apothecaries… every single craft was one that I wanted to learn. For my diorama project, I chose the Weavers Guild. I worked ridiculously hard on this project that was worth maybe 10 points. I wish I’d taken a photo of it.

When I began writing Under the Bottle Bridge, I wanted the setting to be its own character. The past is very much alive in the village of Gilbreth, and it has a heavy influence on Minna. The children of serious artisans that settle in Gilbreth have a certain pressure placed upon them to continue their family craft. Those expectations are clear, and those who choose to follow other paths are sometimes referred to as “lost.” Minna is the last of the very long line of Treats in Gilbreth. Becoming “lost” has never been an option for her.

As we educate our children/students, I think that high expectations placed upon young learners can work both ways—they can encourage spirits or overwhelm them. In Under the Bottle Bridge, Minna is wavering between those two things as she words toward her goals. Here’s a book excerpt that speaks to that:

My nine-times-great grandfather Treat once helped build a boat that brought people to America.

My five-times-great grandfather Treat built wagons that brought people to and from Gilbreth.

My four-times-great grandfather Treat built a church for the Gilbreth villagers to gather in and homes for them to live within.

My mom made the grandfather clock standing in our hallway.

I love Gilbreth and can’t imagine my life anywhere else… but every now and then I wonder if the generations of artisans who stay in this town aren’t secretly like the turtle doves we tamed long ago. We’re all kept so nice and cozy and fed on memories that we’ve forgotten what it means to migrate.

In terms of classroom connections, I think Minna’s story could lead to fun research projects about the nature of craft guilds and apprenticeships and expectations (and perhaps the role of gender in regard to craft guilds). Another project might involve interviewing family members about personal history that led them down certain career paths.

Thanks again, Caroline! A hardcover winner will be chosen from comments on this post. The contest closes Monday, September 4. US residents only, please.

Ride On, Will Cody! Is now available for pre-order. Click through to learn more!