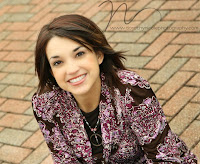 Sometime in the early 90s

I was bored. Second semester of seventh grade, and somehow I had managed to land myself the easiest schedule ever. I started going through three books at the library a week. I started writing notes to my friends like crazy. I started–well, I started a book.

I took a piece of notebook paper, folded it in half, and wrote “Walk Me Home. By Tamara Hart. Chapter 1.” This became my biggest obsession. I didn’t finish writing the book until right before school started in eighth grade. But I did finish it.

And then I forgot about it.
Ten years later, in 2006, I found it again.
The first thing I did was sit down and read it. The plot was good, but the presentation was totally lacking. I had incorporated all of the common conventions of the time: a flashback in the first chapter, long descriptive paragraphs of introduction for each character. And also, the characters were too young. At ages 12 and 13, I couldn’t really explore the tragedy and situation of being kidnapped. I couldn’t make something bad happen to children.

So I began to rewrite. The characters got older. I cleaned it up, taking out lengthy descriptions and random silliness that made me roll my eyes.

I submitted Perilous on June 16, 2009, to five different publishing companies. On June 25, I got an email from WiDo Publishing’s acquisition editor. The email said that my novel was under review and WiDo wanted to know if there was a sequel, since the story didn’t conclude.

I got all excited, because it looked like someone was interested enough to inquire about a sequel. (I mean, if you didn’t like the first one, would you care about a sequel?) I responded right away, letting her know about my outlined sequel. Then I sat on pins and needles, waiting.

On July 6, I received another email. This one said:
We are very impressed with your submission. Your story is incredible, fast-paced and a really, really good read. Your plot development is excellent, and the characters are also well-developed and likeable, except for the villains, who are incredibly frightening.

In conclusion, WiDo would like to offer you a contract and work with you on the editing, as long as you are willing to revise so that it could be marketed to a broader demographic.

Um, yeah? Of course I said yes. Thus my novel went from being a YA coming-of-age novel to a YA thriller/suspense novel. In some ways, I felt like I sacrificed a lot of my original plot so that I could get it published. But the end result? It’s published.

Tamara Hart Heiner lives in Arkansas with her three children and husband. Her first novel, Perilous, was released by WiDo Publishing in November 2010. To find out more about Tamara and her novel, visit her website at www.tamarahartheiner.com.