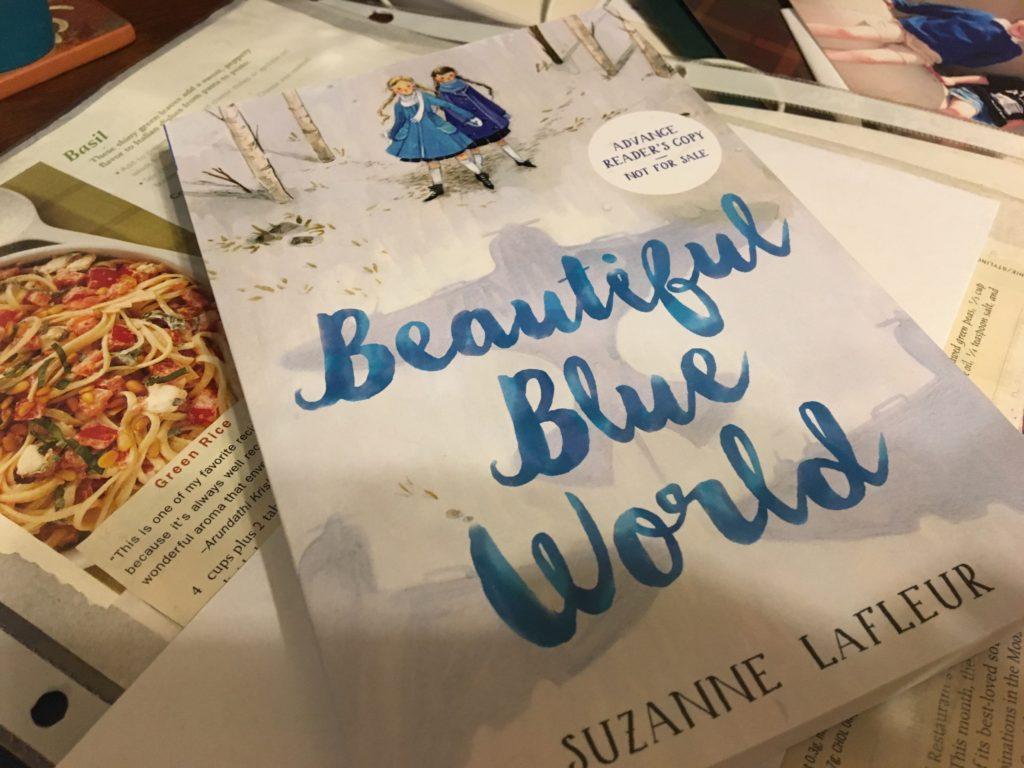 I’ve been a fan of Suzanne LaFleur since she published Love, Aubrey in 2009. Thank you to Penguin Random House for arranging this interview.

You don’t shy away from writing about kids in tough circumstances, yet do so with respect and understanding of your young audience. I’d love to hear what’s drawn you to topics such as depression and war and any advice you might give about including real-life hardships in middle-grade.

I suppose I’ve always been drawn to sadness, in a literary sense.

I was at a birthday party as a child, and the birthday girl’s mother asked, “I hear you like reading. What do you like to read about?”

“The Holocaust,” I answered.

I think she was shocked. But she had a respectful, adult conversation with me.

I might have forgotten this incident entirely, if it weren’t for another young guest at the party, who caught me for a moment, alone, and said, very seriously, “I couldn’t say it in front of everyone, but that’s what I like to read about, too.”

In an emotional (if not physical) sense, that girl took my hand and never let go.  Beautiful Blue World is dedicated to her, though this is the first time I’ve made the connection between the memory and the book.

“We want you to teach fifth grade English,” the administration said. “Starting next week. The kids voted to read The Devil’s Arithmetic. We need someone who can teach the Holocaust to ten-year-olds.”

The rest of the staff said, “The fifth graders? They’re a handful. They’re disrespectful.”

The parents said, “The fifth graders? They’re babies. They don’t need to know.”

They were all wrong about the fifth graders.

The fifth graders were thoughtful and sensitive. They were desperate to know, to talk. Each day, I put a question on the board; they responded in writing, in conversation, and then in writing again. The questions asked impossible things, like Why?

One morning, a boy came to me before class and asked, “Can I put the question on the board?”

He took the chalk and wrote.

I turned my paper to show him: I had prepared the very same question.

The fifth graders said, “We miss being read to.”

My first book, Love, Aubrey, was in editing, so I read them my own work about abandonment and grief. They handled it with their usual grace. They worried for Aubrey, but they bravely faced her trials with her.

I’ve never set out with the intention to create “a sad book” or  “a war book.” When I begin writing, I have a single scene, image, or conversation stuck in my imagination. I write to find out more. Love, Aubrey began with a child alone, and I wrote to find out why she was alone. It turned out, the answer was sad. Beautiful Blue World began with a family and their neighbors enduring bombings; I wrote to see what would happen to them. It turned out, a war was changing their lives.

When it comes to sadness in their literature, children only deeply internalize what they are ready for. The sad events serve merely as plot points, at first.

When they do start to understand, their experience generally falls into at least one of three positive outcomes:

Identifying with the character or events on a personal level. Many, many children write to me about their own hardships, saying that they felt utterly alone until they found this particular book. Some children do experience extreme sadness, loss, and depression, and these children need support.

Building empathy. While perhaps many children haven’t suffered traumatic events directly, most of them know someone else who has. This group of children writes to me to say they didn’t really understand what their friend, neighbor, cousin, parent, etc. went through until they read about it, and that what they read made them want to be more kind to others.

Building emotional resources. There have also been a lot of children who wrote to me, casually and cheerfully, only to write back months or years later to say:

“We moved and I have no friends here.”

“I have trouble getting out of bed in the morning.”

The incredible thing is that, when the unthinkable happens to them, these children already have somewhere to go to ask for help and know that they aren’t alone.

Of course, children should laugh and play and have fun. But we do them a disservice if we strive to hide the fact that life can also be hard. They need to think about the tougher things, at least a little, to be prepared to face them.

My advice is just to be faithful to your story and honest with your audience. They’ll take in the hard stuff when they’re ready for it. And your text will be waiting for them when they need it.

As I read Beautiful Blue World, I was reminded of the books Ender’s Game and The Mysterious Benedict Society. Did any books inspire your work?

Not in particular. Just a lifetime of reading war stories.

I love this idea you carry throughout the novel, that “it is easy to protect yourself and your loved ones; it is harder to protect and care about others.” Without giving too much of your story away, did you know from the start the way these words would play out in Mathilde’s life?

I didn’t. When I start writing a book, I only know a single scene, and that was the case for Mathilde’s story, too. I write a bunch of scenes all out of order, sequence them, and fill in any gaps. Only after there’s a whole draft do I see what themes have emerged; I go back and highlight them throughout. So these words, which are said to Mathilde by her mother, were added to explain and justify elements I believed in, and then they became guidelines as I made further changes.

How do family and friendship shape both Mathilde and her story?

Even when she’s not thinking about it consciously, Mathilde is almost always driven by her desire to protect and help her best friend, Megs, and her family. As her life changes and starts to include more people, she thinks more about the others in the world, and how her actions and choices might affect them.

What are the advantages and challenges of writing about a fictional world, especially one experiencing war?

Creating a fictional world for Mathilde was ultimately very freeing. I could evoke familiar places, but not be tied down to actual events or borders. I changed the names of some of the instruments of war, so that if they operated differently than our real ones, it would be okay.

The biggest challenge was ensuring that the reader would feel immersed in the world as orchestrated through the eyes of a narrating character. When writing in first person without direct address, all world-building has to be done gently, because it would seem unnatural for the character to explain too much backstory. You’re also limited to expressing only what that character would see and know. I avoided heavy descriptions unless Mathilde was seeing something new-to-her, as well as going on at length about the conflict itself, allowing Mathilde to state only her simplistic understanding of it. Sparse description has always satisfied me as a reader, especially when I was younger, because I wanted to envision a world and its characters my own way. So if you want to envision Mathilde’s house as your own house, or Mathilde’s mother as your own mother, I tried to leave plenty of room for that to be possible. I concentrated much more on the fearful mood of Mathilde’s world, so that readers would feel present emotionally.