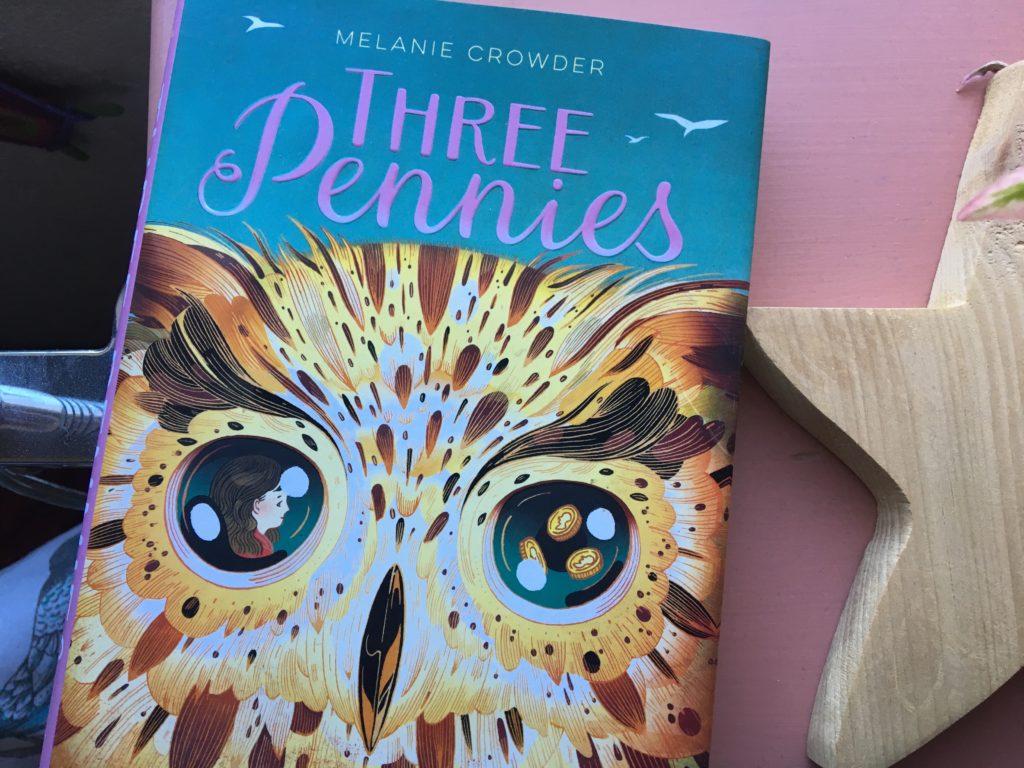 Please tell us about your newest book, Three Pennies

Three Pennies is the story of a girl named Marin who is in foster care. It’s also the story of an owl (named Owl), a kind-hearted doctor named Lucy, a harried social worker named Gilda, and the shifting tectonic plates below San Francisco.

It’s a story about family, and finding the courage to live life with a wide open heart.

This is the third book of yours I’ve read, Melanie, and I have to say I’m in awe. You have a huge rage — from contemporary to historical to fantasy, from verse to prose. What types of stories draw you and how do you find their form?

Thank you for saying that, Caroline!

You know, when I was in grad school, I spent some time thinking about what I wanted my career to be like. There is such a push in this industry to focus your efforts, to write one kind of story over and over again so that readers will know what to expect when they see your name on the cover of a book; so they can be sure that if they loved one of your novels, they will love all of them.

There is wisdom in that way of thinking. It makes a lot of sense for sales and marketing efforts. But I decided years ago that what I wanted instead was range. I dreamed of a varied and broad career as an author. I wanted to embrace creative challenges and constantly push myself to try new things.

A really cool side-effect of that goal is that when you write all kinds of stories, they call for all kinds of storytelling forms. Before I wrote Audacity, I never would have believed that I would ever write a novel in verse. But when you’re open to possibility and you’re paying attention to how your story wants to be told, you sometimes end up in unexpected places.

For Three Pennies, I recognized pretty early on that the story would include a host of characters, and I got really excited at the idea that I could write an all-knowing narrator to guide the reader in and out and back and forth between the different story threads. This was new for me, and seriously, so much fun to write!

Those of you who have read my YA titles, Audacity and An Uninterrupted View of the Sky will have guessed that social justice is important to me. And those of you who have read my middle grades may recognize common themes of overcoming loss and rising above trauma or finding family in unconventional places. Even if my novels and their genres, age range, and formats are vastly different, there is commonality at the heart of the stories, and it’s that heart that draws me.

I was really interested in how Marin’s story unfolded structurally. The book has 71 chapters and is written from perspectives as varied as eleven-year-old Marin, several adults in her life, an owl and even the Earth itself! Some chapters felt like vignettes (which reminded me of verse) while others played out as scenes. How did you determine how a chapter unfolded? How did you decide which characters we’d hear from (and the ones we wouldn’t)?

Telling this story was like fitting together a giant puzzle. Each of the peripheral characters had a role to play in leading Marin to the resolution of her story, it was just a matter of figuring out when each of them would show up.

The tectonic plates needed to appear at regular, though rare intervals; an inescapable reminder that no matter how desperately Marin tried to defy change, the very ground beneath her feet insisted upon it.

The fact that I had not one, but two adult characters is a little unconventional for middle grade. Gilda was so much fun to write. I have never been a social worker, but I spent more than a decade working in Title 1 schools, so I know very well what it feels like to constantly be working under an oppressive workload and within a system that exists for the well-being of the children it serves, but that can sometimes stand in the way of their well-being.

Giving Lucy a scattering of chapters meant that the reader knew some things Marin didn’t. We’ve all been in the middle of a book or movie where we want to reach into the story and stop the protagonist from doing something foolish or dangerous because we have some insight they don’t—it’s an incredible device to build tension—if it’s not overused.

And Marin did get herself into some tricky situations. That’s where Owl comes in: a wise, protective presence to watch over the girl if she got herself into too much trouble.

More than anything, Marin’s story needed to keep moving forward—I couldn’t get so wrapped up in all the other story threads that I lost that forward momentum. So arranging the chapters was a little like plotting a mystery: starting at the end and backtracking, laying the path and dropping hints and clues like breadcrumbs at just the right intervals so the reader would eagerly gobble them up.

There were several words that ran through my head as I read: Tenderness. Loyalty. Chance and choice. Shifting. Acceptance. What words come to mind when you think of Three Pennies?

I love that—chance and choice. Family, for sure. Connection.

Could you talk a bit about foster care and how those touched by Marin’s story might become involved?

Oh, thank you for asking this!

As I detail in the book’s afterword, approximately 400,000 kids currently live in foster care in the U.S. Some children are eventually reunited with their birth families, while some are adopted by new ones. Unfortunately, thousands of youth age out of the foster care system each year and enter adulthood without a family to lean on for support and love.

There is so much we can do to help these kids! The first step is to look up your state’s foster care website. From there, you can connect with organizations in your county. Your support can look like so many different things, from sponsoring a child’s involvement in after school enrichment activities, sports or summer camps to helping coordinate fundraising events; from organizing book or toy drives to covering the cost of college textbooks. And, of course, there is always a need for people willing to open their homes and hearts to welcome a foster kid in need.

Melanie has generously offered a signed copy of Three Pennies to give away. To enter, simply leave a comment below. The contest closes Friday, June 23. U.S. residents only, please.