Classroom Connections is a series of posts meant to introduce teachers to new books. Today I’m interviewing myself!


May B. – Caroline Starr Rose 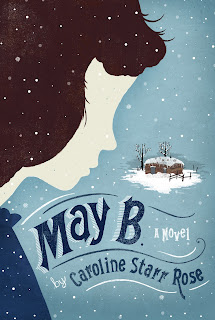 School Library Journal review:
Told in spare, vivid verse, May’s story works on many levels; as a survival story, a coming-of-age tale, and a worthwhile next read for “Little House on the Prairie” fans.


Publisher’s Weekly starred review:
Writing with compassion and a wealth of evocative details, Rose offers a memorable heroine and a testament to the will to survive.


Hornbook review:
The verse novel form is particularly well suited to this spare survival story set on the homesteaded Kansas prairie. Rose uses a close-up lens and a fine sense of rhythm to draw us into her stark world, Little House on the Prairie without the coziness.


Kirkus starred review:
As unforgiving as the western Kansas prairies, this extraordinary verse novel—Rose’s debut—paints a gritty picture of late-19th-century frontier life from the perspective of a 12-year-old dyslexic girl named Mavis Elizabeth Betterly… May B. for short.


Please tell us about your book.
Mavis Elizabeth Betterly, or May B. as she is known, is helping out on a neighbor’s Kansas prairie homestead, “Just until Christmas,” says her Pa. Twelve-year-old May wants to contribute, but it’s hard to be separated from her family by fifteen long, unfamiliar miles.


Then the unthinkable happens: May is abandoned to the oncoming winter, trapped all alone in a tiny snow-covered sod house without any way to let her family know and no neighbors to turn to. In her solitude, she wavers between relishing her freedom and succumbing to utter despair, while trying to survive in the harshest conditions. Her physical struggle to first withstand and then to escape her prison is matched by tormenting memories of her failures at school. Only a very strong girl will be able to stand up to both and emerge alive and well.


In this debut novel written in gripping verse, Caroline Starr Rose has given readers a new heroine to root for, one who never, ever gives up.


What inspired you to write this story?
Because of my childhood love for the Little House on the Prairie series, I wanted to create my own strong pioneer girl. I was also curious how someone might write about solitude and challenged myself to experiment with a storyline that would confine one character to a limited space (believe me, there were many times I didn’t feel up to this challenge!). I’d also fallen hard for Gary Paulsen’s Hatchet and wanted to create a survival story told from a girl’s perspective.


May’s name, Mavis Elizabeth Betterly, came to me before I did any character development. I liked the way I could shorten Mavis Betterly to May B. and loved the way her name hinted at the wishy-washy word “maybe” (which is a word like mediocre or okay; it doesn’t carry a lot of conviction), but also contained the strong word “better”. Though I wasn’t quite sure of the specifics, I determined there had to be something in May’s life that made her feel mediocre, something she longed to do better and something that spoke not only to her lack of ability but also her sense of worth.


As a teacher, I’d always wondered how children with learning disabilities had fared at a time before their challenges were understood, especially in the days when recitation and reading aloud were the major means of instruction. Dyslexia became a perfect obstacle for a child striving to do better and mirrored nicely May B.’s theme of isolation.


Could you share with readers how you conducted your research or share a few interesting tidbits you learned while researching?
My first attempt at writing had been historical fiction, and I learned from that disastrous manuscript that regardless of the history, the story had to belong to the character; I couldn’t beat historical facts into my readers’ heads. I went into May B. trusting that if I kept my protagonist’s perspective and understanding of her world, enough history would organically seep in.


One special challenge was locating where May’s sod house stood. There’s a reference in the story to Tom Sawyer, so the book had to take place in 1876 or later. I wanted her in a part of western Kansas that wasn’t very developed and was semi-close to a railroad. It was also necessary to have wolves around. The first place I located May was outside of Dodge City, where she would have been smack dab in the middle of the Chisolm Cattle Trail — not exactly the solitude I was looking for (I also wasn’t interested in telling the sort of rowdy cowboy story that Dodge City brings to mind). The story couldn’t take place much beyond 1880 because in order to have wolves, buffalo still needed to be prevalent; by 1880 these animals were largely wiped out. Gove County, Kansas became a good location: the railroad (and therefore surrounding communities) was still relatively new but old enough to have been there before 1880; the short-grass country of western Kansas supported sod houses; and wolves, while not spotted everyday, would have still roamed in packs at this time.


What are some special challenges associated with writing a verse novel?
May B. didn’t start as a novel in verse. I poked around with some scenes in prose but quickly found the writing wasn’t right. I wasn’t close enough to the character. I wasn’t telling the story as honestly as I could. Continuing with my research, I picked up Elizabeth Hamsten’s Read This Only to Yourself: The Private Writings of Midwestern Women, 1880-1910. Reading these women’s first-hand accounts was like finding a magic formula: their stark, terse, matter-of-fact way of sharing their lives showed me May’s voice. I began writing again, this time in verse, and the story fell into place.


What topics does your book touch upon that would make it a perfect fit for the classroom? 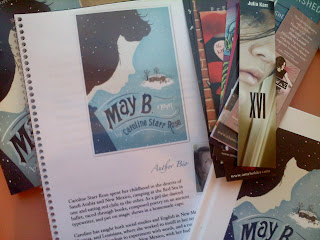 one marked-up copy of MAY B. (an insider’s look into the story)
one copy of the MAY B. study guide (CD-ROM included)
one MAY B. journal
one packet of 2011 bookmarks
To enter, comment below about your favorite historical read. The winner (randomly selected) will be announced Monday, 1/23.

*Please only enter the giveaway today if you plan on using the book in an educational setting (classroom, library, book club, etc.).