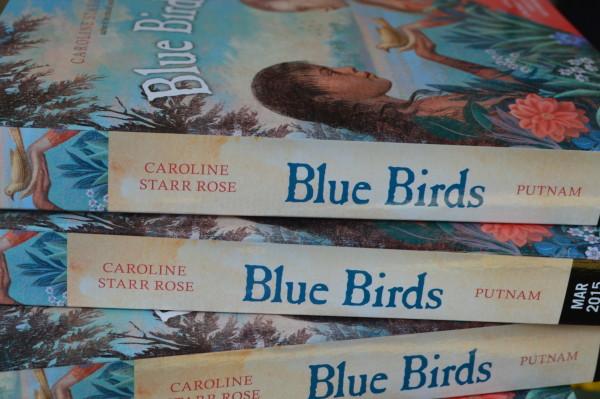 Please indulge me. I’m a bit gaga over my new book.

Those of you who receive my newsletter have already read this, but I thought it might be fun to share here, too. Since the cover for BLUE BIRDS was revealed in June, I’ve gotten a few questions, the first being this:

Where are the blue birds?

There are two ways to answer: The cover has zero…or three.

The wooden bird the Kimi and Alis share is a representation of the Eastern bluebird — a gift given to Alis by her Uncle Samuel. I sent the Balbusso sisters a link to John White’s watercolor of iacháwanes (the Roanoke word for this bird). I love the echoes of his work Anna and Elena have included, such as the shape of the blue bird’s tail.

The other two blue birds on the cover? They are my girls, Kimi and Alis. Which brings us to the second question: How do you pronounce these girls’ names?

Alis is the Elizabethan spelling for Alice (as is Alys or Alyse. Those Elizabethans, they never were consistent). I have to confess Kimi is a website find, a name simply listed as an Algonquian* girl name. I can’t speak to its veracity or even its proper pronunciation, but in my head Kimi is Keemee (and not Kimmy). Kimi’s name means secret, which was a huge draw for me, as the girls’ friendship is a forbidden one.

*Algonquian is a language family with over two dozen dialects. The Roanoke spoke a now extinct Algonquian dialect.