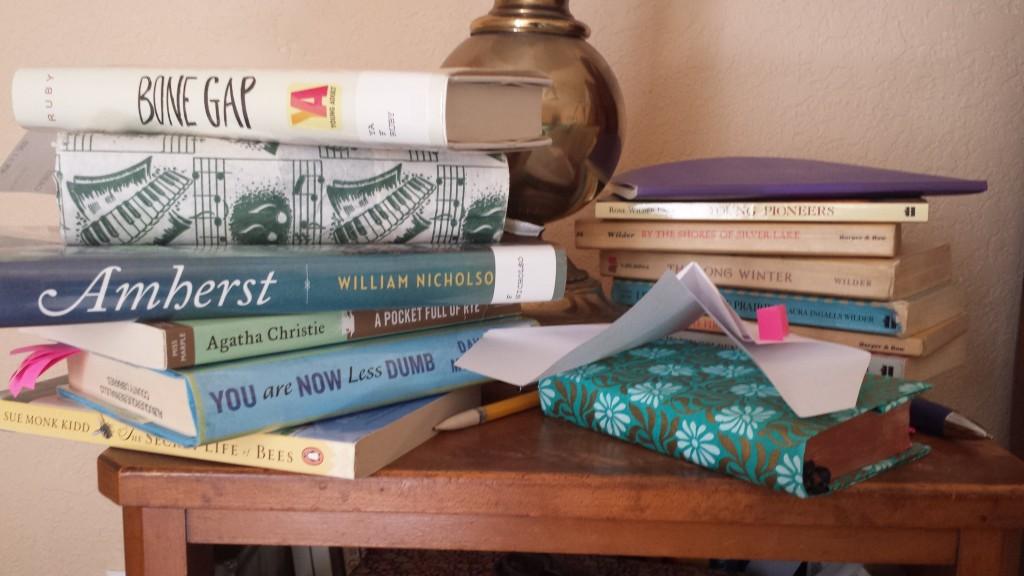 Remember this (relatively) neat and tidy picture from a few weeks ago? Things have changed a little around here. Part two of the Laura Ingalls Wilder class has begun, meaning I have five Laura books to re-read plus her daughter Rose’s Young Pioneers

(Something I read just a few months before thinking up May B.

I know it played into my story in some way. Curious about finding parallels.).

I finished Fish in a Tree

and You Are Not So Smart

(both so good!) and have added in Amherst

(because I can’t pass up an Emily Dickinson book, especially one that deals with a key storyline in Lives Like Loaded Guns: Emily Dickinson and Her Family’s Feuds, which I read a few years ago.

, which has gotten such amazing buzz (and was super quick to show up in my request queue).

My younger guy requested a new Agatha Christie to read together. So I added A Pocket Full of Rye

to the pile. This is the same kid who made me that wonderful paper airplane.

The purple notebook is full of notes I took while reading You Are Not So Smart and will perhaps, perhaps be used in some sort of future novel. Who knows? The stickies I used to mark quotes have been transferred to You A

re Now Less Dumb , since I’m sure there’ll be more I’ll want to write down. One, of course, is decorating my paper airplane because it’s extra pretty that way.

There are three pens stashed up there because I’m always convinced I won’t have one when I start on the Sunday crosswords. I suspect the pencil is left over from picture book drafting (because I can’t draft in pen and I refuse to work a crossword that way).

So now you know what’s going on in my little corner of the reading world.