Our culture at large has rather limited ideas about what poetry is. The average person on the street typically thinks of rhymed ditties about pretty panoramas, lovesick longings, or rainbow-laced dreams. Or perhaps broken-line ruminations on big topics like death, war, human nature, or tiny ones like butterfly wings, a twirling maple seed or tea leaves in the bottom of a cup.  This sort of poetry, which focuses on description and feeling, is called lyric poetry.

But there’s another whole branch that shares characteristics with fiction, like a plot, characters and sometimes even dialogue: narrative poetry. Narrative poetry comes out of oral tradition, when stories were shared around the fire. Rhythm, repetition, rhymes made the stories easier to remember and thus pass on from one hearer to another. Ancient, epic stories of adventure and valor, like The Odyssey and Beowulf are some of the earliest examples written down.

Over time, poets realized any kind of story could be made more memorable and even singable if set in verse. The troubadours of the Middle Ages told tales of tragic love, and talents like Geoffrey Chaucer wittily satirized the culture of the day through rollicking, bawdy tales in verse. Later, narrative poems became more like versified flash fiction, such as this striking piece by Robert Frost, “Out, out—”.

Novels-in-verse are of course a type of narrative poetry. But like the epic poem form they derive from, each section tends to lose something when removed from the overall story. The sections or pieces are meant to be read as a unit. That aspect makes them trickier to write than one might initially expect.
If novels-in-verse interest but intimidate you, or you’re primarily a fiction writer wanting to try out poetry, short, free-verse narrative fiction is a great place to start. In fact, you might find benefit taking material you’ve already written and recreating it in verse format. 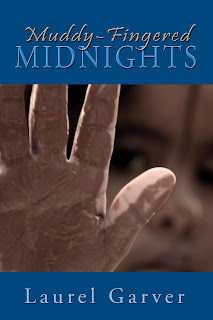 One of the poems in my collection Muddy-Fingered Midnights, “Storm Shelter” began as an experiment like this. I took a scene from my novel in progress, in which the protagonist’s boyfriend invites her to see his childhood secret hiding spot, and their relationship deepens because of it.

I summarized and trimmed the prose versions, worked in evocative vocabulary and sound patterns, and even experimented with portmanteau (blending two distinct words). There’s not a huge event at the center of this piece, but there is a plot arc, moving from entering the story world, to conflict, resolution and denouement. What makes it poetry is the condensed emotion, sparse words, sound patterns, and layers of meaning. (A more strongly plotted piece that wasn’t derived from prose is “North and South,” also reprinted in my collection.

Writing poetry a great way to develop not only your writing skills, but also your publishing credits. There are thousands upon thousands of literary journals seeking poetry submissions. If you’ve done any writing at all, you have raw material. (For ideas on how to turn delected scenes into poems, see my post Giving Life to Peripheral Stories.)


Read, learn from, and emulate published poets, and you too can write stories that sing.

Laurel Garver is a magazine editor and author of the poetry collection Muddy-Fingered Midnights and the novel Never Gone.  Her poems have appeared in Ancient Paths, Every Day Poets, Poetry Pact volume 1, Rubber Lemon, Daily Love and Drown in My Own Fears. An indie film enthusiast and incurable Anglophole, she lives in Philadelphia with her husband and daughter.