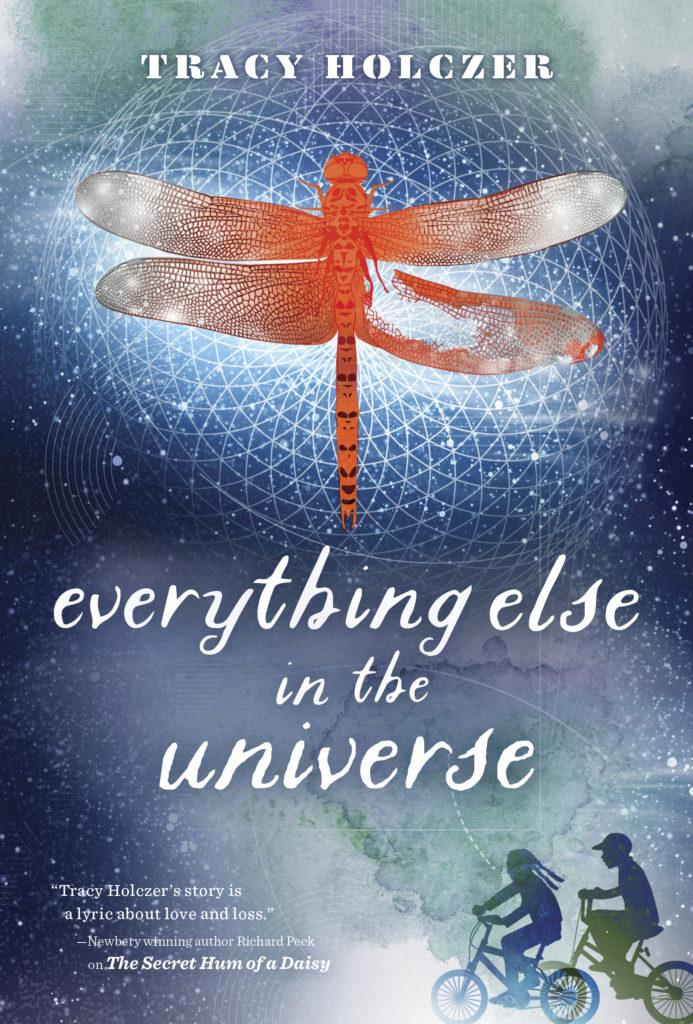 Tracy Holczer spent her first twelve years in San Jose, California with her boisterous Italian family. Everything Else in the Universe

is a love letter to that family, the pink kitchen where she discovered her nonni’s secret ability to infuse food with love, and the San Francisco Bay Area in all its foggy glory. Her critically acclaimed first novel, The Secret Hum of a Daisy, made several state lists and garnered starred reviews. A full time writer, Tracy lives in Los Angeles with her family, one fluffy dog and three cats.

A character and her circumstances always come first. There is always some type of brokenness that she’s learning to overcome. Because Lucia had a disabled father, I wanted to do something that involved the effects of war and PTSD as that closely aligns with personal experience, although not exactly. The era worked for many reasons in support of this story. For one, we are living through politics and war scenarios that are similar to today, so I thought it a good way to showcase those circumstances through the lens of history. I also thought it was important to show the sacrifices children make when their parents go to war. Often we see Vietnam era stories for middle grade readers that involve brothers, but rarely a parental figure.

I felt it was important to go to everyday things to get a feel for the era, so I ordered the Farmer’s Almanac and the Sears and Roebuck catalog to get a sense of the weather, fashion and home decor. Even though I grew up in the 70’s, I wanted to be as authentic as I could. I went to the San Jose Library and read every day of the San Jose Mercury news in microfiche for the summer of 1971. I read Life, and Boy’s Life Magazines for the same time period. I was fortunate enough to have a friend getting rid of a 1970’s set of World Book Encyclopedias and used them often. I interviewed Vietnam veterans and a heart surgeon. I called and talked to people in the national headquarters of the VFW and American Legion (which was where I found out their organizations turned away many Vietnam vets early on). I went into veteran chat rooms and read many first person accounts of the war. I also read Letters from Vietnam, a book of letters from veterans who lived and died. All of this gave me a sense of the time and place and got me inside the heads of the people of the time, both military and civilian.

I draft and research simultaneously. When I reach places in the story that will need verification of facts, and it’s not something easily accessible, I’ll flag it for future study.

I love digging into the details and getting things exactly right. It’s one area where my perfectionism doesn’t hold me back.

Knowing I’ll still make mistakes. Like this one. Among the many researched subjects were dragonflies. I decided the main dragonfly of the story needed to be red for its spiritual significance and visual impact and came up with the Flame Skimmer. It worked for where the character had been living with his family, and the cover design team latched on to it as a strong element for the cover. So I sent images of the real dragonfly and they did a beautiful rendition. But somewhere along the way, I changed the location of where the family had lived and built more story around that, forgetting all about my very regional Flame Skimmer. By now the cover is done with a dragonfly that doesn’t live anywhere near my character!

I was lucky enough to find a similar red dragonfly from the right region. But dragonfly aficionados are going to know the difference.

The obstacles definitely come with researching the details. For another example, it took me hours to find out where fireworks shot from in Chicago on July 4th of 1970. There were conflicting reports and finally, I ended up with a research librarian in Chicago who found a newspaper for July 5, 1970 with the headline FIREWORKS AT SOLDIER FIELD! We both cheered when he found it.

The most interesting thing I found was that during World War II, the military was all set to invade Japan, and so they had thousands of Purple Hearts made in anticipation of the casualties. But then they dropped the bombs on Hiroshima and Nagasaki instead, which ended what was left of the war. So they had a surplus. More were ordered in 1976, but then they found a stockpile that had fallen off the records. They are still handing out purple hearts meant for the grandfathers and great-grandfathers of the people who receive them today.

This is a great article: https://historynewsnetwork.org/article/1801

Has your research ever affected the overall trust of your book? How so?

For sure. As hard as I researched, the copyeditor still found many errors. So if she is human, too, (although I wonder sometimes about copyeditors!) there are still probably errors in the story. But, at least, I didn’t knowingly leave anything I knew wasn’t accurate to fit the storyline – although it was tempting! (see the Flame Skimmer above)

Other stops on the blog tour