Jeannie Mobley writes middle grade and YA fiction. Her debut novel, KATERINA’S WISH (Margaret K. McElderry Books), won the 2013 Colorado Book Award, is on the 2014-2015 William Allen White Award Master List, and represented Colorado at the 2013 National Book Festival.  Her second novel, SEARCHING FOR SILVERHEELS, released September 2, 2014. When not writing or reading fiction, Jeannie is a mother, wife, lover of critters, and an anthropology professor at Front Range Community College, where she teaches a variety of classes on cultures past and present. You can visit her at www.jeanniemobley.com.

I tend to start with big ideas–themes or threads that I then build a story around. In Katerina’s Wish, I started with ideas about what constitutes “magic” and to what extent our own attitudes shape our luck in the world. In my newest book, Searching for Silverheels, I was interested in two varying views on a local legend, and how either way, the character could be seen as a “strong woman.” That got me thinking about what really constitutes strength and womanhood, and it went from there. My next step is matching the setting and historical time period to my idea.

The fact that I can find historical settings to focus the lens on topics, themes, or social issues. For example, in Searching for Silverheels, I chose World War I to explore the issues surrounding strong women, because women are called to do a wider range of things in wartime than at other times. And World War I had the unique additional feature of the clash between President Wilson and the Women’s Suffragist Movement. Of course, I could tell a story about all the ways women are strong in any place or time, but I like historical fiction because I can pick times and places to make the issues much more intense.

I use different sources at different points in my research. I have a background in history and historical research, so that eliminates much of the initial work I might otherwise have to do. But, in the early stages of formulating an idea or picking a time period, I rely heavily on informational websites and textbooks–the kind of sources that give broad overviews of a topic or time period.

My next step is to create ideas for world building–getting the local setting, the voice, and the details of ordinary life right. This involves reading sources from the era–newspapers, books, reports–anything that gives me a sense of how people wrote or talked. I also look at oral histories that give details of life. Since I write for kids, I especially like oral histories in which people are remembering back to their childhood, because those give me details about what life was like for kids, which is often lacking from history books.

I also love to look at historic photographs for background details, and especially ones that evoke other senses (like the smoke boiling from chimneys in turn-of-the-century coal camps. I try to think about how that must have smelled, how gritty the air must have felt, how the laundry drying on the line must have taken on that smoke.).

There are many good sources for all of these things, but since my work so far has been centered in Colorado, I’ve found the Western History Archives at the Denver Public Library to be a wonderful source of photographs, www.coloradonewspapers.org to be a great place to read for voice, and a variety of sources of oral history, the most extensive being the National Archive oral history project, which has many recordings online that let you hear the actual voice of the teller, as well as the details.

Not long, or even at all. If I’m working with a new place or era with which I’m not familiar, I might spend a few hours doing background research, and a few more listening or reading for voice. I may read a novel written in the era or watch a movie set in the area (not really research–more just a good excuse to read a book or watch a movie.) But mostly, the story is most important to me in the first draft, and it guides me as to what details I need to find. So I research as I write the first draft. For example, in my current WiP, I had a conversation going on between the front seat and back seat of a car in 1930. I had a character glance in the rearview mirror to see the people in the back,  and realized that I don’t know for sure when the rear-view mirror became standard in vehicles. So, I made a note in the margin–“would the car have a rearview mirror?” and when I finished writing the scene, I stopped to look it up. 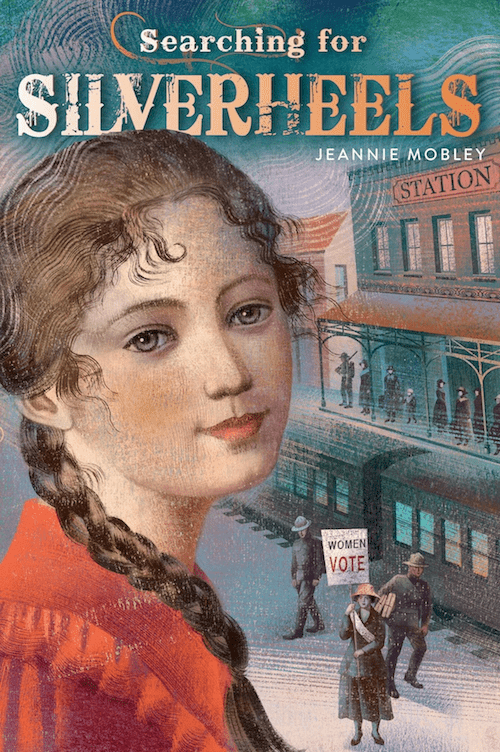 I tend to love (and get lost in) the quirky details, but also the strange connections. So, I lost a whole day one time on the history of toilets on trains. Fascinating, if you go in for that kind of thing. And I am often stunned by connections that sometimes make me feel like I’m channeling instead of creating. In my newest book, Searching for Silverheels, I needed a last name for a character. At the time, my son was in high school, so he was getting recruitment mail for colleges. There was an envelope sitting on the table from Stanford University. I looked at it, changed it from Stanford to Sanford, and made it the kid’s last name. Later, while doing some back-up research on the Silverheels legend, I learned that one of the “eye witness” stories that claims to know the truth about the legend is in a manuscript at the Colorado Historical Society, written by a man named Sanford. The Sanford in my story is searching out an eye witness, just as the real Sanford was. So, I adjusted the story so that my fictional Sanford hears the same story that the real Sanford heard. But the names, that was just a crazy coincidence that sent a chill up my spine when it happened.

In Katerina’s Wish, I was deliberately vague and never named the coal camp in which the main characters live. I did this because I wanted to avoid the political implications of setting the story in the place where one of the major battles of labor union history took place. Many readers have made the connection, which is fine, but I didn’t want to imply that my characters were directly part of a movement.

On the other hand, in Searching for Silverheels, I did want to connect my suffragist to the real women’s suffrage movement, so I set the story in the exact month and year when the members of the National Women’s Party were arrested at the White House, and that arrest is a catalyst for setting up the climax of my story. I did, however, create some fictional responses to that event that I don’t think really happened. I am always careful to create an author’s note that clarifies the real from the fictional, but I also think that some of the fun for readers of historical fiction can be looking up the truth themselves, and seeing where the author has been honest and where she’s told lies.

I think historical fiction has the opportunity to give kids a passion or curiosity about the past. I think a lot of people are turned off by the idea of “history” because they see it as the dull retelling of a bunch of boring dates about boring politicians. It took me years to figure out that people saw history that way, because for me, history was always about story. I grew up in the west where I could explore old cabins and travel roads that used to be railroads or wagon trails, and to me, that continuation of the past, as a compilation of extraordinary stories about ordinary people, is what history has always been about. Hopefully, historical fiction can make kids (or adults) see history that way too.