Kate Hannigan writes fiction and non-fiction for young readers. She got hooked on historical fiction when she discovered a copy of The Thorn Birds

on the tippy-top highest shelf when she was in seventh grade – clearly forbidden reading, which made it even better! She used to work in daily newspapers but now spends her time down the rabbit hole researching her next books. The

Detective’s Assistant was named a 2016 Golden Kite Award winner from SCBWI, a Booklist “Best of 2015” pick, as well as a “Best of the Best 2015” book with Chicago Public Library. Visit Kate online at KateHannigan.com. 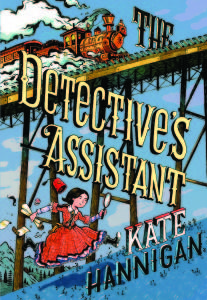 Why is historical fiction important?
It’s a window into the past, and for children who are meeting historical figures for the first time in our books, it’s so important that we engage and inform as well as entertain. If a reader really takes to a historical fiction work, then that might open up a whole new world to them. They might dig deep into learning more about a particular era in history, or pursue more historical work. It’s very exciting!
What kinds of sources do you use?
I try to do full-immersion research, and I tap from anywhere I can find material. Right now, for a new project, I have a couple documentaries I’m watching, stacks of library books (shhh, don’t turn me in, but I use FOUR cards for our public library; mine and my three kids’ cards), original writing or reporting when I can find it, as well as museum trips so I can see and absorb all I can.
For The Detective’s Assistant, I was wandering the Chicago History Museum when I saw their beautiful exhibit of Daguerrotypes. And I knew at that moment that a framed photo like I was seeing in the museum would play a part in my book.
To get a sense of the language of the times, I try to read books that would have been in circulation at the time my book is set. So for The Detective’s Assistant, I read books like Uncle Tom’s Cabin, which published in 1852 but would have still been read and discussed when my book is set in 1859. Sister Carrie, which came later, helped me understand the desperation a woman might feel moving to the big city and trying to fend for herself in the 19th century.
I found a copy of “Godey’s Ladies Book,” the popular magazine of the 1850s, for sale on eBay. So I got an 1856 copy and read what women in my book might have been reading. And newspapers! I am a former newspaper gal, so my heart is with newspaper research. The headlines, the way stories are presented, the language of the times: newspaper archives are a rich source of understanding the day to day living.
What are some obstacles writing historical fiction brings?
Sometimes the subject of our research has been obliterated by time. For the research into Kate Warne’s life, I had to rely on Allan Pinkerton’s writing. But the Great Fire that wiped out Chicago in 1871 destroyed Pinkerton’s detailed record-keeping of his operatives and cases. So what I could find of her was very limited.
What is your favorite thing about research?
It is endless! It’s like falling down a rabbit hole.
What’s your least favorite thing about research?
It is endless! It’s like falling down a rabbit hole!
What’s one of the most interesting things you’ve learned while researching?
There was a whole lot of Underground Railroad research in my book, as well as the buildup to the Civil War. And best of all, Abe Lincoln. I learned so many interesting things by reading so much about this era. I’d say the most interesting thing I read, among so many wonderful anecdotes, had to do with the connective tissue of Life.
People might already know this one, but it was fascinating to me to learn that Lincoln’s son Robert was once saved from grave injury or death by John Wilkes Booth’s brother, Edwin Booth, a popular actor. Robert Lincoln was waiting for a train in 1863 or ’64 when he was jostled by the crowd and fell into the gap between a moving train and the platform. Robert Lincoln recalled the incident later:

. . . the train began to move, and by the motion I was twisted off my feet, and had dropped somewhat, with feet downward, into the open space, and was personally helpless, when my coat collar was vigorously seized and I was quickly pulled up and out to a secure footing on the platform. Upon turning to thank my rescuer I saw it was Edwin Booth, whose face was of course well known to me, and I expressed my gratitude to him, and in doing so, called him by name.

Such a human moment – one individual coming to the aid of another. We know what transpired just a year or so later between Edwin’s brother and Robert’s father. It reminds me how our lives are all so closely intertwined. And it’s one of the reasons why I love history!