** Pre-order giveaway for Jasper and the Riddle of Riley’s Mine! Now through February 6. Click through to learn more. **

Caroline Leech is a Scottish writer who moved to Texas for an adventure ten years ago. Her debut novel for young adults, WAIT FOR ME, will be published in the USA by Harper Teen on January 31st. Set in Scotland towards the end of World War Two, the book tells the story of a girl’s reaction to a German prisoner of war who is sent to work on her father’s farm. Harper Teen will also publish Caroline’s second YA novel in early 2018. Caroline lives in Houston TX with her husband and three teenage children, and she can be found online at www.carolineleech.com, or on Goodreads, Twitter, Facebook, Instagram or Pinterest. 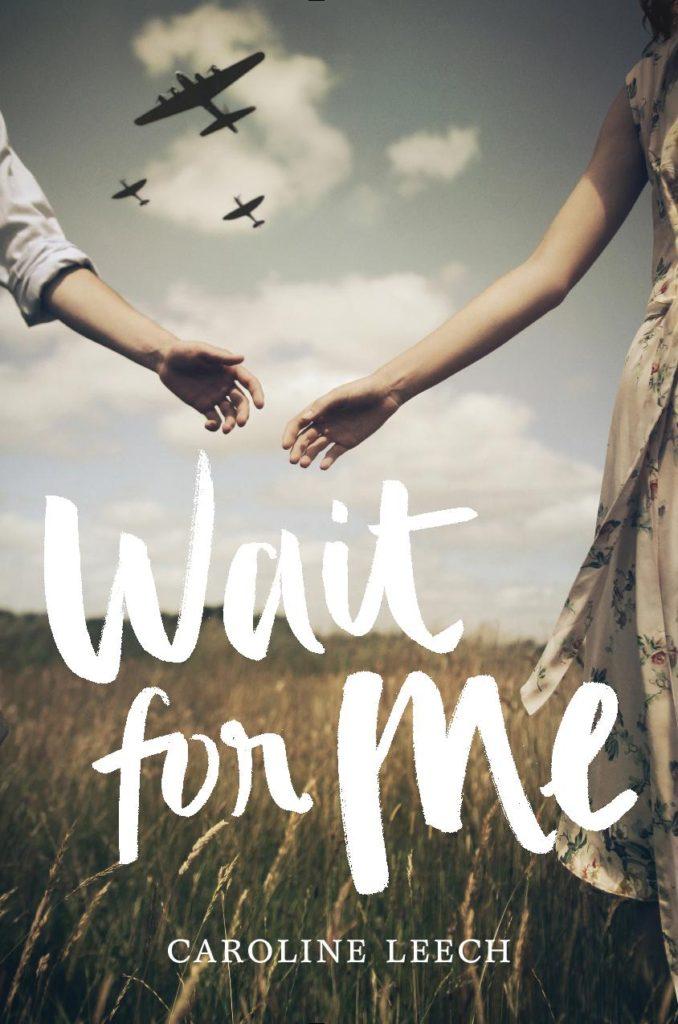 What typically comes first – a character, an era a story idea? And how do you proceed from there?

For WAIT FOR ME, the era was a given. I have always been fascinated by World War Two and have read a lot about it over the years, both in fiction and non-fiction. Both my parents were involved in the war, and so I grew up hearing about their experiences. But what gave me the idea for WAIT FOR ME was a chance remark made by a friend of mine, a story of something that happened to her father when he was a little boy in Wales during the war. A German prisoner of war had come to work on a family’s farm and gave my friend’s father a gift which he still treasures today. Hearing that tale set off the proverbial lightbulb in my head, and I immediately rushed off to find out more.

I read up on the POW camps which were set up all over the UK to house the sudden influx of German and Italian prisoners, particularly after after D-Day, and about German prisoners who were sent out to work as farmhands. Originally set in South Wales, I moved ‘my’ prison camp to Scotland for several reasons, though the decision to set the story in the village of Aberlady, near Edinburgh, came to me out of the ether and I just accepted it. I discovered only later that there had been a POW camp in the grounds of Gosford Hall, the stately home beside Aberlady, and then I found out much much later that there had even been romances between Gosford prisoners and local girls.

What sources do you use?

What did writers do before the Internet? I have no clue. There are so many first person accounts of events in history to find. Of course, we all have to be careful about checking the validity of the sources of any information we find online, but believe me, Google is a great place to start researching a book. ‘German prisoners of war working on Scottish farms” certainly did the trick to get me started. I found all sorts of useful organizations and publications to help me.

For example, I spent hours poring over Google Maps, ‘driving’ down the streets of the village to get my geography right, and zooming over the Gosford Hall estate . Of course, the village has developed considerably since 1945, but the National Library of Scotland has an amazing map website where you can not only look at maps going right back to the early 1800s, but you can overlay a historic map with a modern one, so you can see where any additional buildings or changes to road layout have happened. I could (and did) lose hours playing with that little toy.

I got in touch with the head of the Aberlady Heritage Society. Right now, he is immersed in archeological digs around the village – one is even on the site of my fictional farm – where they’ve found amazing Anglo-Saxon pieces. Even so, Ian was very helpful with my questions about life during World War Two in the village, and he gave me some lovely juicy pieces of local history which he will hopefully spot if he reads the book. I also studied photos in the Aberlady Heritage Flickr and East Lothian at War websites to get visual clues and inspiration for places and characters.

Of course, my parents were always happy to answer my questions about the war – would there have been jam or whisky in the shops in 1945, or what was the right name for the hat worn by a soldier in the Royal Scots? My dad was called up toward the end of the war, in 1944 when he turned 18, and he followed his four older brothers into the Army. I cannot imagine how my grandmother felt watching her five sons all go off to war one by one. Mum was a little younger, and in 1939 was evacuated from London with her little sister. They were sent to a farm in Oxfordshire, though they did eventually go back home again. Her father was a builder, and therefore was in what they called a reserved occupation, meaning that he was not allowed to join the military because his skills were felt to be more useful on the home front, reconstructing London buildings after they were so badly bombed.

After how long, or at what point, do you feel comfortable beginning to draft? How does your research continue once you begin writing?

That’s a hard question to answer, since I know that in the case of WAIT FOR ME and my current work-in-progress (another World War Two story which will be published by Harper Teen in 2018), I already had a certain level of background knowledge before I started thinking about these two novels. I therefore only had to research specific aspects of the circumstances around my particular stories, rather than filling all the background first.

Having said that, I knew I couldn’t wait until I knew every single thing from reading every single book before I started writing. After all, my books are primarily about the people and their relationships with each other, not about the historical events themselves. So I didn’t have to know every movement of every German regiment in the run-up to D-Day, or about the bombing of London in the Blitz. I just had to know enough so I could feel confident to write my characters’ stories within that context, without having to go and double check major historical facts every two sentences. Once the first draft was done, the basic skeleton of the story, I could then revise it, each draft adding in a new layer of information and characterization.

I suppose that’s a long way of saying that I try not to get bogged down in immense amounts of historical fact because it stops me writing. Every writer knows that there’s a very fine line between research and procrastination.

It can be very tempting to romanticize periods in history to the point where they become rose-tinted and therefore unreal. Even though I write romantic stories, I try to make sure the reader is offered the chance to understand how difficult life was for people living through the Second World War, or through any war, for that matter.

The other problem can be trying to balance the everyday beliefs of previous eras with today’s more progressive sensibilities. Having financial and social independence was unheard for women until relatively recently. Jane Austen’s heroines, living in the early 1800s, knew their future was entirely dependent on them marrying, and marrying well, no matter how clever or ambitious they were, because that is what society expected of them. Even by 1945, when WAIT FOR ME is set, women were encouraged to finish school and get a job or go to university. They were, however, still expected to stop working once they got married so they could stay home and look after the house and children. It can therefore be a challenge for an author to find a strong enough connection between historically realistic female protagonists and teenage readers of today who have been brought up to expect so much more than domesticity from their education, their opportunities and their futures.

History must be an important part of any education, whether at school, through life-long learning, and even through reading historical fiction, and watching movies and TV programs. Without an understanding of why and how a community, a country, a continent, a race of people got to the point at which it sits today, then the future can be terrifyingly uncertain, past mistakes can be repeated, and hostility between groups will continue unabated. But the way that history is reported – and sadly how it is very often taught – can be dry and dull, full of names and dates and treaties which students are expected to learn by rote, but which they might never be called upon to connect to their own lives. My son is still furious that he had to learn American history at school only a couple of years before Lin-Manuel Miranda’s musical, Hamilton, made that era so much more engaging and easier to remember.

Whichever time period you are interested in writing or reading, historical fiction can unlock the past in an immediate and accessible way, whether the protagonists were real-life figures or made-up ones living in real-life settings.

Historical fiction also offers readers a way of connecting to a period of time on a more emotional level. Textbooks explain what happened and when, and sometimes why, but seldom do they give the emotional perspective – how individual people reacted to an event and were changed by it, and whether they went out and made a difference to the world because of it. Even when the author adds in a touch of fantasy to an historical novel, that still counts. Rae Carson’s amazing gold rush stories, which begin with WALK THE EARTH A STRANGER, give readers an extraordinarily detailed account of the families who undertook the trail crossing to Oregon and California, showing us the poverty and brutality of their lives in the dangerous, if thrilling, gold rush era, but also their courage and unwavering faith that they would make it. The touches of magic that Rae includes certainly add excitement to the story, but at no point can the reality of the history be called into question.

Historical fiction can also be an invaluable rear-view mirror on our lives. Quite recently, I read Anne Blankman’s amazing duology, PRISONER OF NIGHT AND FOG and CONSPIRACY OF BLOOD AND SMOKE, set in Germany of the 1930s in the years building up to World War Two. Following a girl who was brought up within Hitler’s inner circle, the two books set out her gradual realization that her ‘Uncle Dolf’ was not the warm and generous man she always believed him to be, but was the brutal and bigoted dictator that we, the readers, know he was. What caught at my heart, however, was not Blankman’s depictions of Hitler’s brutality, but her descriptions of his magnetism and public-speaking skills, and how such a man could draw millions of people into such a warped mindset of hatred and aggression for other races, cultures or nationalities. The persuasion and seduction of Hitler’s words convinced the German people to hate anyone unlike themselves, and handed them what they believed was justification for the genocide we know now as the Holocaust.

I don’t have to say how relevant and resonant such a story is today, given the developing intolerance and violence within the United States and across the world. Eighty years might have passed since these books were set, but there are still lessons from history we should be learning from.