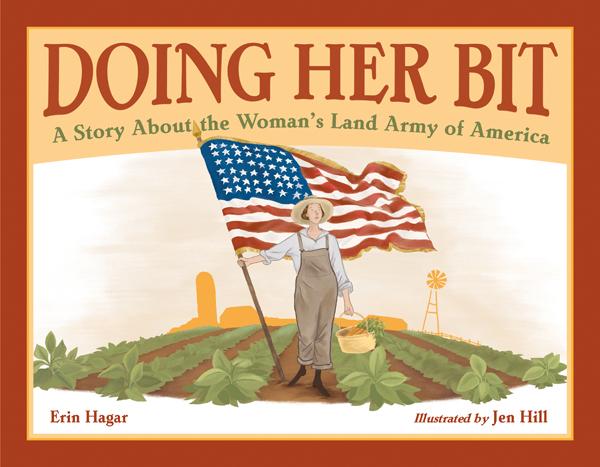 Many of us know about Rosie the Riveter. But what about her spunky older sister, the Farmerette? Based on real people and real events, DOING HER BIT tells the story of Helen Stevens, a New York City college girl who volunteered to serve her country during WWI by joining the Woman’s Land Army of America. Learning to farm to was one thing. But convincing skeptical farmers they could do the work? That was something else.
What typically comes first for you: a character? An era? A story idea? How do you proceed from there?
In this case, it was an NPR interview! Years ago, I listened to author Elaine Weiss  talk about her book about the Woman’s Land Army, a Progressive-era effort that was patriotic and revolutionary. As male farmhands engaged in war efforts, particularly moving from farms to factories, women trained as farm laborers and then were paid men’s wages to provide seasonal labor. I couldn’t believe I’d never heard about these women. And I knew kids would love this can-do story.

It took a couple of years to find the right way in to this book. At first, I wanted a group of women to be the main character, since they trained and worked in teams. But once I let Helen Stevens (a real Farmerette) take the wheel, the story really took shape.

Do you have a specific system for collecting data?

Oh, gosh, for physical stuff, it’s a mess of piles and stacks, partly because I’m working without an office. I prefer to be organized, though, I really do. The system in my imaginary office is amazing! Seriously, the writing program Scrivener has been a great way for me to organize my research and drafts. You can keep all kinds of files and websites in there, and pull them up right up alongside the text you’re writing to compare them side-by-side. I think Scrivener is worth the effort to learn.
What’s your favorite thing about writing historical fiction?
My first two books were non-fiction, and I thought DOING HER BIT would be, too. In fact, all the characters in the book are real, and many of the details come right from Helen Stevens’ own account of her experience. But I loved having the chance to create some dramatic moments that highlighted the Farmerette’s struggles to learn to farm and be taken seriously in their communities. Imagining the dialogue was a lot of fun, too. I guess my favorite thing about historical fiction is that you still feel those magic creative moments, when the story just clicks together, but you don’t have to create everything. The story’s raw materials are right there, waiting for you to find them.
Has your research ever affected the overall trust of your book? How so?
Yes, absolutely. I mentioned that it took me a while to figure out the shape of this book. For a long time, I wanted the Farmerettes to be a collective character–a unit– since that’s how they trained and worked. Early drafts were filled with passages like this:

… The government folks made speeches.  The farmers fretted.   And the women, well, they did what they’d always done.  They got together and figured out a way.

They recruited volunteers– women who were willing to uproot themselves from their colleges, their factory jobs, their families.  Together, those women learned how to work the land, to do their bit to serve their country.

But with no single Farmerette in the lead, the only character who really stood out was the farmer who had to decide whether to hire them. And that wasn’t the story I wanted to tell.
When I realized a single farmerette needed to be the protagonist, I rediscovered a New York Times piece that Helen Stevens wrote in 1918, describing her summer of service. I’d read it before and filed it away. But once I’d shifted my thinking, this same document was a magic treasure trove filled with juicy details I needed, like her fear of snakes and the horrible smell of the turnip plants. It was a great feeling to look at that document with new eyes.
Why is historical fiction important?
Whenever I start a project, I ask myself what would have interested child Erin in the topic. In the case of the Woman’s Land Army, child Erin might not have cared much about the WWI era or farming. But the idea that a group of people could uproot their lives to serve their country–moving to training farms, learning about every aspect of farming, exhausting their bodies –and then not get the chance to help farmers because they were women?  That sense of unfairness would have spoken to me. Historical fiction lets readers tap into those universal emotions and societal issues that always hover around us, and really feel what it might have been like to wear their work boots and get those blisters. That connection between emotion and history is everything.