Uma Krishnaswami is the author of over twenty books for children, from picture books (Out of the Way! Out of the Way!, The Girl of the Wish Garden, and Monsoon) to middle grade novels (The Grand Plan to Fix Everything and The Problem with Being Slightly Heroic). Her story collection, The Broken Tusk, has been in print twenty years. Uma’s chapter book, Book Uncle and Me, won the Scholastic Asian Book Award and the Crossword award (India). Uma teaches Writing for Children and Young Adults at Vermont College of Fine Arts. She lives in Victoria, BC, Canada. 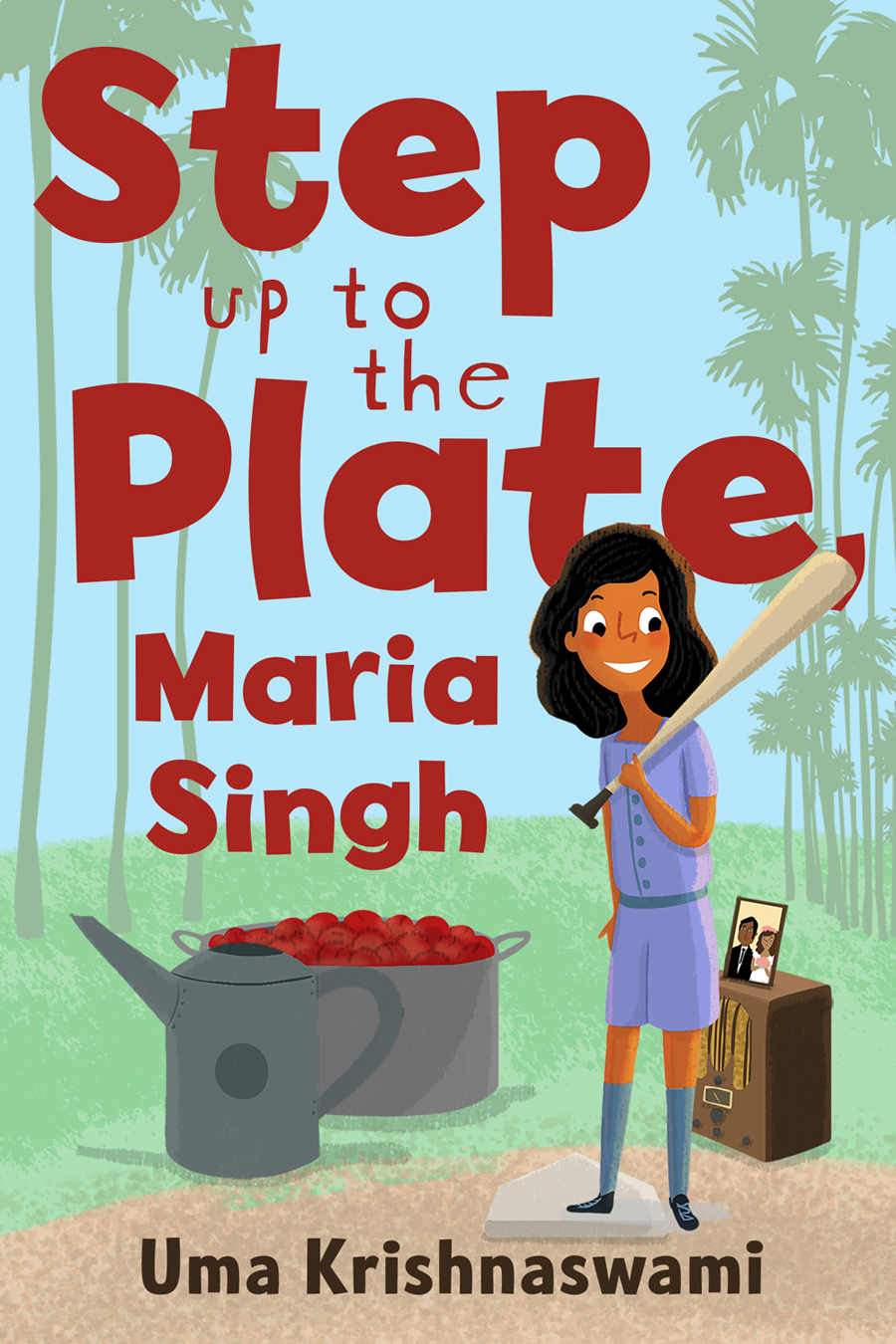 What came first for you in the creation of STEP UP TO THE PLATE, MARIA SINGH: a character? An era? A story idea? How did you proceed from there?

In a way, I had known the vaguest outline of this story for years. As a child growing up in India I’d heard rumors of men from the Punjab who had emigrated to Canada and the US, generations before anyone in my own south Indian family had ever set foot in a foreign land. In the 1990s, when I lived in Maryland, I came across a documentary by filmmaker Jayasri Majumdar Hart. Titled Roots in the Sand, it was about a culturally blended community in California in which the men were from the Punjab province of India and the women were from Mexico. They were kind of caught in a tangle of xenophobic legislation—miscegenation laws, land ownership prohibitions, all of it aimed at these foreigners of color.

They made choices that helped them survive. Their children grew up speaking Spanish but also maintaining very particular, intangible, but deeply felt connections to the heritage of their fathers. That movie seeded the idea in my mind of one such family, with two young children—they were Emilio and Maria from the start. The time was initially the 1930’s but when I began to do my research it became clear to me that the 40s were a much more fruitful time for the story I was trying to tell—the war, the burgeoning Indian independence movement, and women struggling to find their places in factories and on the ballfield. Eventually Maria’s story grew into this novel.

How did you conduct your research?

I suppose the way I learn about anything. I read. I read ethnographic studies and first person accounts. Later on, I found the late Ted Sibia’s wonderful online collection pertaining to this little-known part of American history and that in turn led me to real people with connections to these immigrants.

In thinking about the process, I am inclined to interpret the word “conduct” in its musical sense, the direction of the performance of a piece of music. In that sense I don’t think I conducted the research so much as it conducted me. One source would lead to another and in time I was off and running.

You do have a specific system for collecting data?

A system? Absolutely not.  If anything, collecting data for this book felt like a treasure hunt. When I read a book or article I would turn to the acknowledgements and the sources listed at the end, and then I’d try to round those up.  I did keep a running list of everything I read.

One thing I should clarify is that this book took a very long time to develop. I first started writing the book in 2003, but the idea had been percolating for at least three or four years before that, so I’d been gathering information during that time. Some mini-systems I used along the way included lists, tables, and eventually a Scrivener folder. I used them all and ended up abandoning most of them. So what I really want to say is this to anyone starting out on this process. Do not get bogged down in the details of tracking and documenting research material. Remember that the research is important but documenting it is not the art form. The novel is the art form.

What kinds of sources did you use? The more specifics here, the better!

That documentary film was my very first formal source, as was Karen Leonard’s wonderful ethnographic study, Making Ethnic Choices: California’s Punjabi Mexican Americans. From there I moved on to first person accounts by descendants of the Punjabi Mexican families. Old photos provided me with a sense of what the family in my story could have looked like, or how the father might have appeared in his police uniform before he left his native India.

In 2011, I did something I’d longed to do for some years—I visited Yuba City, California. I met with several descendants of those early settlers. That was an incredibly moving experience. They shared so much with me, including the company of a couple of elders who would have been children right at the time I was writing about. What a gift! Finally, I spent a couple of days at local libraries, pulling maps and phone books and newspapers of the period. I spent a few hours walking along the streets of Yuba City with a 1945 map in hand. Slowly, I began to see the place through the filters of another time.

I also did some more generic research that was pertinent to the storyline and not only to this particular community. Maria plays softball. I was lucky to find a copy of the 1945 Official Softball Rules—thank you, eBay! I got a feel for wartime rationing from this website with lovely “homefront” images.

One of the Punjabi Mexican family members had said something about seeing old baseball newsreel reruns at Smith’s theater, so this video of Babe Ruth coaching girls came in handy.

I’m sure there was more but those are the ones that come to mind.

How long did you research before beginning to draft?

I think I read and absorbed information for at least a couple of years before I wrote anything. I was working on other projects at time and this was a kind of quiet brainstorming time for me. It almost felt like recreation!  I was learning for the sake of learning and not worrying too much about how it could possibly shape itself into a story. I think if anyone had told me I was going to write a novel using any of that material I would have panicked and shut down completely.

What’s was your favorite thing about writing this historical novel?

Well, I will admit that I write for entirely selfish reasons, so I will say my favorite thing was how I found myself growing into the story, becoming the writer that the novel needed me to be.

I’d been working on it in many, many forms. At various times, I’d visualized it as a picture book, a short story, nonfiction and finally the historical novel it became.

Even as a novel, its first several drafts had so many holes! Gaps of logic, gaps in my research, thinness in the characters, clichéd dialogue: all kinds of problems, each of them needing significant time and effort to address. Each of them demanding something new and different from me. Looking back now, I am very, very glad that although it was acquired in 2003 by Lee and Low, STEP UP TO THE PLATE, MARIA SINGH is only now getting ready to see the light of day in 2017. The time it took, and the growth I saw not only in the story but in myself—those will be my enduring memories of working on this book.

What were some obstacles to writing this work of historical fiction?

Well, no one had written this story or anything like it for children. That was a terrifying thought right there. What would the living descendants of these families say about my efforts? And sure, I’m from India, but this is not my immediate culture in any way—I’m not Punjabi, not Mexican, not a ball player, not a Californian. Whoa! What was I thinking? And yet…this story would not leave me alone and at some point I realized that I needed to step over those brambly questions of authenticity and listen to the voices of these kids. I needed to pay attention to why this story spoke so urgently to me. And when I did go and meet the descendants and felt the warmth of their welcome, I realized  I had to gather my courage and do this work.