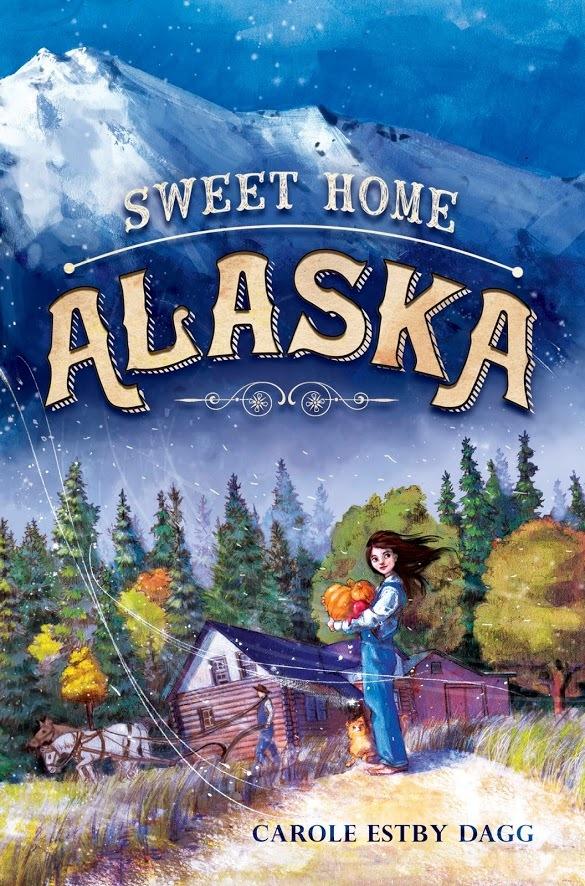 Terpsichore Johnson is thrilled when her family is chosen for the Depression-era program that would transport 202 families from northern Wisconsin, Minnesota, and Michigan all the way to Alaska to be self-sufficient farmers. She had always loved Laura Ingalls Wilder’s books, and now she was going to have a chance to be a pioneer, just like Laura Ingalls.

She hadn’t realized, though, just what pioneering would mean – giving up inside plumbing, electricity, and even libraries! Worse yet, fumbled management of the project leaves some families in tents as the first snow falls.

Despite challenges, Terpsichore comes to love Alaska. Her mother, however, still misses their home in Wisconsin. What could Terpsichore do to make her mother love Alaska like she does? She hatches a plan that involves a giant pumpkin and a recipe for Jellied Moose Nose.

What drew you to this story?

When I think of the Depression, I think of the dust bowl, college-educated men selling pencils on the street corner, and lines at the soup kitchen. I never realized that New Deal programs extended up to Alaska until my son moved to Palmer, Alaska and bought a rustic cabin on the outskirts of town next to a potato field.

I’ve always liked old houses, and in researching the history of the early days of Palmer, I discovered transcriptions of interviews of old-timers who had moved up with the program in 1935. What a trove of first-hand accounts! If other people also hadn’t heard about the history of the Palmer Colony, maybe I should write a book about it. I couldn’t use all the incidents they described, but I combined many of them and assigned them to my fictional Terpsichore and her new friends. 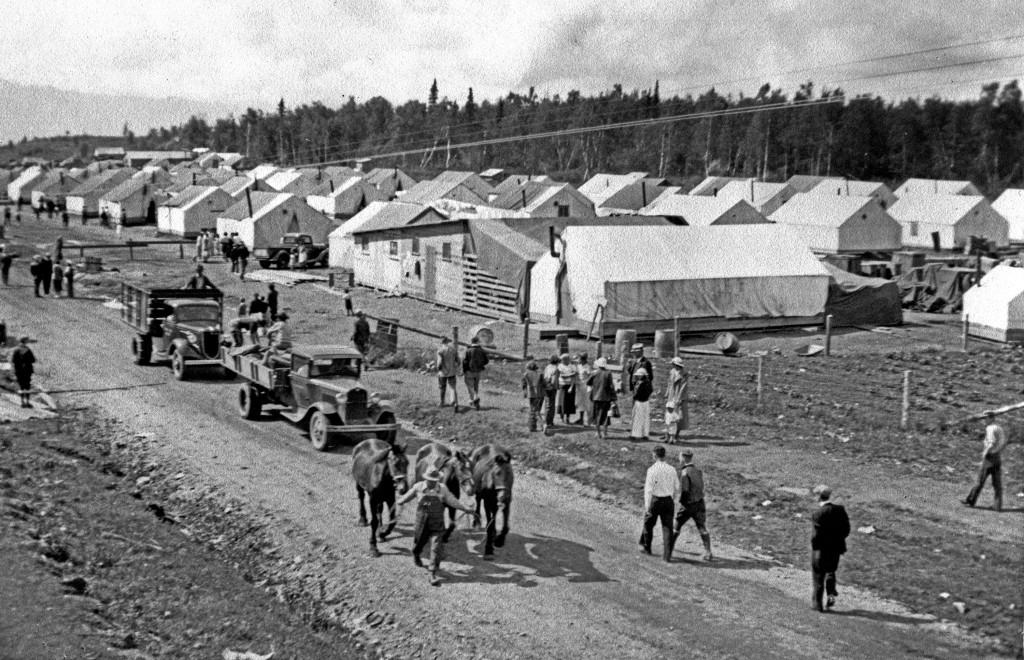 I love the AHA! moments when I find just the right info to connect the dots between previously known facts. Or to discover new info about historic characters I thought I knew. For instance, who knew that Will Rogers and his pilot, Wiley Post spent one of their last days visiting the Palmer Colony before crashing near Barrow, Alaska?

I discovered a recipe for Jellied Moose Nose – someone on the Internet rated it as one of the ten most revolting foods.

The other oddest incident I ran across also involved a moose. A grave was dug the day before a funeral and during the night, a moose fell into it. The graveside service had to be delayed until the attendees figured out how to get the moose out of the hole. I wish I’d figured out a way to include that incident into the book! 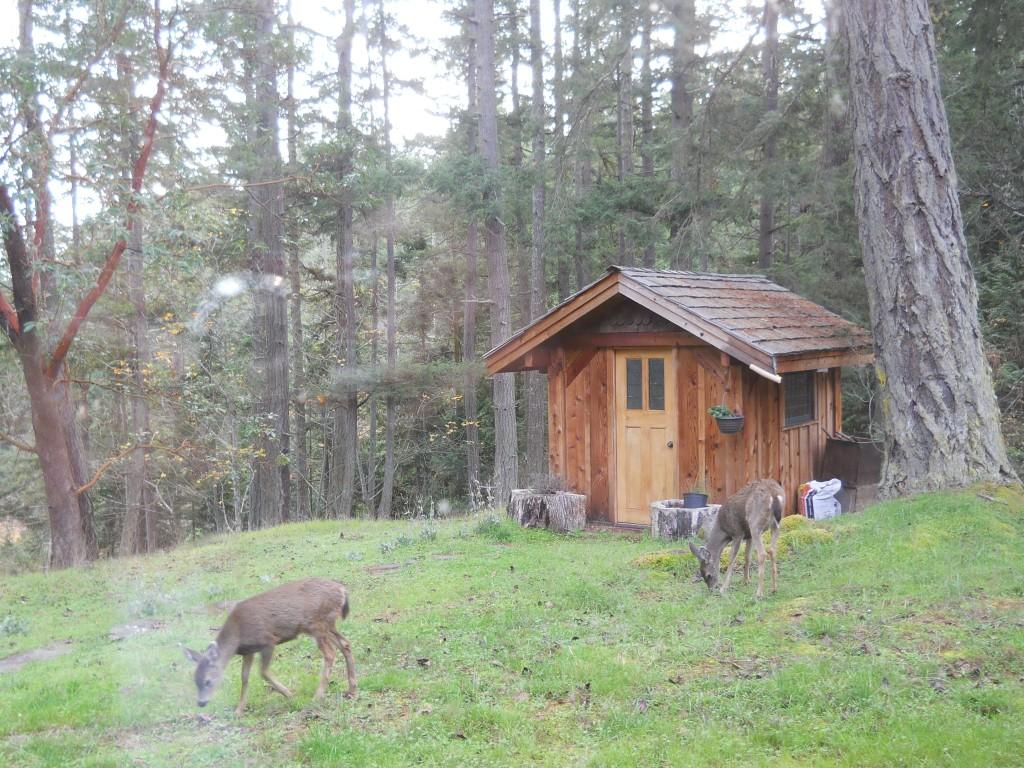 I’ve always been charmed by your writing cabin. Could you tell us a little about it?

My writer’s shack started out as a wood shed – cement foundation with sturdy posts at the corners to support a roof. It’s one of the nicest spots on our get-away property on San Juan Island. Facing one direction, there’s a sliver of a view through the trees of Mosquito Pass. Facing the opposite direction, there’s a view of Garrison Bay and English Camp, established during the mid-1800’s when English and Americans were trying to decide which country owned the island.

Those views were too good to waste on a wood shed, so I asked my husband if I could claim it as my writing spot. I thought we’d just close in the sides with plywood and run an electrical wire out, but my husband found salvaged, leaded-glass windows for the view sides and had a small door custom made.

It’s only 7 feet by 8 feet, but it has all I need. I have a flat door held up by sawhorses for a desk, two lights, and a plug-in for an electrical heater so I can use it year-round. It’s about 30 paces from the house and another cup of tea.

What are you working on next?

My next book will be based on the Pig War, which took place on San Juan Island.

Enter to win your own copy of SWEET HOME ALASKA below. The contest closes Wednesday, February 17. US residents only, please. 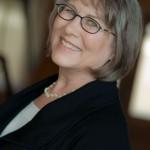 . She was born in Kansas City, Missouri, and has lived in Washington, Idaho, and British Columbia. She has degrees in sociology, library science, and accounting. Her real-life adventures include tiptoeing through King Tut’s tomb, sand boarding the dunes of western Australia, riding a camel among the Great Pyramids, paddling with Manta rays in Moorea, and smelling the penguins in the Falkland Islands. She is married with two children, two grandchildren, a husband, and a bossy cat who supervises her work. She splits her writing time between her study in Everett, Washington, and a converted woodshed on San Juan Island.