This first volume of Maud’s journals covers her life from ages fourteen through thirty-five. She starts as a school girl (not above school yard spats and secret indulgences in novels during lesson time); studies at Prince of Wales College and Dalhousie University; teaches three years in different communities in Prince Edward Island, works one year as a copyeditor at a Nova Scotia newspaper; experiences six* proposals, two engagements, and one secret love affair; and spends more than a decade as her grandmother’s companion and caretaker, all the while reading, writing, and dreaming of the literary life.

There are countless directions I could take this post, but for the sake of true discussion, I wanted to comment on a few things that struck me and raise questions to those of you who have also read. You’ll see I’ve had so much to say I’ve decided to run a second discussion post on Wednesday and a more quotes I found interesting on Friday. I invite readers to take us anywhere you’d like in the comments below. 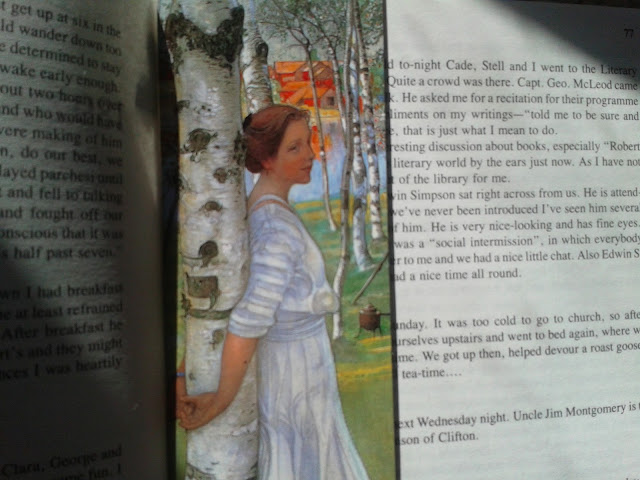 The Literary Life:
All my life is has been my aim to write a book — a “real live” book… Well, I’ve written my book. The dream dreamed years ago in that old brown desk in school has come true at last after years of toil and struggle. And the realization is sweet — almost as sweet as the dream!

Maud’s first novel, ANNE OF GREEN GABLES, sold to L.C. Page and Co., the fifth publishing house she submitted to. While on the surface, this looks like an easy thing, she had been tirelessly writing, submitting, and selling short stories and poems for over fifteen years. Writing had become a daily part of her life, as had a faithful study of the magazine market.

Blessings be on the inventors of the alphabet, pen and printing press! Life would be — to me in all events — a terrible thing without books.

As well as writing, Maud read broadly and deeply. She often re-read childhood favorites, studying to see if they held up as the years passed but also refusing to let popular opinion sway her preferences. She compared author’s newer works to their older titles, pursued the bestsellers and the classics, and collected phrases that spoke to her (reminding me of my commonplace book).
After selling ANNE in 1907, she quickly went on to sell the sequel, ANNE OF AVONLEA,  KILMENY OF THE ORCHARD (a story re-worked story that had previously run as a magazine serial), and THE STORY GIRL (her personal favorite).

The road of literature is at first a very slow one…and I mean to work patiently on until I win — as I believe I shall, sooner or later — recognition and success.

Wednesday’s discussion will focus on the two lives Maud often felt she lived and the process of recording a life through journaling.


*Have I forgotten someone or accidentally added someone else in? Mr. Mustard, Lem, Lou, Edwin, Ewan, Oliver.