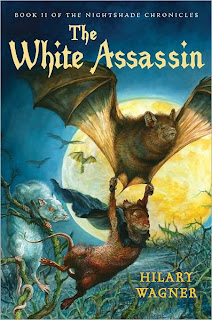 
About the THE WHITE ASSASSIN:
Book II in the Nightshade Chronicles begins three years after Juniper and his rebel band of rats liberate the Catacombs and defeat their oppressors.

A sense of peace has settled over Nightshade City, but it is a false one. Billycan, the white assassin, has been found. Deep in the southern swamps, he now rules a primitive horde of savage swamp rats eager to overrun Nightshade City and claim it for their king. With the help of an ancient colony of bats and an uneasy alliance with the swamp snakes, Juniper and his Council set out to thwart Billycan’s plans. When an old secret is revealed—one so shocking it shakes both Billycan and Juniper to the core—the fate of Nightshade City and the life of Juniper’s only son depend on Juniper’s decision: should he help his mortal enemy? The past resurfaces with devastating impact in this exciting sequel to Nightshade City, a dark tale of intrigue, deception, and betrayal.

Nightshade City, Book I of the Nightshade Chronicles, is a CBC Best Book of 2011 and a Crystal Kite finalist.

Enter to win an advanced reader copy of The White Assassin:

What middle-grade novel including mice and/or rats is Hilary’s favorite? Leave your answer in the comments section. Those with the correct answer will be entered to win. Contest closes Tuesday, 20 October.