I’ve known the birthdate of a casual acquaintance for 30 years, yet I don’t know that of a dear friend, only that he received his first driver’s license on the anniversary of Pearl Harbor Day.  Why? The juxtaposition of a “day of infamy” and the possibilities of a new driver’s license struck a wry chord in my teenaged brain. As for the acquaintance, he was born on the same date as the fictional Bilbo Baggins, someone with whom I am much closer. The reasons that I can recite three poems from memory after more than thirty years are as divergent as the poems themselves.  There are no lessons for teachers here.  I learned them through osmosis, spitefulness and happenstance, in much the same way that I remember birthdays.

In fifth grade, I had a teacher that I neither liked nor disliked.  In fact, I remember only one thing about her.  She had a haughty, old-school manner of speaking – except for one day, when her detached manner slipped away as she recited Henry Wadsworth Longfellow’s “The Arrow and the Song,”

I shot an arrow into the air,
It fell to earth, I knew not where;
For, so swiftly it flew, the sight
Could not follow it in its flight.

I breathed a song into the air,
It fell to earth, I knew not where;
For who has sight so keen and strong,
That it can follow the flight of song?

Long, long afterward, in an oak
I found the arrow, still unbroke;
And the song, from beginning to end,
I found again in the heart of a friend.

It was the second verse that caught in my mind and my own thoughts soared like the song, out of a dreary 5th grade classroom and into the limitless sky.  Later, I taught myself the rest of the verses.  I’ve been able to recite it ever since.  I like it still.

In Junior High School, I had an Algebra teacher that I disliked a great deal.  In the summers, he was a barker on the boardwalk at the Jersey Shore.  He was a wise guy in a tough school.  So was I.  One day he announced that anyone who could memorize and recite Lewis Carroll’s “Jabberwocky” to the class on a pre-ordained date, would be exempt from taking an Algebra test.  After securing a copy of the poem, I realized what a challenge it would be.   Despite my disinclination toward public speaking and the difficulty in memorizing this poem in particular, he had thrown down the gauntlet and I would pick it up.

‘Twas brillig, and the slithy toves 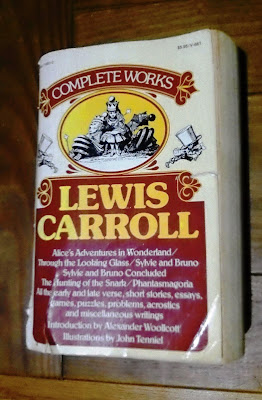 Did gyre and gimble in the wabe;
All mimsy were the borogoves,
And the mome raths outgrabe.

“Beware the Jabberwock, my son!
The jaws that bite, the claws that catch!
Beware the Jubjub bird, and shun
The frumious Bandersnatch!”

He took his vorpal sword in hand:
Long time the manxome foe he sought—
So rested he by the Tumtum tree,
And stood awhile in thought.

And as in uffish thought he stood,
The Jabberwock, with eyes of flame,
Came whiffling through the tulgey wood,
And burbled as it came!

One, two! One, two! and through and through
The vorpal blade went snicker-snack!
He left it dead, and with its head
He went galumphing back.

“And hast thou slain the Jabberwock?
Come to my arms, my beamish boy!
O frabjous day! Callooh! Callay!”
He chortled in his joy.

‘Twas brillig, and the slithy toves
Did gyre and gimble in the wabe;
All mimsy were the borogoves,
And the mome raths outgrabe.

I memorized and recited that poem.  I became interested in the works of Lewis Carroll.  I asked for a book of his collected works for Christmas.  I read them all, and I’ve never forgotten the poem. There are seldom opportunities for speaking it aloud, but imagine my surprise and delight when I saw Tim Burton’s Alice in Wonderland.  I smiled to myself, knowing that I was likely the only one in the theater who knew that the plot of the movie was not the book, Alice in Wonderland, but the poem, “Jabberwocky.” I knew the ending before the movie barely begun.

Chance brought me to the last poem in my verbal repertoire.  As a librarian, I know not to judge a book by its cover – but I still do.  As a teenager, I was perusing my local bookstore when I came upon a most appealing little book. It was cute, it was yellow, and from its cover, the pensive little man pondering the universe called out to me.  It begged to be read. The book was Grooks by Piet Hein, a Danish mathematician, inventor, scientist, designer, and yes, poet.  Grooks, I discovered, were a style of poem invented by Hein, rhyming aphorisms, really.  They were clever and succinct, and I loved them.  For over 30 years, one Grook has stayed with me.  I recite it aloud – to myself, to my children, to whoever is near whenever things don’t go as they’ve been carefully planned.

Our choicest plans
have fallen through,
our airiest castles
tumbled over,
because of lines
we neatly drew
and later neatly
stumbled over.

And so there are three; and more diverse they could not be:  “The Arrow and the Song,” “Jabberwocky,” “On Problems.”  Teachers and poets, take heart.  The mind is a curious thing.  You may not know what will unlock the mind’s door to receive your poems, but you can ensure that they keep knocking. Sooner or later, one (or three) will get in.
Lisa Taylor is a children’s librarian in New Jersey.  She blogs regularly at Shelf-employed and the ALSC Blog.  You can contact her on Twitter @shelfemployed.