In an effort to give readers a taste of MAY B., I’m sharing books with similar genres and themes. Today’s topic is verse novels — stories told through unrhymed poetry. A confession here: I haven’t read any of these yet, though I’m planning on reading them all. All descriptions come from Amazon.com. 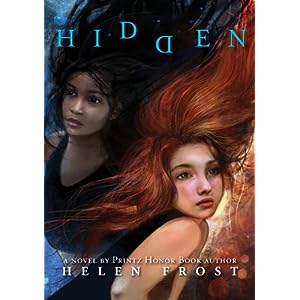 When Wren Abbott and Darra Monson are eight years old, Darra’s father steals a minivan. He doesn’t know that Wren is hiding in the back. The hours and days that follow change the lives of both girls. Darra is left with a question that only Wren can answer. Wren has questions, too.

Years later, in a chance encounter at camp, the girls face each other for the first time. They can finally learn the truth—that is, if they’re willing to reveal to each other the stories that they’ve hidden for so long. Told from alternating viewpoints, this novel-in-poems reveals the complexities of memory and the strength of a friendship that can overcome pain

Inside Out and Back Again – Thanhha Lai (2011 National Book Award winner)
For all the ten years of her life, HÀ has only known Saigon: the thrills of its markets, the joy of its traditions, the warmth of her friends close by . . . and the beauty of her very own papaya tree.
But now the Vietnam War has reached her home. HÀ and her family are forced to flee as Saigon falls, and they board a ship headed toward hope. In America, HÀ discovers the foreign world of Alabama: the coldness of its strangers, the dullness of its food, the strange shape of its landscape . . . and the strength of her very own family.

This is the moving story of one girl’s year of change, dreams, grief, and healing as she journeys from one country to another, one life to the next.

What started out as girls’ games became a witch hunt. Wicked Girls is a fictionalized account of the Salem witch trials told from the perspectives of three of the real young women living in Salem in 1692.

Ann Putnam Jr. plays the queen bee. When her father suggests that a spate of illnesses within the village is the result of witchcraft, Ann grasps her opportunity. She puts in motion a chain of events that will change the lives of the people around her forever.

Mercy Lewis, the beautiful servant in Ann’s house, inspires adulation in some and envy in others. With a troubled past, she seizes her only chance at safety.

Margaret Walcott, Ann’s cousin, is desperately in love and consumed with fiery jealousy. She is torn between staying loyal to her friends and pursuing the life she dreams of with her betrothed.
With new accusations mounting daily against the men and women of the community, the girls will have to decide: Is it too late to tell the truth?

What are some verse novels you’ve enjoyed?